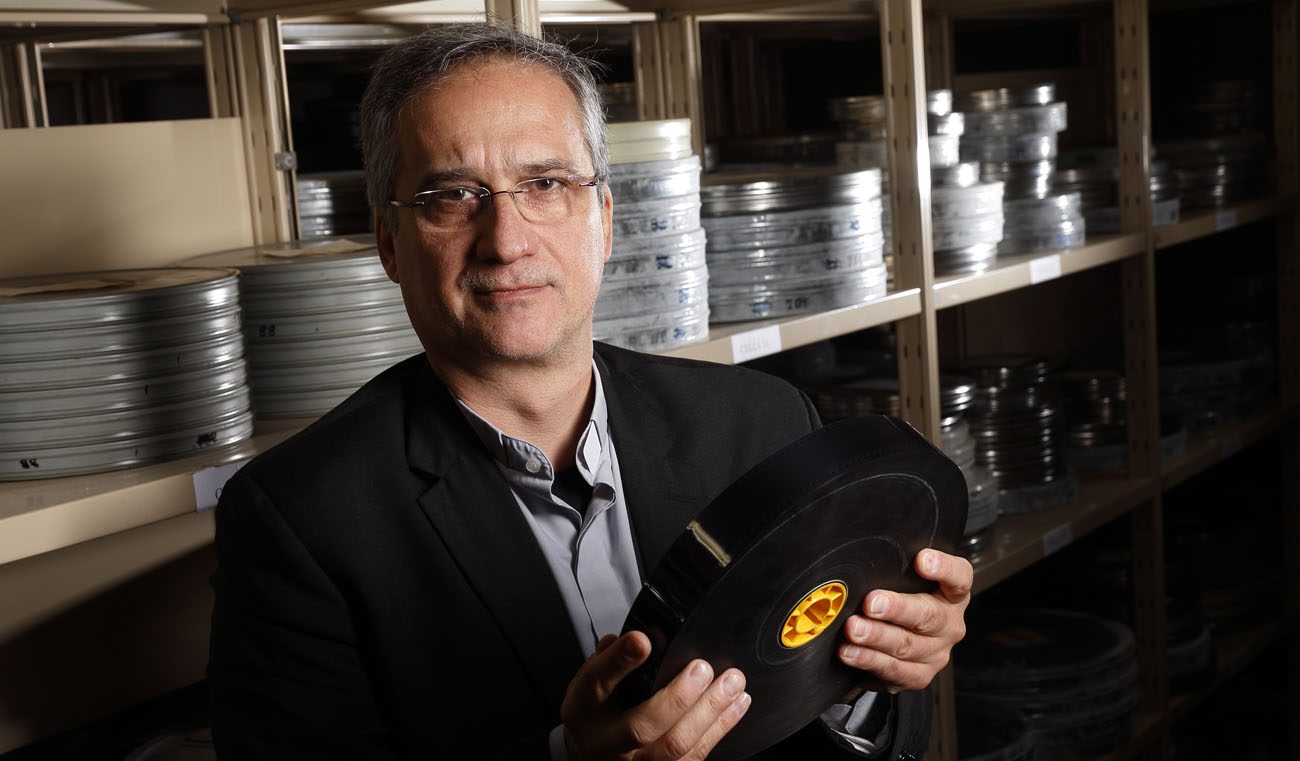 Msgr. Dario Vigano, assessor in the Vatican Secretariat for Communication, poses for a photo in the film storage room at the Vatican May 17. Msgr. Vigano said his office authorized production requests for about 90 television and documentary projects at the Vatican in 2017. (CNS photo/Paul Haring)

VATICAN CITY (CNS) — In early May, dozens of movie extras dressed as cardinals milled around the streets outside St. Peter’s Square. One member of the film crew told The New York Times: “This is the dominion of Netflix.”

But when it comes to filmmaking inside the square or on Vatican property, only the Secretariat for Communication can claim pontifical authority.

Created by Pope Francis in June 2015 as a means of unifying the Vatican’s communications offices, the secretariat fields all requests from film producers for access to Vatican property and the pope.

The Vatican receives many requests for “images of the Vatican Gardens, the Sistine Chapel, St. Peter’s,” said Msgr. Dario Vigano, the former prefect of the secretariat, who currently serves as a top counselor to the office. “We are the reference point for these requests from various international production houses.”

In 2017 alone, the secretariat reviewed and authorized production requests for about 90 TV and documentary projects focusing on the artistic, cultural and spiritual patrimony of the Vatican or the daily activities of Pope Francis, Msgr. Vigano said.

A green light is given based on the quality of the proposed project, without preference for big or small budget projects, language group or country, Msgr. Vigano told Catholic News Service May 17.

A Japanese made-for-television documentary called “Michaelangelo’s Vatican,” a German TV special on the 90th birthday of retired Pope Benedict XVI, and a French project highlighting women working at the Vatican are among the bigger projects Msgr. Vigano’s office recently authorized.

Even the Netflix claim to “dominion” over a set in the shadow of the St. Peter’s colonnade was not absolute. The production company requested rights to archival images of the 2005 and 2013 conclaves from the Vatican for the film they are producing on the relationship between Pope Benedict and Pope Francis, he said.

Until the Wim Wenders documentary “Pope Francis: A Man of His Word,” which premiered in early May at the Cannes Film Festival, the current pontiff was never directly involved in any motion picture.

Pope Francis often “told me that he isn’t an actor and doesn’t want to be an actor,” Msgr. Vigano explained.

On that basis, he said, the Vatican had always denied requests from production companies to make a day-in-the-life film of Pope Francis, as had been done with Pope Pius XII and St. John XXIII.

But the Wenders documentary “was a little different. Why? Because (the pope) was in front of a very poetic director, a Christian director, of great sensibility,” Msgr. Vigano said. “We had a guarantee to be present in the production step by step.”

Above all, the pope, in merely explaining themes important to his pontificate, wouldn’t be acting, he said.

“It is Bergoglio explaining Bergoglio,” he said, using the pope’s given last name, “and in the end, a great film was released, in my opinion.”

For most requests, a comprehensive application process is the first step toward Vatican approval.

In addition to listing the desired filming locations and equipment to be used, applicants must disclose their interview subjects, an overview of questions to be asked and an outline of the film’s purpose and content.

“If questions arise in reading the script, we ask that a part be clarified,” Msgr. Vigano said of the review process, but a film is neither rejected or accepted on that basis alone.

The priest, who has a doctorate in the history of cinema, said he wants to help filmmakers “better say the things they have to say,” but in the end, “a film is a film, it’s not a catechism.”

When the Media Projects Office of the secretariat agrees to cooperate with a film in development, there “a pact of trust” that the filmmaker will not misrepresent the church, he said.

“Of course, that doesn’t mean blind trust,” Msgr. Vigano said. “I must know who is in front of me — at least those things that I can know.”

According to Elizabeth Lev, an art historian who has been a consultant for several major film and television projects, including director Ron Howard’s “Angels and Demons,” the element of risk explains why the Vatican prefers documentaries and doesn’t cooperate with fiction films.

“They don’t do that kind of filming in the Vatican,” Lev said, “mostly because it’s something that you no longer control.”

“What happens with that footage in a creative piece of work can always be altered,” she said.

On the other hand, the emphasis on documentary film makes sense if the goal is evangelization, Lev said.

The Vatican is “very open to the Information Age’s desire to know through seeing,” she said. “People like documentaries because they feel like they are a witness to something.”

But Lev suggested that the Vatican should reconsider cooperating with certain fictional movie productions.

For example, much of the art produced for St. Peter’s Basilica over the centuries “is narrative, personalized interpretations,” she said, and “that’s how we end up with the Pieta — a completely different, totally innovative interpretation of a scene that never happened in the Gospel.”

“And obviously Bernini, had he lived today, would have been a movie director. The way he unites all of the arts, he is thinking of something that is much more 360 artistically,” Lev said.

On the other hand, the current principle that “you can put no constraint on art whatsoever,” makes it difficult for the church to make works of art like it once did, she said.

“Rome is very limited in terms of where it is and the structures it has and the means it has” to promote new faith-based cinema, said Irish Bishop Paul Tighe, adjunct secretary of the Pontifical Council for Culture.

“What I think would be important would be to ask different bishops’ conferences around the world to engage locally with some cinema makers and with TV makers,” he said.

What is really needed to promote good cinema is to encourage, locally, film students “to think about and reflect how they would portray issues of faith” on the big screen, he said.

NEXT: Not just what you see: Some issues behind the Israel-Palestinian violence