Not just what you see: Some issues behind the Israel-Palestinian violence 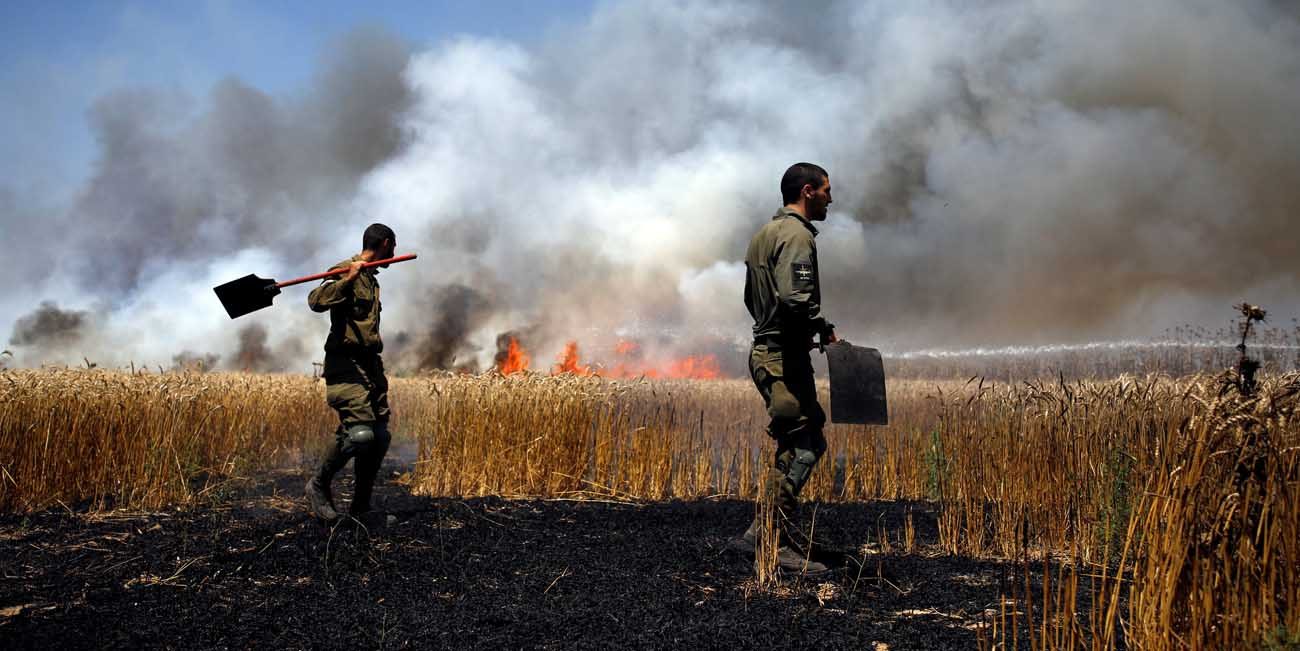 Israeli soldiers near near Mefalsim extinguish a fire on the Israeli side of the border between Israel and Gaza May 14. (CNS photo/Amir Cohen, Reuters)

UPDATED – JERUSALEM (CNS) — Sometimes, news is not just what meets the eye on the TV screen or a social media post.

Catholic political analyst Wadie Abunasser noted that while neither Israel nor the Palestinian political movement Hamas is interested in starting a war at the moment, both are interested in delivering strong messages to the other side on various issues being negotiated through backdoor channels. Internal politics also contribute to the situation, he said.

One issue on the table, he said, is a prisoner exchange being negotiated by the Egyptians. The exchange involves the bodies of two Israeli soldiers held by Hamas since the last Gaza war and three Israeli civilians — an Israeli-Ethiopian and two Israeli Bedouin — held by Hamas. All three civilians crossed into Gaza willingly, and two have mental health issues.

“(Israel and Hamas) are trying to press each other, and there is no real mutual understanding,” said Abunasser, director of the International Center for Consultations in Haifa. “What I am afraid of is not a prepared war, but of incidents getting out of hand if this continues.”

Egyptian negotiators are also at work trying to calm the current situation, he said.

The demonstrations were first called to protest the U.S. embassy move to Jerusalem, and to mark the 70th year since al-Naqba, or what Palestinians call their catastrophe — the creation of the State of Israel.

“We are talking about two neighbors who dislike each other,” said Abunasser.

The status of Jerusalem was one of the issues to be discussed when the two sides finally returned to the negotiating table, and neither side was to take unilateral action, he said. Though it was the U.S. decision to move the embassy, Israel is seen as having lobbied strongly for it and for the relocation of other embassies as well.

“The fact that (U.S. President Donald Trump) is downgrading and avoiding any relations is bringing the Palestinians to a very embarrassing situation. They are basically boycotting the USA and have brought back their representative from Washington,” Abunasser said. “Many people believe Trump is not a good friend of Israel. He is pretending (to be), but he is causing more problems than solutions.”

Abunasser also said internal Palestinian politics is playing a role in the growing tensions. Palestinian President Mahmoud Abbas has been cutting funds to Gaza, which is under control of Hamas, Abbas’ rival. Abbas wants to force the Hamas leadership to comply with his conditions for reconciliation, said Abunasser.

“So Hamas is trying to kill two birds with one stone. They are pressing back on Israel … (about) concessions to Hamas on the prisoner exchange, and Hamas is pressing against the Palestinian Authority (with the protests) and, if people are killed, the PA has to pay (their families),” he said. “Hamas, Israel and the PA are fighting each other until the last Gazan. It is very sad, really.”

He said 2 million people live in the cage known as Gaza, which has been blockaded for 11 years, since Hamas took control there. Much of the infrastructure of Gaza has been destroyed by the Israeli military.

Abunasser said Hamas does not want to risk Gazans taking out their anger on political leaders, so it is trying to divert the anger instead toward Israel. Gazans are pawns in the confrontation, he said.

Numerous children have been killed in the demonstrations, including an 8-month-old baby, who died of tear gas inhalation and whose death made emotional headlines on both social media platforms and news media. But doctors at a Gaza hospital are now saying that the baby may have had a prior medical condition that may have caused her death. And the question begs asking as to why such a young baby was within the vicinity of the demonstrations where it is known that there is extreme violence.

While placards and other Hamas media have urged people to go to the border where tent cities have been set up within range of tear gas volleys, Israel has warned Palestinians to stay away from the border fence or they will be shot.

Gazans are but pawns in the confrontation, Abunassar said.

While Palestinians have been calling the protests “peaceful,” Hamas leader Salah Bardawil was shown on Palestinian TV saying that of 62 people killed in the Gaza demonstrations, 50 were from Hamas, which is listed as terrorist group by Israel, the U.S. and the European Union. More than 2,000 people have been injured in the demonstrations.

Israel has been criticized by the international community for its use of snipers and live fire against the demonstrators. Israel says its soldiers are trying at all costs to prevent Palestinians who would carry out terrorist attacks against Israeli targets from crossing into Israel.

Israel also says millions of dollars of damage has been caused to Israeli crops as Palestinians send kites with Molotov cocktails flying over the border fence, burning agricultural fields.

Abunasser said Israelis along the border live under constant tension of such possible attack. Numerous underground Hamas tunnels leading from Gaza into nearby Israeli communities have been destroyed by the Israeli in the past, making the fear of infiltration very real.

Gazans, said Abunasser, are under the constant tensions of the blockage, electricity shortages, no work, a lack of commodities and the inability to leave.

“People live on a day-by-day basis. But the Palestinians have it worse. In Israel there is a functioning government, and if there is a war, farmers will be compensated by the state. They can escape to the north,” he said. “Gaza Palestinians have no place to escape, financially or physically.”

NEXT: Pope calls on Chilean bishops to restore justice, care for abused