Iftar feast a gathering of fraternity, affection for Melkite patriarch 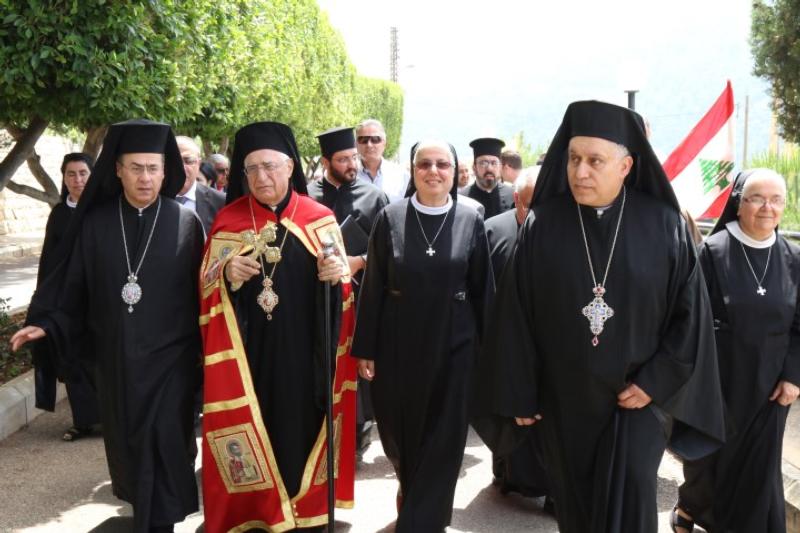 Melkite Catholic Patriarch Joseph Absi (in red) strolls through the ancient Mediterranean coastal city of Sidon in southern Lebanon May 26 with Melkite Archbishop Elie Haddad of Sidon, left. The Melkite Eparchy of Sidon hosted an iftar banquet that day. The patriarch’s visit to Sidon was the first to southern Lebanon since becoming patriarch in June. (CNS photo/courtesy National News Agency of Lebanon)

BEIRUT (CNS) — Christians and Muslims gathered in Sidon, Lebanon, for an iftar, the fast-breaking meal after sunset during the Muslim holy month of Ramadan.

“What a beautiful gathering we have on this memorable day of the holy month of Ramadan,” said Melkite Patriarch Joseph Absi to the more than 300 guests assembled for the May 26 banquet hosted by the Melkite Eparchy of Sidon, the ancient Mediterranean coastal city in southern Lebanon.

“And what is more beautiful is that we Christians and Muslims meet in the subject of our faith in God almighty,” he said.

Muslims abstain from eating and drinking from dawn to sunset during Ramadan.

The patriarch noted that for Muslims and Christians, their respective time of fasting — Lent for Christians and Ramadan for Muslims — has the same aim of “drawing closer to God.”

“What we are witnessing now in this gathering is the model that we believe in and we are holding on to … not just because it is our destiny but because the Bible scriptures teach us that Jesus put all his efforts and himself for the well-being of every human being.”

The patriarch praised Melkite Archbishop Elie Haddad of Sidon for his development and social projects for Christians and Muslims alike that “witness the message of Lebanon of living together in a rich and diverse environment.”

Guests dined at the grounds of Dar el Einayeh, an orphanage and school founded by the late Melkite Archbishop Georges Kwaiter of Sidon. The Sidon Eparchy has hosted an iftar annually since 2007.

The patriarch, pointing to the iftar gathering he attended with various faith leaders hosted by Lebanese President Michel Aoun, a Maronite Catholic, at the Presidential Palace noted that “the Ramadan tables in Lebanon are no longer an Islamic matter, but are of a national nature.”

“Ramadan tables are the tables of fraternity and affection,” the patriarch said.

It was Patriarch Absi’s first official visit to southern Lebanon since becoming patriarch in June. He is based in Damascus, Syria.

Sidon’s Shiite Mufti Mohammad Ousaylar told Catholic News Service that even apart from the iftar banquet “it was our duty to honor him and welcome him” to the city on his first visit to the south.

“Sidon has always been a model of coexistence,  welcoming, respectful and loving to its guests,” he said.

He said that welcoming the patriarch and jointly celebrating the iftar, is “a message that the people — Christians and Muslims — love each other and coexist and that the people want to be all united together.”

Unity, he said, “is important to everyone.”

Of Lebanon’s approximate population of 4 million, not counting refugees from war-torn Syria, about 40 percent are Christian.