Jesus in heaven invites all Christians to share his good news, pope says 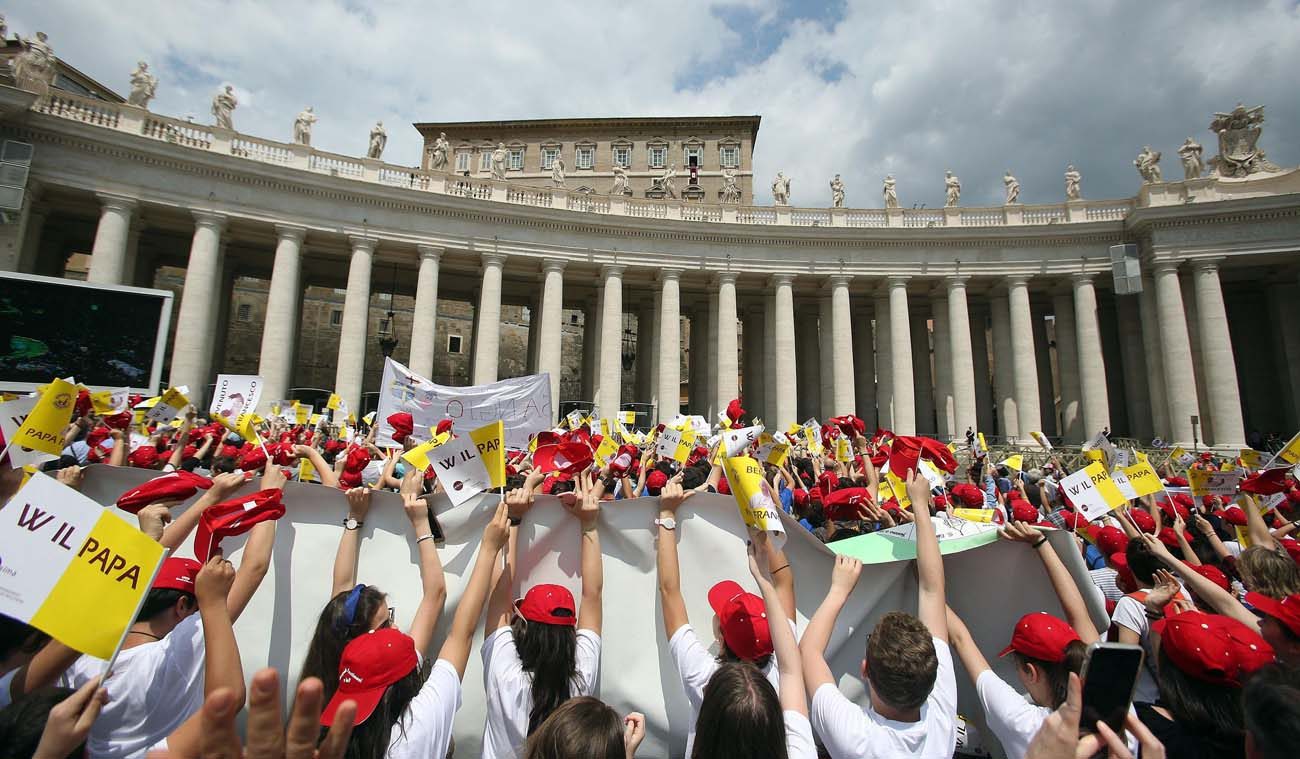 Young people wave as Pope Francis leads the "Regina Coeli" from the window of his studio overlooking St. Peter's Square May 13 at the Vatican. (CNS photo/Vincenzo Tersigni, EPA)

VATICAN CITY (CNS) — As they journey through life, Christians must look for Christ, especially among the poor, and give concrete signs of hope to others, Pope Francis said.

The ascension of Christ ushered in a “new form of Jesus’ presence among us,” he said in his “Regina Coeli” address to those gathered in St. Peter’s Square May 13, the day the feast of the Ascension was celebrated in Italy and many other countries.

The feast day comes 40 days after Easter and commemorates Jesus’ ascension into heaven. But some countries, like Italy, observe the feast day the following Sunday.

Pope Francis said the Ascension invites Christians to look to heaven, where Jesus was raised up in glory, and to look back down on earth to share and spread the good news and hope of salvation.

The feast marks the start of the church’s mission, because the risen and ascended Christ sent his disciples out to spread the Gospel to the whole world, the pope said.

“The task Jesus entrusts to a small group of men who are simple and without great intellectual abilities truly seems too audacious,” he said. “And yet, this tiny band of people — irrelevant before the great powers of the world — is sent to bring the message of love and mercy of Jesus to every corner of the earth.”

That same mission Jesus entrusted to his apostles with the support of the Holy Spirit continues today and requires the help of everyone, Pope Francis said.

Christians are asked to be “men and women of the Ascension, that is, seekers of Christ along the pathways of our times, bringing his word of salvation to the ends of the earth,” he said. “On this route we encounter Christ himself” in others, especially those who are suffering “old and new” forms of poverty.

Christ invites everyone, with the help of the Holy Spirit, to offer “concrete and visible signs of hope” because Jesus has given them hope.

After leading the “Regina Coeli” prayer, the pope also appealed for reconciliation and harmony in Indonesia and prayed for the nation’s people, particularly the Christian communities in the city of Surabaya.

Three suicide attacks there May 13 targeted a Catholic parish and two other Christian churches, leaving at least 14 people dead and more than 40 people injured. Police reported that the bombers were a family of six — a mother and father, two daughters, 9 and 12, and two sons, 16 and 18. It said they were linked to local extremist network that supports the Islamic State group.

The pope said he was praying for all those affected by the “serious attack against places of worship” and for the violence to stop. He asked that “everyone find room in their heart for feelings — not of hatred and violence — but of reconciliation and fraternity.”

PREVIOUS: Young people in the church need to be heard, not silenced, pope says

NEXT: After dam bursts, bishops urge Kenya to step up response to tragedies