Love is constant caring for others, pope says at parish visit 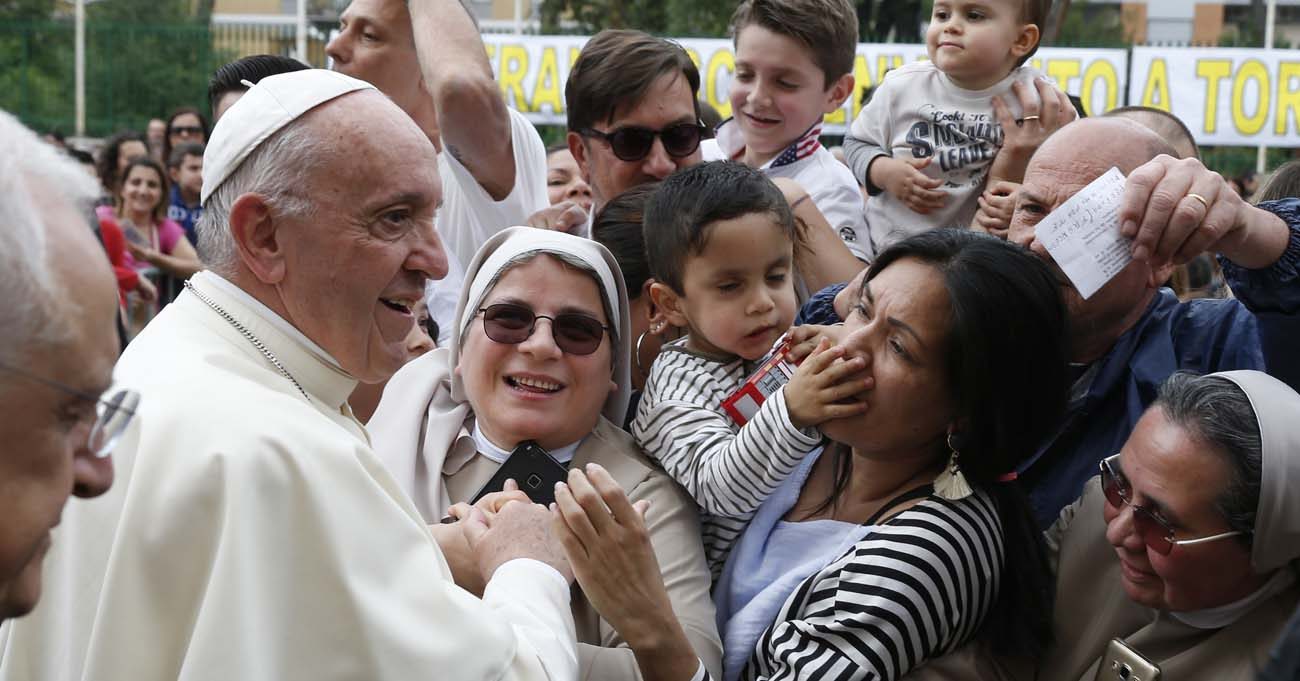 ROME (CNS) — Love is not all hearts and flowers or what is presented in a sappy romantic film, Pope Francis said. “Love is something else. Love is taking responsibility for others.”

Visiting Blessed Sacrament parish in the Rome suburb of Tor de’ Schiavi May 6, Pope Francis focused both on the day’s Gospel reading about “remaining” in Jesus’ love and on how parishioners were living that out or could undermine it.

“Love isn’t playing violins, violins, all romantic,” the pope said in his homily at Mass. “No. Love is work.”

But that work is not drudgery, he said. It brings joy.

Before celebrating Mass, the pope went up to what had been a series of storage rooms and classrooms on the floor above the church. The rooms have been transformed into the “Casa di Gioia” (“House of Joy”) and the pope blessed the premises.

Father Maurizio Mirilli, the pastor, explained to the pope that a few years ago, a group of older women who had children with disabilities shared with him their anguish over what would happen to their children once they were gone.

A little while later, he said, he went to a retreat preached by Philippine Cardinal Luis Antonio Tagle of Manila. At one point, the cardinal was commenting on the Gospel story where friends take the roof off the building where Jesus is so that they can lower down their paralyzed friend for Jesus to heal.

“The roof” was what struck Father Mirilli, he said. He immediately started thinking about the rooms above the church. Now, two years later, the rooms are home to seven people with disabilities, two religious sisters and a laywoman.

Cardinal Tagle and Salvadoran Cardinal Gregorio Rosa Chavez, titular cardinal of the parish, were present for the blessing and for the Mass that followed.

After his homily, Pope Francis asked the parishioners packed into the church to profess their faith out loud on behalf of Maya, a 12-year-old he was about to confirm. Maya has Leigh syndrome and is unable to speak. She and her mother, Paola Desideri, were confirmed together by the pope.

Desideri told TV2000, the television station of the Italian bishops’ conference, that some people had questioned the need for a child with such a serious illness to receive the sacrament. “We don’t know how much Maya understands, but why deprive her of the sacraments all other children receive when they are born into a Catholic family?” she said.

In his homily, Pope Francis had asked each person in the congregation to think about how well they respond to Jesus’ request, “Remain in my love.”

“Do I remain in the Lord’s love? Or do I leave it, seeking other things, forms of fun, other ways of leading my life?” the pope told them to ask. “To remain in his love is to do what Jesus did for us. He gave his life for us. He was our servant; he came to serve.”

Gossiping, he said, is the clearest sign that a person is not remaining in the love of Jesus. “The thermometer for knowing the temperature of my love is the tongue,” he said. “If I spoke ill of others, I did not love.”

Before blessing the group home and celebrating the Mass, Pope Francis fielded questions from parishioners outside.

Most wanted advice. He urged parents to “waste time” playing with their children, especially when they are small, because it is an important sign of love and opens a way to teach them many things, including about the faith.

A 15-year-old named Beatrice asked how she could convince her friends that church isn’t boring. Pope Francis responded that “sometimes they’re right,” and that everyone at a parish — including the priests, nuns and parishioners themselves — must make sure that the warmth of God’s love and the joy of the risen Lord shine on their faces and through the welcome they give.

Earlier in the day, Pope Francis had recited the “Regina Coeli” prayer with visitors gathered in St. Peter’s Square. There, too, he focused on the meaning of love in the day’s Gospel reading.

The love Christians are called to show others, he said, is not something that should be occasional “but must be a constant in our existence.”

“This is why we are called, for example, to care for the elderly as a precious treasure and with love, even if they create economic problems and difficulties. But we must care for them,” he said. “This is why we must give every assistance possible to the sick, even at the last stages. This is why the unborn always must be welcomed.”

“Life always must be safeguarded and loved from conception to its natural end,” Pope Francis said. “This is love.”

NEXT: Vatican releases pope’s schedule for visit to Geneva