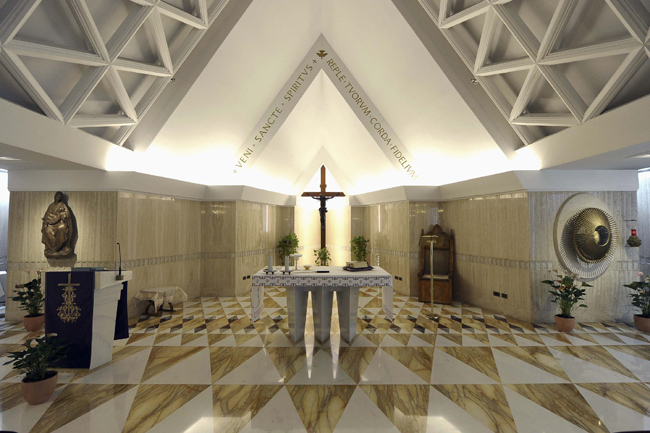 Pictured is the chapel inside the Domus Sanctae Marthae, where Pope Francis has celebrated 7 a.m. daily Mass for Vatican employees since his election. (CNS photo/L’Osservatore Romano via Reuters)

VATICAN CITY (CNS) — Marriage is a sacrament not only for the bride and groom, but for the entire Catholic Church, because it proclaims that “love is possible,” Pope Francis said.

“It is true there are difficulties, there are problems with the children or with the couple themselves — arguments, fights,” he said May 25 at morning Mass in the Domus Sanctae Marthae. Seven couples celebrating their 25th or 50th wedding anniversaries were among those present at the Mass.

But the witness of couples who continue in love, who overcome the difficulties, he said, proclaims the beauty of God’s plan for humanity.

In the day’s Gospel reading from St. Mark, Jesus is asked by the Pharisees if it is lawful for a husband to divorce his wife.

Most members of the crowds who followed Jesus listened to him because they were thirsting for truth and for help in growing in faith, the pope said. But he said the Pharisees were interested only in trying to trip up Jesus by trying to reduce religion to a list of “yes you can” and “no you can’t” items.

But Jesus raises the bar, talking about creation and describing “marriage as if it were the most beautiful thing” that God made at the beginning of the world, he said.

Jesus tells them: “From the beginning of creation, God made them male and female. For this reason a man shall leave his father and mother and be joined to his wife, and the two shall become one flesh.”

Jesus “leaves aside the problem of separation and goes to the beauty of marriage, to the beauty of the couple who are united,” the pope said. “That which is one must remain one. That is what the Lord says.”

“Sometimes there is the misfortune that it does not work and it is better they separate to avoid a world war. But that is always a tragedy,” the pope said.

So often, he said, people seem to want to talk about separation and divorce, like the Pharisees did, but Jesus’ approach is to talk about the beauty of marriage and how it is a reflection of God’s love for humanity.

Pope Francis ended his homily praying that “the Lord would give the church and society a deeper, more beautiful awareness of marriage.”

The pope had begun the Mass with special prayers, too, prayers for the “gift of tears” for each individual’s sins and “for all the calamities that make the people of God and the children of God suffer.”

For the morning Mass, Pope Francis had placed a special reliquary on a small table to the left of the altar. The reliquary holds a cotton ball with the liquid from the famous Weeping Madonna of Syracuse, Sicily.

A Rome parish was hosting the reliquary for a special celebration, and Pope Francis had asked that it be brought to the Vatican for a day, reported L’Osservatore Romano, the Vatican newspaper.

NEXT: Voters in Ireland pave way for abortion on demand