Voters in Ireland pave way for abortion on demand 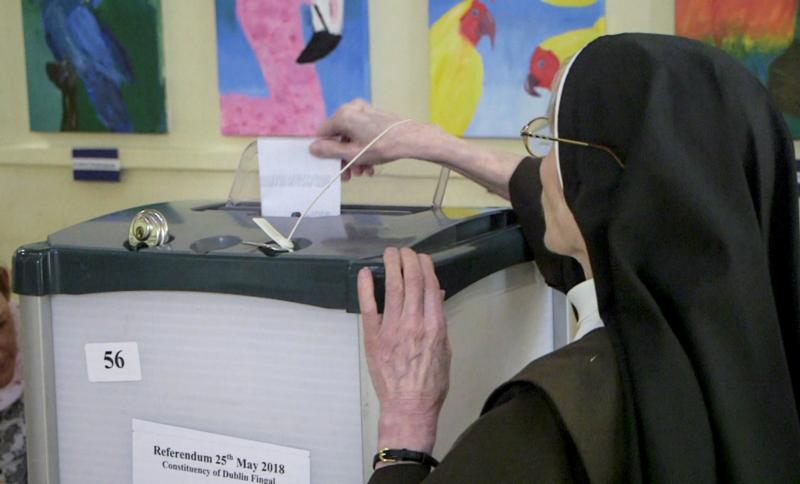 A woman religious casts her ballot May 25 in Dublin as Ireland holds a referendum on its law on abortion. Voters went to the polls May 25 to decide whether to liberalize the country’s abortion laws. (CNS photo/Alex Fraser, Reuters)

DUBLIN (CNS) — Voters in Ireland have opted to remove the right to life of the unborn from the country’s constitution, paving the way for abortion on demand up to 12 weeks.

Results from the nationwide referendum showed that 66.4 percent of citizens opted to remove the Eighth Amendment from the constitution, while 33.6 percent voted to retain it. Turnout was 64.5 percent.

That text will now be deleted and replaced with an article stating that “provision may be made by law for the regulation of termination of pregnancy.”

Bishop Brendan Leahy of Limerick told Massgoers May 26 that the result “is deeply regrettable and chilling for those of us who voted ‘no.'”

He said “the final result of the referendum is the will of the majority of the people, though not all the people.”

“It is a vote, of course, that does not change our position. Our message is one of love: love for all, love for life, for those with us today, for those in the womb,” he said.

Referring to Pope Francis’ Aug. 25-26 visit, Bishop Leahy said: “In August, we will unite as a family, to renew that sense of family when the World Meeting of Families comes here. We have the privilege of Pope Francis coming, and today I cannot think of his visit being more timely: to come here and remind us of the importance of family, of the love we have of family, of the reality that, yes, families get bruised sometimes, but they should never be broken.”

Minister for Health Simon Harris has said he would introduce legislation that would allow abortion on demand up to 12 weeks, up to 24 weeks on unspecified grounds for the health of the mother, and up to birth where the child is diagnosed with a life-limiting condition that means he or she may not live long after birth.

An exit poll conducted by the Ireland’s national broadcaster RTE asked voters what motivated them to opt for either “yes” or “no.” Among “yes” voters, the most important issues were the right to choose (84 percent), the health or life of the woman (69 percent), and pregnancy as a result of rape (52 percent).

John McGuirk, spokesman for Save the Eighth, which campaigned for a “no” vote, described the outcome as “a tragedy of historic proportions.”

“The Eighth Amendment did not create a right to life for the unborn child — it merely acknowledged that such a right exists, has always existed and will always exist,” he said, insisting that “a wrong does not become right simply because a majority support it.”

“We are so proud of all of those who stood with us in this campaign — our supporters, our donors, our families and our loved ones,” he said. “This campaign took a huge personal toll on all of us who were involved, and we have been so grateful for their support.”

Insisting that pro-life campaigners will continue their efforts, McGuirk told Catholic News Service: “Shortly, legislation will be introduced that will allow babies to be killed in our country. We will oppose that legislation. If and when abortion clinics are opened in Ireland, because of the inability of the government to keep their promise about a (general-practitioner-led health) service, we will oppose that as well.

“Abortion was wrong yesterday. It remains wrong today. The constitution has changed, but the facts have not,” he said.

Ruth Cullen of the LoveBoth campaign insisted that the organization will try to ensure that the Irish prime minister, or Taoiseach, Leo Varadkar, is true to his pledge that the government will work to ensure that abortions are rare.

“We will hold the Taoiseach to his promise that repeal would only lead to abortion in very restrictive circumstances. He gave his word on this, now he must deliver on it. No doubt many people voted for repeal based on the Taoiseach’s promises in this regard,” she said.

Commenting on the campaign, Cullen said: “We are immensely proud and grateful to all our volunteers throughout the country who worked tirelessly over recent months to ensure unborn babies would not be deprived of legal protections.

“The campaign to protect unborn babies will endure,” she said.

Eamonn Conway, a theologian at Mary Immaculate College in Limerick, told Catholic News Service he was “greatly saddened” by the result. However, he pointed out that “the truth is that the Irish Constitution merely recognized the right to life that is antecedent to all law. This most fundamental of all human rights is not extinguished or diminished because our constitution no longer acknowledges it. What is diminished is our constitution,” he said.

Conway said he believes “the task facing the Catholic Church now is to ensure that it makes every effort to accompany with the healing compassion of Christ everyone caught up in the tragic circumstances that surround an abortion … from grieving parents to medical practitioners.”

Archbishop Eamon Martin, primate of All-Ireland, was expected to address the referendum outcome during a homily at the country’s national Marian shrine at Knock, County Mayo, May 27.

NEXT: Pope, patriarch call for ethical intervention in economy