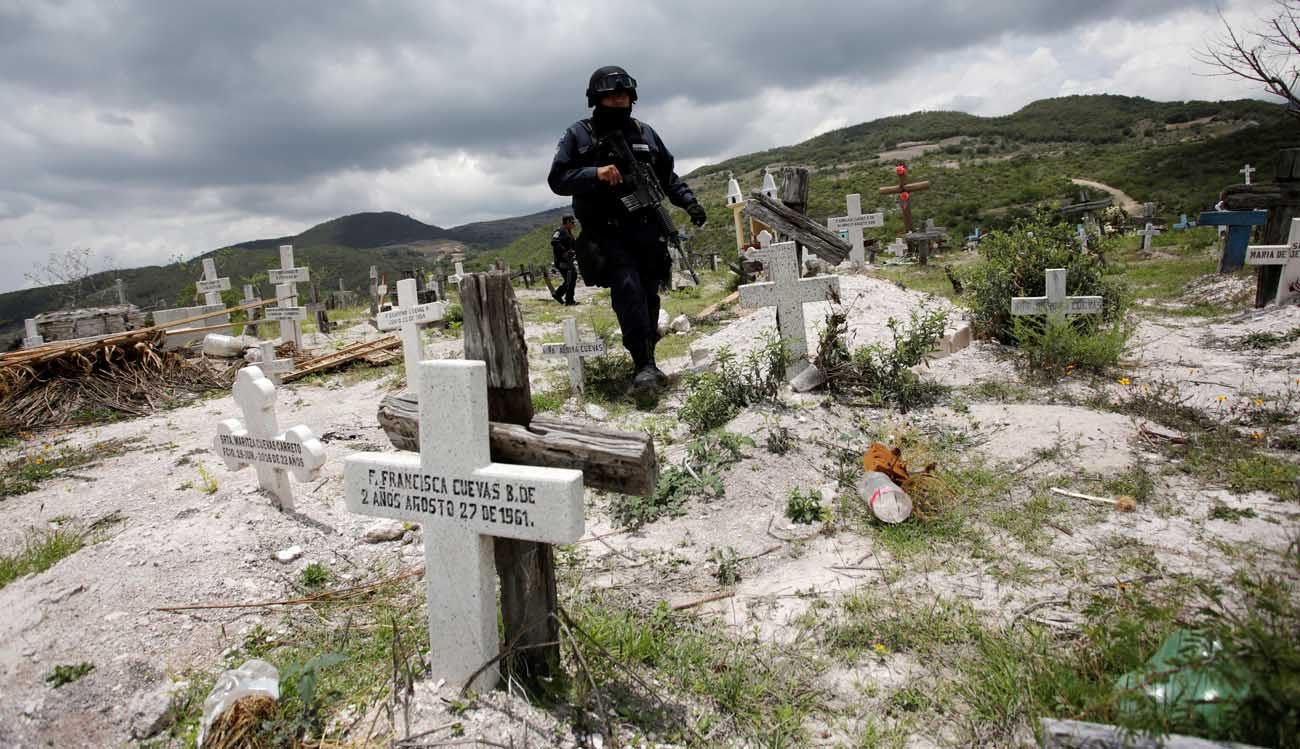 A federal policeman keeps watch at a cemetery as relatives of missing persons look for mass graves in Ahuihuiyuco, Mexico, May 10. (CNS photo/Daniel Becerril, Reuters)

MEXICO CITY (CNS) — The Mexican bishops’ conference has pledged to pursue a new pastoral vision, in which the church is considered close to the needs of the people, the poor are the priority and prelates speak prophetically on issues like violence, inequality and corruption among the elites, who currently count on the hierarchy as an ally.

The conference presented its pastoral plan May 13, saying it responded to the current state of the country and societal changes. The plan also responded to an admonishment from Pope Francis, who scolded Mexico’s bishops in 2016 for resting on their laurels, showing timidity as violence was escalating and failing to find unity among themselves.

“Recognizing ourselves as ‘iglesia pueblo’ (church-as-the-people) brings with it the need to adjust and update our theological concepts and incorporate them in their practical consequences, both personally and within the life of our Christian communities,” read the bishops’ document, titled, “Global Pastoral Plan 2031-2033. The dates coincide with the 500th anniversary of the country’s patroness Our Lady of Guadalupe appearing to St. Juan Diego and the 2,000th anniversary of Christ’s resurrection.

“Attitudes of individualism, pastoral jealousy, princely pretensions, arrogance and behaviors, which contradict a life of communion and participation, no longer have a place in the ‘iglesia pueblo,'” the bishops said.

Some 83 percent of the country still identifies as Catholic, according to census data, something an Archdiocese of Mexico City editorial noted when questioning the pope’s scolding of Mexico’s bishops and asking who advised him on the speech?

The bishops’ conference, however, took the speech as a call to action. Its document spoke with candor and sorrow that a country so Catholic and so fervent in its faith could convulse with violence and tolerate such shocking levels of inequality and corruption.

A crackdown on drug cartels, started 11 years ago, has claimed more than 200,000 lives and left more than 30,000 people missing. Even though Mexico has cast aside one-party rule, perceptions of corruption have climbed, even as the country became more democratic.

The bishops have often preferred silence on such complicated or controversial subjects, partly due to risks as priest are among the victims of violence; sometimes the bishops have spoken only after the government took the lead.

“We deeply regret the disappearance and death of thousands of young people in recent times, the femicides (murders of women). Rivers of blood have flowed through our towns and cities,” the document said.

“The introduction of a narco-culture in our Mexican society, of getting easy and fast money in any way, has deeply damaged the minds of many people,” it continued, adding factors were to blame, such as “the loss of values, family disintegration, the lack of opportunities, poorly-paid jobs, runaway corruption, ungovernability and impunity.”

The bishops’ document offered moments of self-criticism, including a recognition it has fallen short of addressing clerical sexual abuse. The bishops’ own behavior was brought up, with the acknowledgment, “At times we appeared more judges, owners or leaders of a human organization, than humble representatives of the project of the kingdom of God.”

The bishops added, “We see with concern that our people demand greater spiritual accompaniment and a special prophetic courage in the face of current circumstances.”

Other acknowledged shortcomings included its work with indigenous populations, young people and urban dwellers. Many of the latter have moved from impoverished and isolated pockets of Mexico in search of opportunities, only to “lose their roots,” suffer exclusion and live in exploitation.

“The church has been overwhelmed in attending to and accompanying this unprotected population,” the document said.

Popular piety has taken hold in many parts of Mexico, while many of the baptized understand little about the faith.

“There is a worrisome religious illiteracy in a great number of the believers,” the bishops said. “This manifests itself in the superficiality of their sacramental commitments and the lightness in living the values of the Gospel in their daily lives.”

The new pastoral plan presented 193 observations about the state of affairs in Mexico, but also actions for the Mexican church. The bishops committed to defending human rights, protecting migrants and incorporating “church social doctrine … in the formation of pastoral agents.”

The document also promised to provide accompaniment for those practicing popular piety and also victims of violence; promote participation in the sacraments, with an emphasis on the Eucharist; and to be “an inclusive church, where people are welcomed with mercy: couples marrying again, homosexuals, single mothers, the elderly, homeless and migrants, among others.”

NEXT: Chilean bishop says mistakes were made in handling abuse cases