Mexican cardinal-designate ‘very close to the people,’ did not seek power 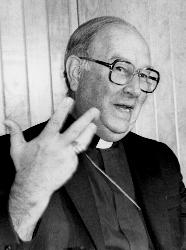 Retired Archbishop Sergio Obeso Rivera of Xalapa, Mexico, is pictured in a 1990 photo. Archbishop Obeso, now 86, was one of 14 new cardinals named by Pope Francis May 20. (CNS files)

MEXICO CITY (CNS) — Cardinal-designate Sergio Obeso Rivera, retired archbishop of Xalapa, left a towering legacy when he retired in 2007. He became a bishop at age 39, led the Mexican bishops’ conference for nine years and worked closely on ending the official estrangement between Mexico and the Vatican.

Pope Francis announced May 20 he would create 14 new cardinals, including Cardinal-designate Obeso, 86. Church observers called the elevation an overdue recognition for the prelate, whose pastoral approach and personal austerity are similar to those of Pope Francis but whose contemporaries received more recognition and were appointed to more prominent archdioceses.

“Coming from a relatively off-center diocese” — and being elected three times to lead the bishops’ conference — “gives you an idea of how influential he was among his peers,” said Rodolfo Soriano-Nunez, a sociologist, who twice interviewed the cardinal-designate. As a cardinal over age 80 and thus ineligible to vote for a new pope, “Obeso’s creation as a cardinal is merely symbolic, but it is a powerful message.”

The elevation of Cardinal-designate Obeso continues the pattern of Pope Francis promoting bishops from places considered peripheral and recognizing prelates whose pastoral work was previously overlooked or underappreciated. The announcement came barely a week after Mexico’s bishops, acting on the admonishment of Pope Francis, published a new pastoral plan. The plan committed the church to serving the poor, prioritizing human rights and speaking prophetically on issues such as crime and corruption.

“Obeso is one of the Mexican church’s brightest minds,” said Soriano, who remembers the cardinal-delegate as sharp-minded, personable and unassuming. “He comes from a totally different theological framework” than those being appointed to larger archdioceses during his career, Soriano added. He said Cardinal-designate Obeso did not share the worldview of Mexico’s longtime nuncio, Archbishop Girolamo Prigione. The nuncio was known to reward loyalty and often promoted bishops whom he had previously sent to impose order in dioceses where priests had been promoting liberation theology or pushing for democracy, at a time when Mexico had one-party rule.

Cardinal-designate Obeso was never one to seek stature or power. Soriano said the cardinal-designate successfully petitioned the Vatican to partition his archdiocese into three separate jurisdictions.

Since his retirement as archbishop, Cardinal-designate Obeso has continued to live near Xalapa, in the coffee-producing town of Coatepec.

He still celebrates Mass and baptizes and confirms children, said Father Jose Manuel Suazo Reyes, spokesman for the Archdiocese of Xalapa. Priests from the region seek his counsel, Father Suazo said, and the cardinal-designate is often invited to help with spiritual exercises organized by Mexican dioceses.

“He was a person very close to the people and, when he spoke with an ordinary person, he gave them time and paid attention,” Father Suazo said. “For us as an archdiocese, Don Sergio is a presently a pastor, a leader whom we love, recognize and respect. He’s a moral leader recognized inside and outside of the church.”

In 1931, Sergio Obeso Rivera was born into a prominent family, which founded and operates one of Mexico’s main supermarket chains. Yet colleagues described the cardinal-designate as austere and unassuming.

He entered the seminary in 1944, studied philosophy and theology in Rome and was ordained a priest there in 1954. Bishop-designate Obeso was appointed bishop of Papantla in 1971 but returned to Xalapa, the Veracruz state capital, in 1974 as coadjutor archbishop. He became archbishop in 1979.

“We recognize in (Cardinal-designate) Sergio Obeso a simple and austere man, extremely helpful and attentive to the social realities of Mexico,” the Mexican bishops’ conference said in a statement.

While in Xalapa, he promoted the canonization of St. Rafael Guizar Valencia, patron of the Archdiocese of Xalapa, and as a retired archbishop “continued celebrating worship and announcing the Gospel,” the bishops’ statement said.

NEXT: Pope prays that Catholics in China may live their faith in peace