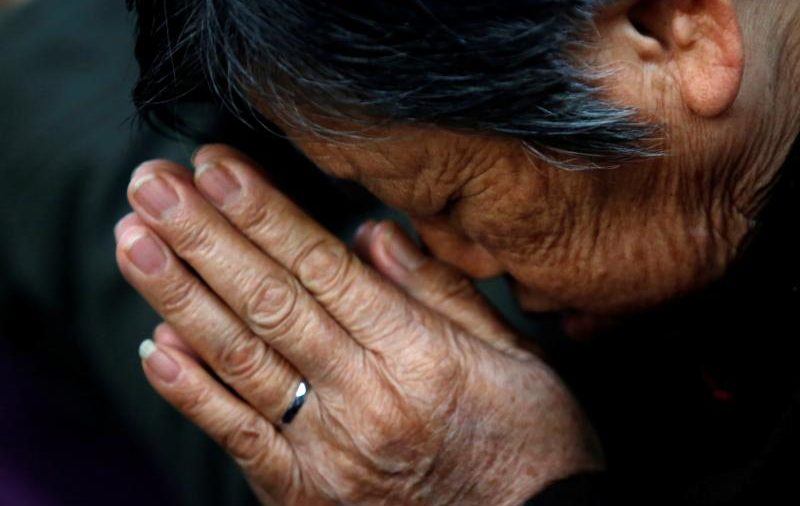 A elderly woman prays during a 2013 Mass at a Catholic church in Tianjin, China. (CNS photo/Kim Kyung-Hoon, Reuters)

VATICAN CITY (CNS) — Pope Francis asked people to pray for Catholics in China so that they may be able to live their faith with serenity and in full communion with the pope.

The Catholic Church celebrates the feast of Our Lady, Help of Christians May 24. In 2008, Pope Benedict XVI established the feast as a world day of prayer for the church in China because Mary is venerated under that title at the Marian shrine in Sheshan, outside Shanghai, China.

At the end of his general audience talk in St. Peter’s Square May 23, Pope Francis said the feast day “invites us to be united spiritually with all the Catholic faithful who live in China.”

He asked people pray to Our Lady so that Catholics there would be able “to live the faith with generosity and serenity” and so that they would know how to carry out “concrete gestures of fraternity, harmony and reconciliation, in full communion with the successor of Peter.”

“Dear disciples of the Lord in China, the universal church prays with you and for you so that even in the midst of difficulties you may continue to trust in God’s will,” he said.

Here is the prayer in English and in Chinese that Pope Benedict XVI released in 2008 on the occasion of the World Day of Prayer for the Church in China.

PREVIOUS: Mexican cardinal-designate ‘very close to the people,’ did not seek power

NEXT: Pope to meet with second group of abuse survivors from Chile