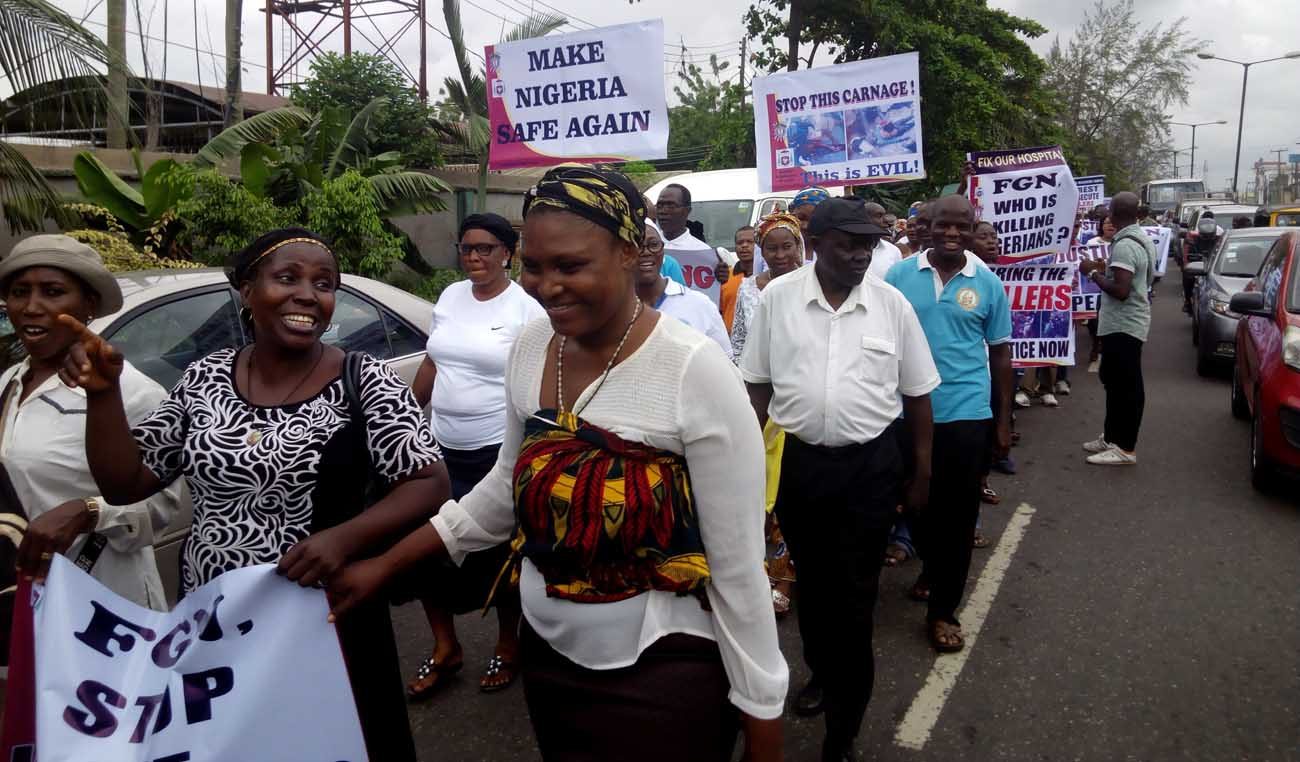 Nigerians carry placards during a May 22 protest in Lagos against the killing of innocent citizens, presumably by herdsmen, in some parts of the country. Catholics marched in various cities around the country. (CNS photo/Peter Dada)

LAGOS, Nigeria (CNS) — Catholic bishops in Nigeria led thousands of people across the country in peaceful protests against repeated killings by herdsmen in a conflict over fertile land.

Following a directive from the bishops’ conference, the May 22 protests took place the same day 19 people, including two priests, were buried in Ayati. Father Joseph Gor, Father Felix Tyolaha and 17 parishioners were killed during the celebration of Mass at St. Ignatius Catholic Church, Ayar Mbalom. Attackers also burned about 50 houses, nearly destroying the small community in Benue state.

Benue, in north-central Nigeria, is the state worst hit in the conflict over fertile land. Often fighting is between the mostly Muslim semi-nomadic herdsmen and predominantly Christian farmers.

Thousands of herdsmen have moved southward to flee spreading desertification in the North, putting pressure on dwindling fertile land amid rapid population growth. The herdsmen, mainly from the Fulani ethnic group, strongly oppose new anti-grazing legislation that was signed into law by the Benue state government in November.

In his homily at the funeral Mass for those killed in the church attack, Cardinal John Olorunfemi Onaiyekan of Abuja said: “Killing people in a place of worship is an assault on God. … Killing a priest of God is an abomination.”

There are “ugly rumors of a grand and mischievous plan for territorial conquest, ethnic cleansing and religious imposition. But only concrete and visible steps by the government can change that,” the cardinal said, according to national Nigerian newspaper This Day.

“We who are Christians need to counter the evil intentions of those who desire a nation that is soaked in blood,” Cardinal Onaiyekan told journalists earlier May 22.

“Our nation is in need of peace,” he said, noting that “the patience of those who speak peace and strive to live in peace is being overstretched every day.”

Nigerian Vice President Yemi Osinbajo told people at the burial that the killers would not go unpunished.

“The perpetrators of such dastardly and heinous crimes do not deserve to live among decent people,” he said.

Osinbajo said 492 people had died from attacks by herdsmen since the beginning of the year.

Bishop John Oke Afareha of Warri led more than 2,000 protesters from Sacred Heart Cathedral to the government house annex in Warri, where a statement was handed to a government representative.

“We cannot take to arms to defend ourselves but can arm ourselves with prayers and voice our displeasure to government,” Bishop Afareha said.

At a procession following Mass in Holy Ghost Cathedral in Enugu, Bishop Callistus Onaga noted that no arrests had been made in connection with the church massacre. He said the government should “shoulder the responsibility of security for everybody.”

Bishop Peter Kayode Odetoyinbo of Abeokuta said he believes that “some people know why and how” the attacks are happenings and called on the president and government at all levels “to help stop the killings.”

Bishop John Ebebe Ayah of Uyo told protesters that the church is unarmed and “will continue to depend on security provided by government.”

In Ibadan, Archbishop Gabriel ‘Leke Abegunrin led a protest march from Sts. Peter and Paul Major Seminary to the Oyo state governor’s office, where he called for the arrest and prosecution of the perpetrators.

“No words of sympathy or consolation have been addressed to the Catholic community in Nigeria for our loss,” Bishop Ayah said, noting that the perpetrators “live with us, they are in our midst.”

Leading a procession to government offices, Archbishop Alfred A. Martins of Lagos said farmers could not go to their farms and were not safe in their villages.

“We hear reports of the killers attacking the villages and feeding the yams (from) the barns of the inhabitants to their cattle,” he said, noting that the killers have now extended their acts of violence “to attacking people in their places of worship.”

PREVIOUS: Evangelizer bases work with parishes on her own journey to Catholicism

NEXT: Nicaraguan bishops denounce death threats against one of their own