Pope hears of ‘spiritual illnesses’ in parishes of his diocese 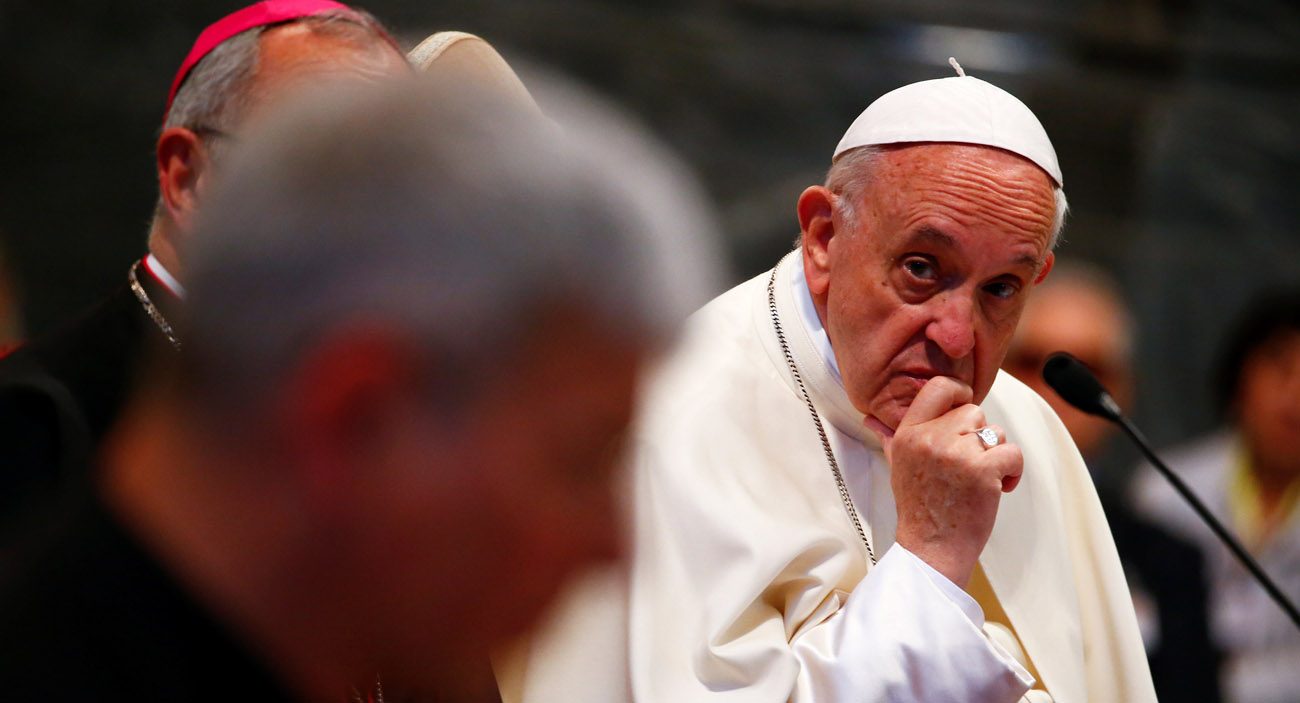 Pope Francis looks on during a meeting with leaders from the Diocese of Rome at St. John Lateran Basilica May 14. (CNS photo/Tony Gentile, Reuters)

ROME (CNS) — After months of study and discussion, the parishes of the Diocese of Rome have recognized “a general and healthy exhaustion” with doing the same things over and over, touching the lives of fewer and fewer people as time goes on, Pope Francis said.

Changing the way parishes — and their priests and involved laity — operate will not be easy, the pope said, but members of the diocese must set out to follow the Lord more closely, deal with the reality in their neighborhoods and learn how to show everyone living within the parish boundaries that they are recognized and loved.

Pope Francis addressed some 1,700 diocesan leaders, both clergy and laity, May 14 at the Basilica of St. John Lateran, the cathedral of the diocese of Rome.

In the process of identifying the “spiritual illnesses” of the diocese, the pope said, the priests and parish leaders made it clear that they are tired of being content with what they have been doing for years.

A renewed outreach, the pope said, must begin by “learning to discern where God already is present in very ordinary forms of holiness and communion with him.”

There are people in the parishes, he said, who might not know their catechism, but they see the basic interactions in their lives through a lens of faith and hope.

Calling for a “revolution of tenderness” in parishes and the diocese, Pope Francis said that while “guiding a Christian community is the specific task of the ordained minister — the pastor — pastoral care is based in baptism and blossoms from brotherhood and is not the task only of the pastor and priests, but of all the baptized.”

The pope’s speech marked his formal reception of a diocesan report on “spiritual illnesses” afflicting the city. Through a process that began in Lent, parishes identified the main challenges as “the economy of exclusion, selfish laziness, comfortable individualism, wars among us, sterile pessimism and spiritual worldliness,” according to a statement from the diocese.

The priest who summarized the findings at the evening meeting told the pope that a lack of education in the faith was identified by many of the groups; that lack was seen regarding basic church teachings but also regarding how the Gospel and its values could be brought to bear on modern problems.

Pope Francis told them the process of identifying the problems had two benefits: a recognition of “the truth about our condition as being in need, sick,” but, at the same time, a recognition that even if people have failed, God is still present and is calling his people to come together and to move forward.

“Our parishes,” he said, “must be capable of generating a people, that is, of offering and creating relationships where people feel that they are known, recognized, welcomed, listened to, loved — in other words, not anonymous parts of a whole.”

To move forward, he said, Catholic communities must look at “the slaveries — the illnesses — that have ended up making us sterile.”

Often, he said, parishes are slaves to doing things the ways they always have been done and to investing time and energy in projects and programs that no longer meet the needs of the people.

“We must listen without fear to the thirst for God and to the cry that rises from the people of Rome, asking ourselves how that cry expresses the need for salvation, for God,” he said. “How many of the things that emerged from your studies express that cry, the invocation that God show himself and help us escape the impression that our life is useless and almost robbed by the frenzy of things that must be done and by time that keeps slipping through out hands?”

Too often, he said, evangelization also is stifled by “faith understood only as things to do and not as a liberation that renews us at every step.”

Pope Francis asked the diocesan leaders to dedicate the next year to “a sort of preparation of your backpacks” for setting off on a multiyear process that would lead to a “new land,” a place marked by new pastoral action that is “more responsive to the mission and needs of Romans today, but also more creative and liberating for priests and those who directly collaborate in their mission and in the building up of the Christian community.”

NEXT: Jerusalem archbishop calls for prayers for peace as violence increases