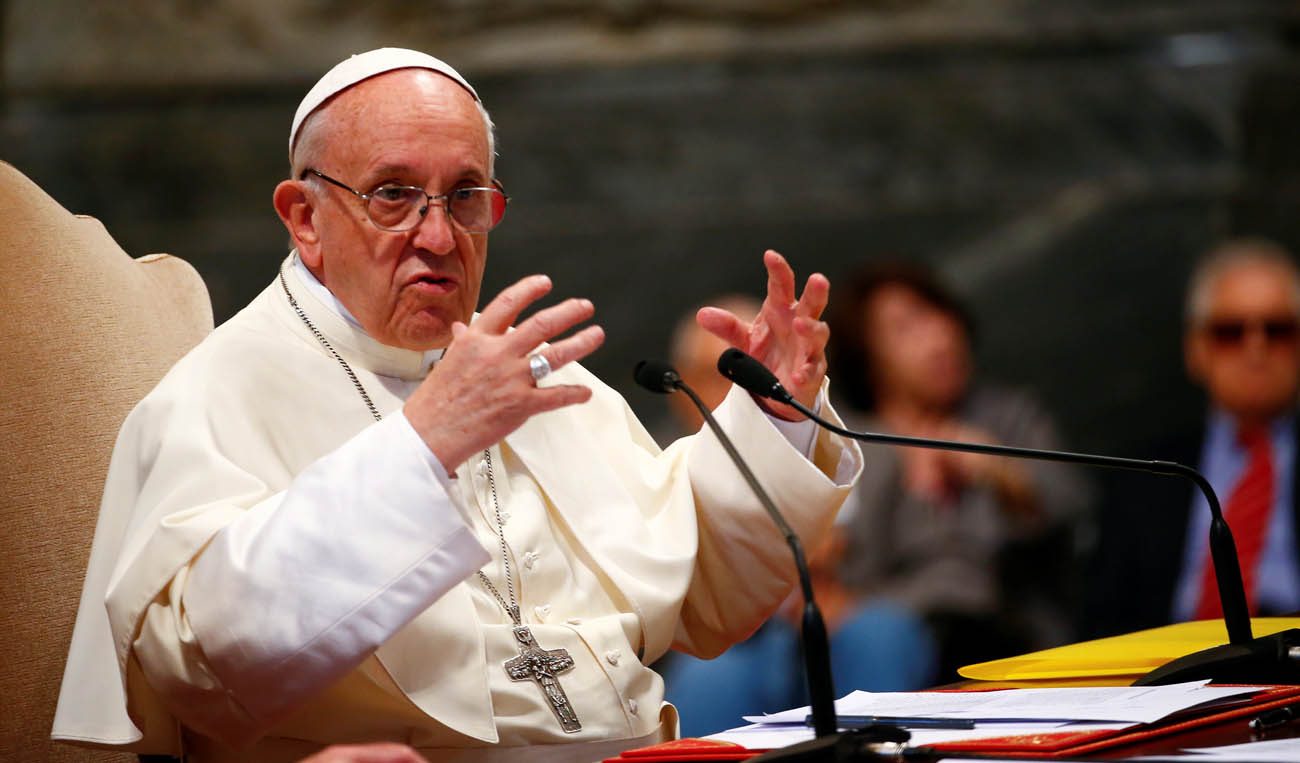 Pope Francis speaks during a meeting with leaders from the Diocese of Rome at St. John Lateran Basilica May 14. (CNS photo/Tony Gentile, Reuters)

ROME (CNS) — While taking selfies can be an occasion to capture treasured memories, it can also be a sign that young men and women are deprived of meaningful human interaction with others, Pope Francis said.

Responding to questions May 14 at a meeting with 1,700 priests and lay leaders of the Diocese of Rome gathered at the Basilica of St. John Lateran, the pope said he realized the negative social implications of technology a few days earlier when he was greeting teens participating in a program of the international network of “Scholas Occurrentes.”

“They were all there waiting for me,” he said. “When I arrived, they made noise, as young people do. I went to greet them and only a few gave their hand. The majority were with their cellphones (saying), ‘photo, photo, photo. Selfie!'”

“I saw that this is their reality, that is the real world, not human contact. And this is serious. They are ‘virtualized’ youths,” the pope said. “The world of virtual communication is a good thing, but when it becomes alienating, it makes you forget to shake hands.”

Archbishop Angelo De Donatis, vicar of the Diocese of Rome, had asked Pope Francis about his impressions of the meeting in March in preparation for the upcoming Synod of Bishops on “young people, faith and vocational discernment” and how the church should respond to the needs of young men and women.

The pope said he had “a good impression” of the presynod meeting and the meeting’s final document was “beautiful.” He also praised the commitment of the young delegates and their seriousness in addressing the challenges facing young people today.

Drug use, he said, is one of the main problems facing young men and women today. However, youths also can be “easy prey” to a different kind of drug: cultural alienation.

Young people today receive proposals that are alienating them “from values, from insertion into society, alienating them from reality: they propose a life of fantasy,” the pope said.

“It worries me that they communicate and live in a virtual world. They live like this, communicate like this and do not have their feet on the ground,” he said. “We must make young people ‘grounded’ in the real world; to touch reality without destroying the good things the virtual world may have because they are useful. This is important: reality, concreteness.”

An important way to help young people engage with the reality around them is to encourage them to get involved in charity work and in the corporal works of mercy, he said. “Do something for others, because this helps them be concrete, it grounds them, and they enter into a social relationship.”

Since many parents today “are from a generation whose roots are not very strong,” the pope said young people lost in the virtual world should engage in dialogue with their grandparents and the elderly.

Citing an unnamed poet, Pope Francis said, “‘All that the tree has flowered comes from what it has in the ground below.’ Go to the roots!”

NEXT: Pope hears of ‘spiritual illnesses’ in parishes of his diocese