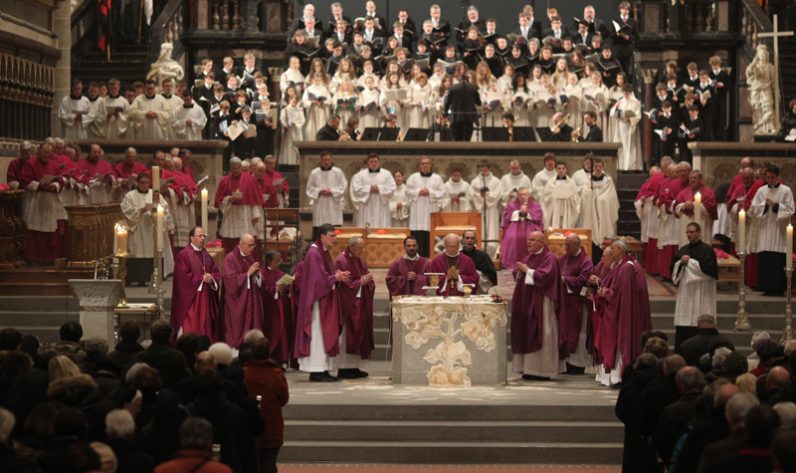 German bishops celebrate Mass in Cathedral of Trier, Germany, in this 2013 file photo. Pope Francis asked the bishops of Germany May 3 to continue working together to find broader consensus on guidelines for allowing a Protestant married to a Catholic to receive Communion. (CNS photo/Thomas Frey, EPA)

VATICAN CITY (CNS) — Pope Francis asked the bishops of Germany to continue working together to find broader consensus on guidelines for allowing a Protestant married to a Catholic to receive the Eucharist.

“Pope Francis appreciates the ecumenical commitment of the German bishops and asks them to find, in a spirit of ecclesial communion, a result as unanimously as possible,” the German bishops were told, according to a Vatican statement.

In February, the Vatican statement said, “more than three-quarters of the members” of the German bishops’ conference approved a “pastoral handbook titled, ‘Walking with Christ — In the Footsteps of Unity: Mixed Marriages and Common Participation in the Eucharist.'”

Pope Francis invited leaders of the bishops’ conference and some of the bishops opposed to the guidelines to come to the Vatican for a discussion with officials from the three offices.

“Various points of view were discussed; for example, how the question relates to the faith and to pastoral care, its relevance for the universal church and its juridical dimension,” the Vatican statement said, without providing further details.

Cardinal Rainer Maria Woelki of Cologne, one of the seven German bishops who objected to the conference guidelines, participated in the meeting at the Vatican May 3. In his letter to the Vatican, which prompted the meeting, he had asked whether the guidelines were not simply pastoral, but went to the heart of Catholic faith and practice, and whether the German guidelines could have a wider impact on the question of eucharistic hospitality in countries around the world.

The text of the German guidelines has not been made public, but it is widely assumed to foresee situations in which a Lutheran married to a Roman Catholic and regularly attending Mass with the Catholic spouse could receive the Eucharist and not only on special occasions like the baptism or first Communion of their child.

The council for Christian unity’s 1993 “Directory for the Application of Principles and Norms on Ecumenism” said, the Catholic Church “recognizes that in certain circumstances, by way of exception, and under certain conditions, access to these sacraments may be permitted, or even commended, for Christians of other churches and ecclesial communities.”

At the urging of the council, many bishops’ conferences around the world have published pastoral guidelines that list the occasions on which such eucharistic sharing would be acceptable.

Visiting a Lutheran parish in Rome in November 2015, a Lutheran woman married to a Catholic asked Pope Francis why she could not receive Communion when she went to Mass with her husband.

The pope responded that he could not issue a general rule on shared Communion, but the couple should pray, study and then act according to their consciences.

“Always refer to your baptism — one faith, one baptism, one Lord, as St. Paul tells us — and take the consequences from that,” the pope told the woman. “Speak with the Lord and move forward. I won’t say anything more.”

At the end of the evening, the Lutheran community gave Pope Francis an Advent wreath and Pope Francis gave the community a gold chalice, similar to the chalices he gives when visiting Catholic dioceses and parishes.