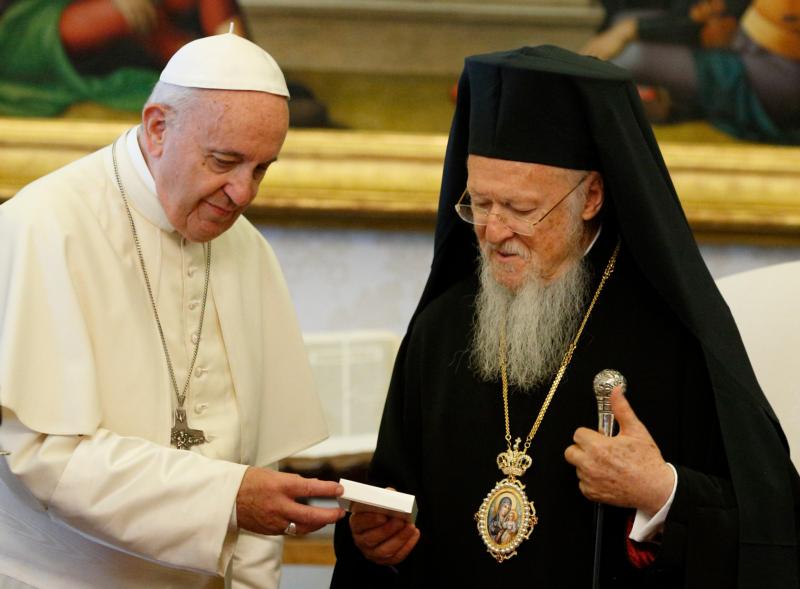 Pope Francis presents a gift to Ecumenical Patriarch Bartholomew of Constantinople during a meeting in the Apostolic Palace at the Vatican May 26. (CNS photo/Paul Haring)

VATICAN CITY (CNS) — Pope Francis and Ecumenical Patriarch Bartholomew of Constantinople called on Christians to work together to build a culture of solidarity in the face of growing economic inequality and a lack of respect for the human dignity of the poor and of migrants.

The two leaders met privately May 26 before addressing an international conference sponsored by the Centesimus Annus Pro Pontifice Foundation, which seeks to promote the teaching of St. John Paul II’s 1991 encyclical on social and economic justice.

“The current difficulties and crises within the global economic system have an undeniable ethical dimension,” Pope Francis told some 500 business leaders, theologians and proponents of Catholic social teaching.

The crises clearly “are related to a mentality of egoism and exclusion that has effectively created a culture of waste blind to the human dignity of the most vulnerable,” the pope said.

A “growing ‘globalization of indifference'” is seen in the uneven pace of development, “not only in materially poorer countries but increasingly amid the opulence of the developed world,” he said. It also is obvious in people’s reactions to migrants and refugees.

In his speech to the gathering, Patriarch Bartholomew insisted that Christianity is “essentially social. Faith is not limited only to the ‘soul’ without any interest for the social dimension, but rather, it also plays a pivotal role at the level of society.”

The Orthodox and Catholic churches, he said, promote spiritual values and charitable activity, but they also teach “the principles of the respect of the person, solidarity, subsidiarity and the common good.”

But, he said, the world today — as seen in the global economic system and the continued destruction of the environment — is experiencing a “crisis of solidarity” that threatens humanity’s very existence.

Patriarch Bartholomew condemned what he described as the “‘fundamentalism of the market,’ the deification of profit, the association of dignity with property, the reduction of the human being to ‘homo oeconomicus’ and the subordination of the human person to the tyranny of needs.”

In addition, he said, “we worship technology and its highest symbol — the computer — as our god,” thinking that it will solve all of people’s problems. But the world’s deepest problems cannot be fixed with technology alone, he said, citing “social injustice, divorces, violence, crimes, loneliness, fanaticism and the clash of civilizations.”

“Never before have we possessed so much scientific knowledge and acted so violently and destructively against nature and our fellow human beings,” Patriarch Bartholomew said.

For Christians, he said, two things are clear: the “crisis of solidarity” cannot be ignored because the problems directly impact human dignity; and, “nobody can face these problems alone.”

“The contribution of our churches remains crucial,” he said, because “they have preserved high values, precious spiritual and moral heritage and deep anthropological knowledge.”

“For Pope Francis and us, the identity and value of a culture or a society cannot be judged by the level of its economic growth, its technological development or its organization,” he said. “A civilization is judged by whether or not its final point of reference is the human person, in relation to his true divine destiny and the protection of his world.”

PREVIOUS: Voters in Ireland pave way for abortion on demand