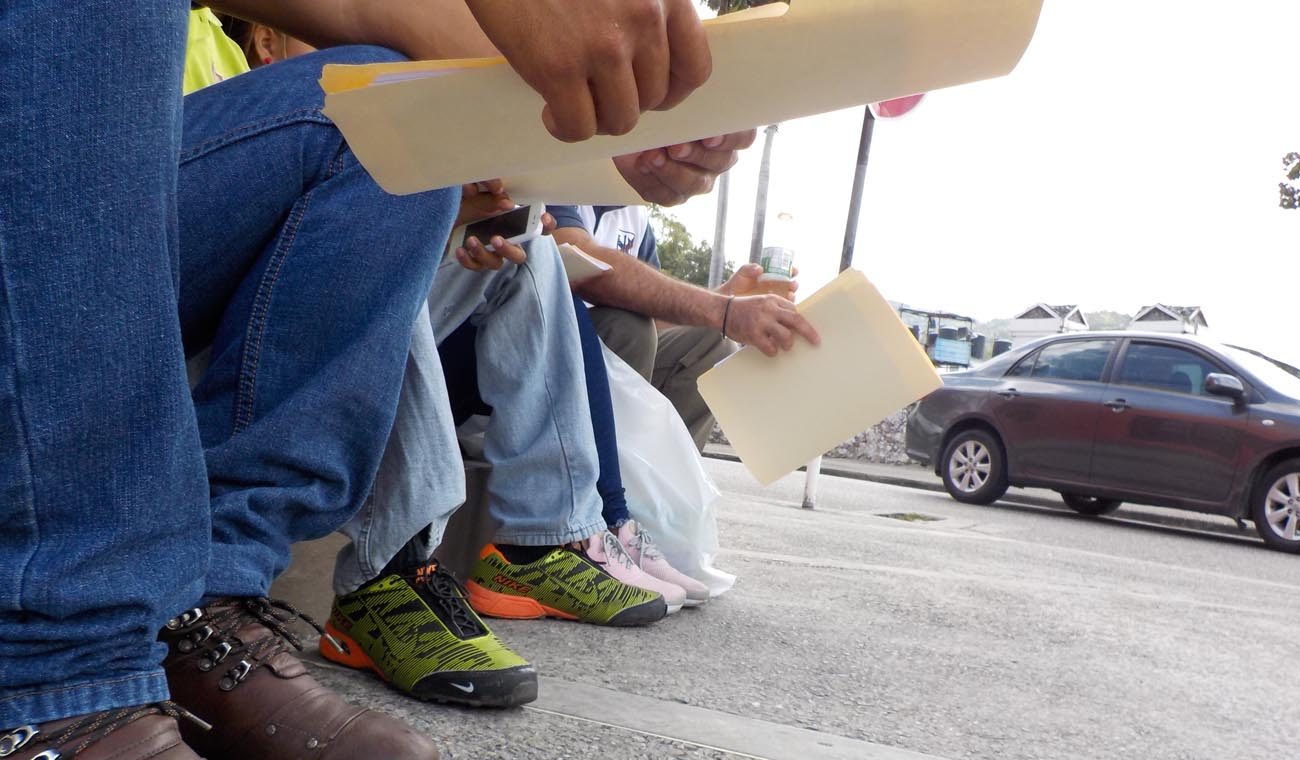 Asylum-seekers wait outside Living Water Community April 24 in Port of Spain, Trinidad and Tobago. About 30 years ago, Living Water Community, a lay Catholic group that serves the poor, began looking after asylum seekers and refugees until their cases were resolved. (CNS photo/Laura Ann Phillips)

PORT-OF-SPAIN, Trinidad (CNS) — With growing numbers of refugees in the twin island nation of Trinidad and Tobago, a Catholic group is expanding its efforts to meet the needs.

The United States is offering fewer than its usual number of resettlement places, so hundreds of undocumented migrants may find themselves stuck in the southern Caribbean country.

In earlier years, most would have been young men seeking asylum, “with some single women, very few children, and the occasional family,” Scott said, noting that, “Now we see a lot more families, couples, and unaccompanied minors.”

About 30 years ago, Living Water Community, a lay Catholic community that serves the poor, began looking after asylum seekers and refugees until their cases were resolved.

There were about 20 people from Russia, Iraq and countries in Africa, Scott said.

Back then, caring for refugees was simpler, she said, noting that trusted sponsors could “adopt” a family “by checking up on their needs, trying to assist with food items, or taking the family on outings, providing transport for school, helping them to integrate in the society.”

But, that is “virtually impossible now, with the increasing numbers,” she said. Cubans, Syrians, Venezuelans, Bangladeshis, Sri Lankans and Jamaicans are among those being helped by the Living Water Community’s migrants and refugees ministry.

The ministry, an implementing partner of the United Nations High Commission for Refugees, has 28 trained staff members.

“People come to us in need of help … and we help them freely,” said Living Water Community director Rhonda Maingot, in an April 26 Facebook video post. “We have been working with the authorities over the years to help them in the proper way, to have the right procedures done.”

“The poorest of the poor these days, many times, are asylum seekers and refugees, and so our hearts are open to them,” Maingot said.

The migrants and refugees ministry works with other ministries within the Living Water Community, particularly to source food and other supplies.

“We have a food bank ministry,” Maingot said. “We feed thousands of people every month … that ministry has grown over the years in a tremendous way, because the more the country gets into a slide, the more poor people come to us.”

Scott said that, with “over 300 minors in our care,” enrolling refugee children in the local school system has been a challenge.

With the fast-growing numbers, “we had no choice but to open our own school,” she said.

NEXT: World’s best high jumper has low-profile meeting with pope