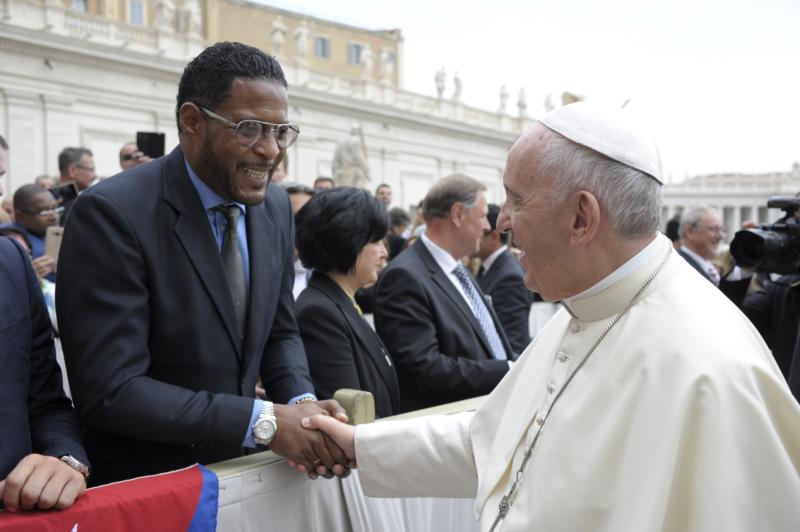 Pope Francis greets retired Cuban athlete Javier Sotomayor, who holds the world record in the high jump, during his general audience in St. Peter’s Square at the Vatican May 2. (CNS photo/Vatican Media)

VATICAN CITY (CNS) — Despite holding the world record in the high jump, Javier Sotomayor kept his feet on the ground and didn’t try to clear the waist-high wooden barricade between him and Pope Francis.

The now-retired 50-year old Cuban track-and-fielder was part of a small athletic delegation from Cuba greeting the pope at the end of his May 2 general audience in St. Peter’s Square.

The delegation included Luis Enrique Zayas, gold medalist at the World Under-20 Championships in the high jump in 2016, and coach Barbaro Diaz Castro.

Sotomayor is the only person to ever have cleared 8 feet in the high jump with his world record jump of 8 feet 1/2 inch (2.45 meters) set in 1993. Considered the best high jumper of all time, he has set many records and won numerous records throughout his nearly 20-year career. He took the gold medal in the 1992 Olympics and silver in 2000 before retiring the next year. Cuba boycotted the 1984 and 1988 Summer Olympic Games.

The delegation from Cuba was visiting the Vatican’s Pontifical Council for Culture for a meeting that also included Fabrizio Donato, captain of Italy’s national track team, and Msgr. Melchor Sanchez de Toca, undersecretary of the culture council and member of the Vatican’s own amateur co-ed track club, “Athletica Vaticana.”

NEXT: Survivors hope pope will act against ‘epidemic’ of abuse in the church