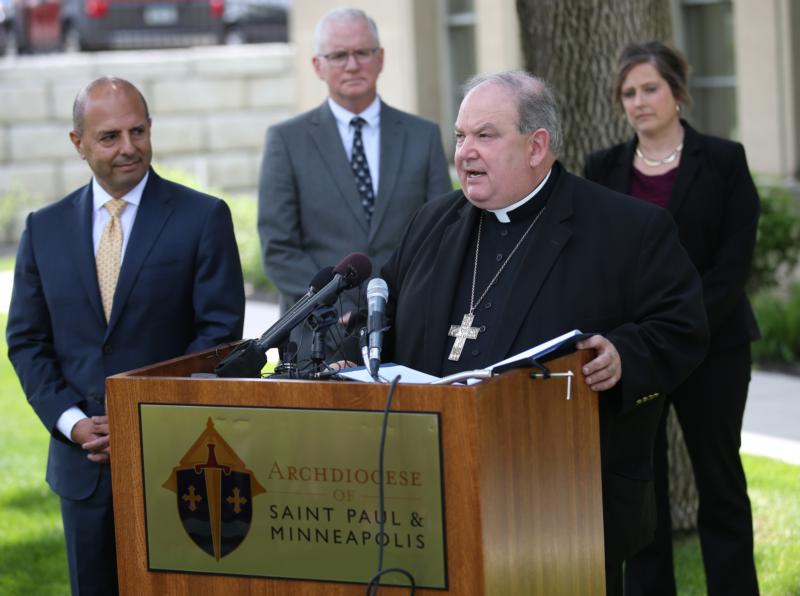 Archbishop Bernard A. Hebda of St. Paul and Minneapolis speaks during a May 31 news conference in St. Paul announce the archdiocese has reached a joint reorganization plan with a committee representing survivors of clergy sex abuse. From left is Tom Abood, chair of the Archdiocesan Financial Council and head of the archdiocese’s Reorganization Task Force; Tim O’Malley, director of the archdiocese’s Office of Ministerial Standards and Safe Environment; and Janell Rasmussen, deputy director of Ministerial Standards and Safe Environment. (CNS photo/Dave Hrbacek, The Catholic Spirit)

ST. PAUL, Minn. (CNS) — The Archdiocese of St. Paul and Minneapolis has reached a consensual plan with a committee representing clergy sexual abuse survivors to resolve its bankruptcy, offering $210 million for restitution to claimants.

The settlement is the largest ever reached in a bankruptcy case related to clergy sex abuse.

“By means of this consensual plan, the archdiocese and its parishes bring definitive resolution to this matter in a way that avoids further litigation and expense, and that allows the local church to carry on with its mission of spreading and living the Gospel Jesus Christ,” said Archbishop Bernard A. Hebda during an afternoon news conference announcing the agreement May 31 at the archdiocese’s central offices in St. Paul.

Archbishop Hebda expressed gratitude for the survivors who have come forward.

“Without their courage and persistence, today could not be possible,” he said. “I’ve been humbled by their willingness to share their stories with me. To those of you who have done so, I thank you for that gift.

“I recognize that the abuse stole so much from you — your childhood, your innocence, your safety, your ability to trust, and in many cases, your faith. Relationships with family and friends, relationships in your parishes and communities were harmed. Lives were forever changed. The church let you down, and I’m very sorry.”

At an earlier news conference May 31, St. Paul attorney Jeff Anderson, who represented most of the abuse survivors, also announced the settlement, calling it “a story of trauma to triumph.”

“This is some affirmation, as well as accountability,” he said of the plan while standing with several sexual abuse survivors, their advocates and other attorneys, many of whom wiped away tears throughout the press conference. “This all represents hope, help, healing, and … courage in the pursuit of truth.”

Speaking at Anderson’s news conference, Jamie Heutmaker, a survivor who is part of the Unsecured Creditors Committee, which represents survivors in the bankruptcy process, expressed his gratitude for people who have supported him in the nearly five decades since he was abused.

“Today is a great day for us and all survivors,” he said. “There’s still work to be done, but we’ve obviously done some really good work here, which I’m really proud of.”

Pending court approval, the plan’s $210,290,724 settlement, minus administrative expenses including unpaid attorneys’ fees, will be administered for survivor restitution through an independent trustee. As part of the plan, parishes will receive a channeling injunction which ends all litigation against them arising from this matter.

The funds will be available for distribution upon its approval by Judge Robert Kressel, who is overseeing the archdiocese’s bankruptcy proceedings.

Archdiocesan leaders hope the bankruptcy can be completely resolved within a matter of months.

The consensual plan was the result of years of mediation between the archdiocese, insurers, parishes and representatives of survivors.

The archdiocese filed for bankruptcy under Chapter 11 of the U.S. Bankruptcy Code in January 2015 amid mounting claims of clergy sexual abuse going back decades against priests and others associated with the church in the archdiocese.

In May 2016, the archdiocese filed a plan of reorganization, initially offering $65 million for abuse survivor remuneration. Over the following months, that amount increased to $156 million, primarily through additional insurance company settlements.

As part of its bankruptcy, the archdiocese sold its three chancery buildings on Cathedral Hill in St. Paul, as well as a fourth property it owned near Northfield. It later moved its offices to St. Paul’s Dayton’s Bluff neighborhood to rental property.

In August 2016, the Unsecured Creditors’ Committee filed a separate plan for the archdiocese’s reorganization, asserting that the assets of 187 parishes in the archdiocese’s boundaries, three Catholic high schools and the Catholic Community Foundation of Minnesota should be merged with the archdiocese’s assets in a plan for reorganization. Kressel later ruled that the other organizations’ assets did not legally require consolidation. The UCC appealed the ruling twice, but it was upheld by the U.S. District Court in December 2016 and the 8th U.S. Circuit Court of Appeals in April 2018.

In December 2017, Kressel denied both plans and ordered the archdiocese and UCC to return to mediation with the goal of reaching a consensual plan.

In a memorandum explaining his decision, Kressel expressed concern about the eight abuse claimants who had died between then and when the archdiocese entered bankruptcy in January 2015, and about others who might die as the reorganization process “drags on.”

The archdiocese, insurance carriers, parish representatives and UCC returned to mediation, ultimately arriving at the consensual plan May 30.