At U.S. Open, priest has chance to minister and enjoy his favorite sport 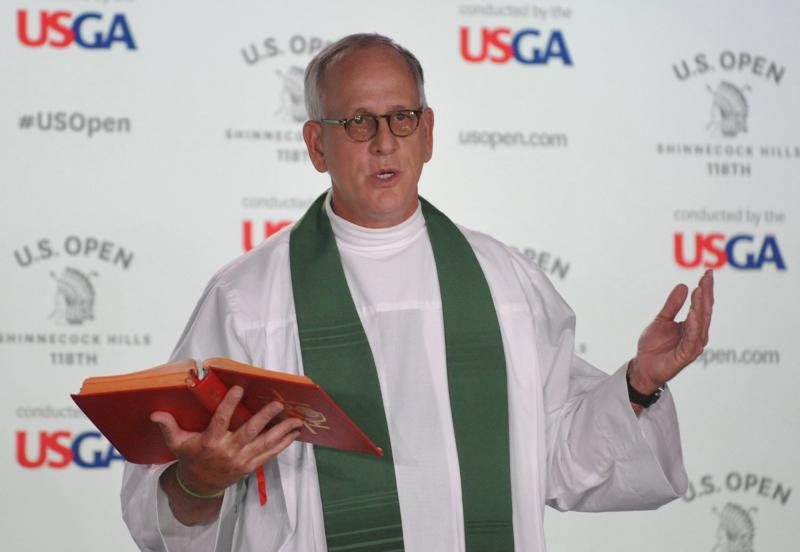 Father Tom Guido, pastor of Resurrection Parish in Miramar Beach, Fla., celebrates Mass June 17 in the U.S. Open media tent at the Shinnecock Hills Golf Club in Southampton, N.Y. Father Guido, who has attended 23 U.S. Opens, traditionally celebrates Sunday morning Mass on the final day of the tournament for journalists who are reporting on the event. (CNS photo/courtesy James Escher)

The tournament each June provides the Florida priest with an opportunity to perform his ministry and enjoy his favorite sport at the same venue.

Father Guido, 58, pastor at Resurrection Parish in Miramar Beach, attended his 23rd U.S. Open this year. He has missed only two tournaments since he first began attending the event in 1994.

A golf enthusiast who enjoys watching the action up close on the course, Father Guido said the focal point of his annual golf pilgrimage is to celebrate Mass for journalists, event staff and volunteers who are working in or near the media tent on the Sunday morning of the tournament’s fourth and final round.

The highlight of the trip, he said, is “to proclaim the word of God and to bring the Eucharist to people who otherwise can’t get to church.”

“My vocation and avocation cross paths,” said Father Guido, who was ordained in 1987. “It’s pretty cool. … It’s a unique combination.”

Father Guido compared his service at the U.S. Open to those of priests who celebrate Mass for traveling circus workers.

“They are people of faith who want to go to Mass, and it’s difficult for them to do that,” he told Catholic News Service.

“For people who work the tournament, Sunday’s the busiest day for them. It’s difficult for them to get out to a local parish or a local church. For me, it’s an opportunity to bring church to them.”

Father Guido attended his first U.S. Open at the Oakmont Country Club in Oakmont, Pennsylvania, in 1994, after receiving an invitation to attend the tournament from a U.S. Golf Association employee he had gotten to know while serving as a campus minister at Florida State University in Tallahassee.

Father Guido was subsequently invited to celebrate Mass at the tournament. “It kind of parlayed from there,” he said.

The first U.S. Open service Father Guido celebrated was for a gathering of about six people in a hotel room. The following year, at Shinnecock Hills, the Mass was moved to the media tent, drawing a larger congregation. Attendance each year averages between 25 and 50 worshippers, Father Guido said.

The liturgy has coincided with Father’s Day, when the final round of the U.S. Open is played.

“We always get very nice comments from the attendees of the Mass,” said Pete Kowalski, the USGA’s communications director. “It’s been a fun tradition to start Father’s Day at the U.S. Open with Father Tom. … We love having him attend every year.”

The two U.S. Opens Father Guido has missed since 1994 were in back-to-back years. In 2001, he was asked to officiate a wedding in Ireland and in 2002 he joined his family on a cruise to Alaska to celebrate his parents’ 60th wedding anniversary.

Family and golf played an integral role in his discernment to become a priest, Father Guido said.

During his youth in Hollywood, Florida, his father’s first cousin, Father William Hines of the Diocese of Scranton, Pennsylvania, would travel with fellow priests to the Sunshine State in the winter to escape the cold and to play golf, Father Guido recalled.

“As a middle school and high school kid, I used to play golf with them and got to know them as people,” he said. “That helped plant the seed for my vocation.

“My vocation and avocation came together early.”

Raised in a “golfing family,” Father Guido began playing the game at age 6. He and three older siblings learned the fundamentals of the sport on municipal courses. Julius Boros, the 1952 and 1963 U.S. Open champion, was a longtime buddy of Father Guido’s father, Bob, and a close family friend.

Father Guido has many memories of the U.S. Opens he’s attended. Among his fondest, getting a glimpse of an up-and-coming star at Shinnecock Hills in 1995.

“I remember being at the first tee box,” said Father Guido. “There was a young man there by the name of Tiger Woods. He was the U.S. Amateur champ. … I remember seeing Tiger hit his first shot at his first U.S. Open.”

Father Guido, who plays golf once a week and has a 12 handicap, remains enthusiastic about his yearly trips to the tournament, which allows him to maintain relationships with members of the media and event staffers he’s met along the way.

“There are people who attend the (U.S. Open) Mass that I’ve seen for a long time,” he said. “I’ve become friends with a lot of them … It’s been fun. I’ve enjoyed it. It’s something I still look forward to each year.”