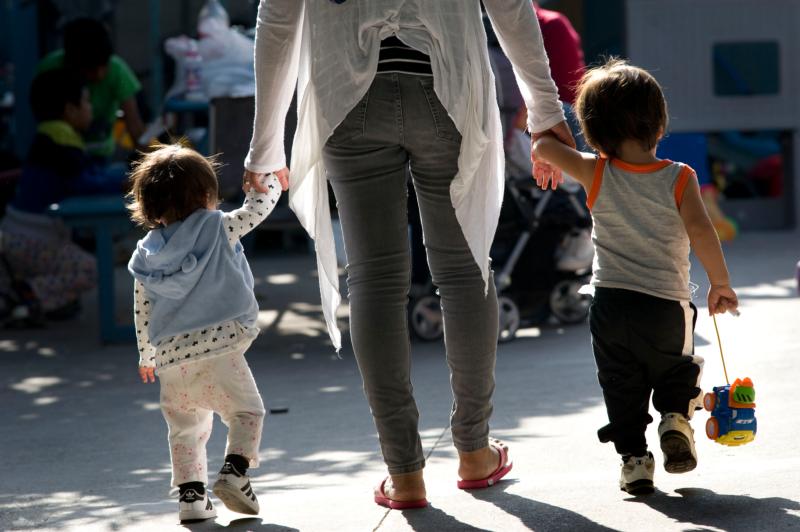 A woman walks with children at a shelter for migrant women and children in Tijuana, Mexico, June 20. The shelter is run by the sisters of the Missionaries of St. Charles Borromeo and has about 80 people who intend to seek asylum in the United States. (CNS photo/David Maung, EPA)

CHICAGO (CNS) — Catholic Extension announced June 21 it has established a Family Reunification Fund as “a response to the human tragedy unfolding on the nation’s southern border” with Mexico.

Family separations at the border and policy debates over that policy and the nation’s immigration system “have exposed the profound misery of those fleeing their countries and coming to the United States,” said the Chicago-based organization, which is the leading supporter of missionary work in poor and remote parts of the United States.

Extension said the fund will support ministries that provide direct outreach and advocacy for immigrant families who are “separated as a consequence of our broken immigration system.

“The fund,” it said, “will mainly benefit existing ministries on the southern U.S. border with Mexico, specifically those that are actively sheltering, defending, and caring for immigrants and their families.”

Through the Family Reunification Fund, Catholic Extension said it can increase its support to resource-strapped immigrant ministries “at this very critical moment when policy changes are creating even more hardship and uncertainty among immigrant families.”

Recipients included the Kino Border Initiative in Nogales, Arizona, which provides research and advocacy, as well as direct humanitarian assistance to migrants on both sides of the U.S.-Mexico border. Funds also went to support shelters in the Rio Grande Valley of Texas that coordinate with Immigration and Customs Enforcement officials to provide a safe place for paroled immigrants and their families.

Whether needs arise from a natural disaster or a man-made crisis, said Father Jack Wall, president of Catholic Extension, “it is our duty as Catholics to be present on the margins to care for the suffering and defend the vulnerable. We are not powerless in this struggle, and so we ask people to join us in providing direct help to immigrant families who are part of the one family of God.”

NEXT: Nuns’ killer gets life sentences for plea, forgiveness from their families