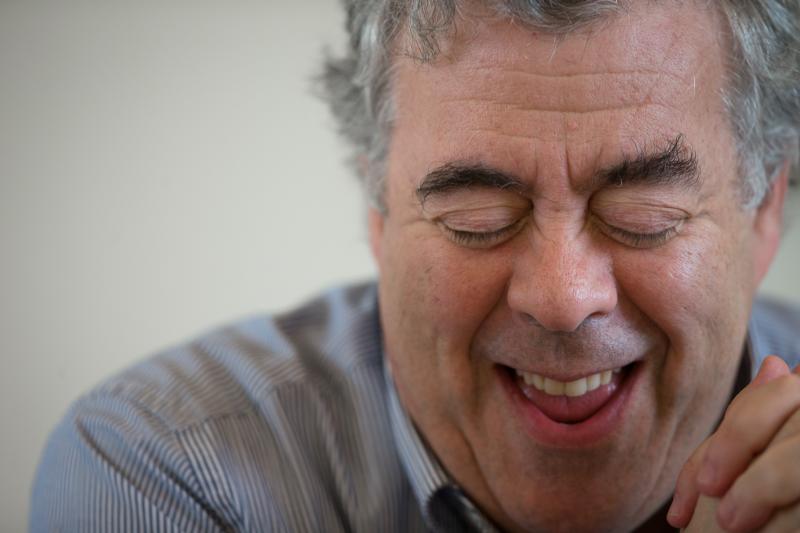 Stephen M. Barr, professor of physics and astronomy at the University of Delaware, and president of the Society of Catholic Scientists, is seen at the Thomistic Institute in Washington June 7. (CNS photo/Tyler Orsburn)

WASHINGTON (CNS) — There are few places University of Delaware physicist Stephen Barr would rather be than in a roomful of 100 or so of his science colleagues discussing quantum mechanics without having to confront the oft-perceived divide between science and religion.

Barr, president of the fast-growing Society of Catholic Scientists, was in his element June 9 during the society’s 2018 conference at The Catholic University of America in Washington.

He delivered his talk on observing the behavior of atoms and subatomic particles to an audience of like-minded Catholic scientists from various disciplines who appreciate that their research is helping unravel the Creation’s mysteries.

Barr, 64, has long wanted to see such an opportunity for Catholic scientists to come together to discuss their scientific expertise, network and share their faith.

The conference was the society’s second, the first taking place in Chicago in 2017. More than 100 professional and student scientists gathered to explore “The Human Mind and Physicalism” with nearly a dozen presenters incorporating scientific findings in physics, ecology, free will and the human mind with philosophical perspectives during a weekend of reflection and discovery.

Barr told Catholic News Service he had long suspected there was interest among Catholic scientists for a forum such as the society. It wasn’t until 2016 when the society was founded that he and others learned that the interest is deeper than they could have imagined.

“There are many religious scientists,” Barr said. “The militant atheists you read about are a tiny minority.”

As they have formed the organization, Barr and the society’s board learned that scientists have been so receptive to recruitment pitches for joining because they felt they often were maneuvering in professions where religion and faith values are not always appreciated.

Since the Chicago conference society membership has grown from 330 to 750, Barr said. Members are on six continents — Barr noted there are no members from Antarctica — with about 80 percent in North America.

Conference attendees welcomed the opportunity to mix among Catholics like themselves and to discuss their work in light of their faith.

Karin Oberg, 35, associate professor of astronomy at the Harvard-Smithsonian Center for Astrophysics in Cambridge, Massachusetts, said she welcomed the chance to join the society’s board of directors because she wanted to support other scientists as well as her students and did not want to leave her faith values outside of the laboratory.

“My biggest motivation is for the students so they don’t think they have to choose to live their scientific vocation separate from their faith,” said Oberg, who grew up Lutheran in Sweden and became Catholic in 2012.

Oberg said she rediscovered her Christian faith while in the United States and determined there was no conflict between the religious values she cherishes and her research into how chemistry and physics interact during star and planet formation.

Oberg, like many of the conference attendees who work in nonreligious settings, said they have not experienced outright hostility about their faith, but that they do face occasional questions or comments from colleagues about whether their beliefs conflict with the science they practice.

Barr acknowledged that a small vocal minority of critics push scientists with deeply held religious values to reconcile their work with their faith.

“The words sort of grate me because I don’t experience anything to be reconciled. It’s not like there’s a problem and I found the solution to this problem,” he said.

“I’m a scientist and a Catholic for many of the same reasons, a sense of wonder about the world, a sense that everything makes sense at some deep level and that all things hold together in some coherent way. Both are part of what makes me a Catholic and believe in God and to do science. So what’s to reckon?”

Steve Mrenna, who has researched particle physics for 16 years at the U.S. Department of Energy’s Fermilab in Batavia, Illinois, agreed. He expressed concerned, however, for what he sees as a “rampant” acceptance of scientism — that science alone can render truth about the world and reality.

“When you come down to it, there’s nothing about faith that defers any scientific fact that contradicts belief in God,” Mrenna told CNS.

Overall, the scientist participants said that when confronted, even mildly, they respond by explaining that their work of discovery reinforces their faith as they better understand the natural world.

John Killackey, a member of St. Francis of Assisi Parish in Missassauga, Ontario, and a consultant in regulatory science who often works with the U.S. Food and Drug Administration on behalf of several Canadian firms, said he hopes an organization such as the society can help the scientific community understand the value of holding on to values of faith in its work.

He is concerned that without adhering to moral values, scientific research will veer too far into unethical research that will harm human dignity.

“People are just not listening to ethical concerns. It’s just about going ahead,” he said of such research.

Margaret Schneider, who teaches biology and human anatomy at Suffolk County Community College in New York, said that seeing how a cell functions helps reinforce her faith because of the complexity of the thousands of chemical reactions occurring at once.

“We’re discovering these things, but God already has a plan,” she said.

Vanessa Chan, a doctoral student at the University of Toronto studying cognitive neuroscience, told CNS she sees no conflict between her faith and science.

“Part of why the sciences are so interesting is precisely because of the knowledge that we are created by God in his image. So when we’re talking about studying psychology or neuroscience they are the mechanism by which we understand the world, almost like we’re interacting with God’s creation. It demonstrates the awe of creation,” she said.

Membership in the Society of Catholic Scientists is limited to those who hold a doctorate and are practicing Catholics. Students in graduate and doctoral studies also can belong. Some scholar associates who have a particular expertise in fields such as theology, philosophy and ecology have been invited to participate as well.

Barr said the society planned to recruit members from other continents in the hope that the society becomes truly international in scope and that similar conferences can be convened worldwide.

NEXT: New York court again rules archbishop’s remains may be moved to Peoria