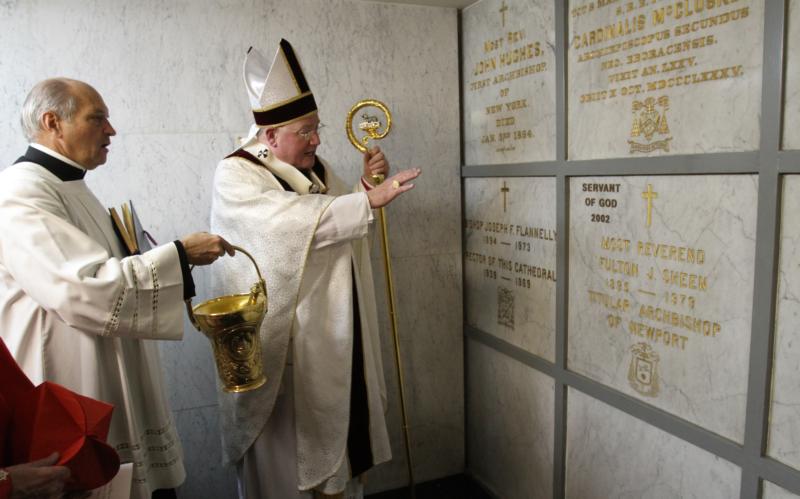 Then-Archbishop Timothy M. Dolan of New York blesses the tomb of Archbishop Fulton J. Sheen in the crypt of St. Patrick’s Cathedral in New York City on Dec. 9, 2009, the 30th anniversary of the prelate’s death. On June 8, the New York Superior Court ruled in favor of Joan Sheen Cunningham, a niece of Archbishop Sheen, saying his remains should be returned to the Diocese of Peoria, Ill., his home diocese. (CNS photo/Gregory A. Shemitz)

PEORIA, Ill. (CNS) — The Diocese of Peoria has reacted with “great joy” to a decision by a New York court in favor of Joan Sheen Cunningham’s petition to have the remains of her uncle, Archbishop Fulton J. Sheen, moved from New York City to Peoria.

“It is the hope that this process will begin immediately,” said a diocesan news release, issued June 8 following the ruling by Manhattan Supreme Court Justice Arlene Bluth that again clears the way for the remains of the famed orator and media pioneer to be removed from St. Patrick’s Cathedral in New York and transferred to St. Mary’s Cathedral in Peoria, the archbishop’s home diocese.

Peoria Bishop Daniel R. Jenky said he hoped the Archdiocese of New York — which appealed Bluth’s original ruling in favor of Cunningham in late 2016 — will now “cease its legal resistance.” He asked all to pray “for a renewed spirit of cooperation” to move Archbishop Sheen’s sainthood cause forward.

Officials in the Archdiocese of New York said June 11 they “will review this decision carefully with our attorneys and determine what next steps might be taken.” The statement also said trustees of St. Patrick’s Cathedral “have an obligation to respect the wishes of Archbishop Sheen, as clearly stated in his will and earlier insisted upon by his niece, that he be buried in New York.”

But in 2016, Cunningham, who is Archbishop Sheen’s oldest living relative, filed a petition with the courts in New York asking that his body be moved to the Peoria cathedral. She said her uncle would not have objected to his remains being transferred to his home diocese from the crypt at St. Patrick’s Cathedral where he was entombed following his death in 1979 at age 84.

Returning the prelate’s remains to Peoria “will be the next step toward bringing ‘Venerable’ Archbishop Sheen’s beatification to completion including a beatification ceremony in Peoria, Illinois,” said the diocese’s news release.

The New York cathedral trustees’ statement said they hoped “his cause is reopened without any further delay, and pray that soon, if it be God’s will, we will be able to rejoice in his being declared a saint.”

“The process of beatification and canonization focuses only on where the soul of a person is, not on where an individual’s mortal remains might be,” it said. The Vatican Congregation for Saints’ Causes has said “the cause can progress without any transfer of the remains,” according to the statement.

Born May 8, 1895, in El Paso, Illinois, Fulton John Sheen was ordained a priest of the Diocese of Peoria at St. Mary’s Cathedral in 1919. A crypt has been prepared there for his reinterment.

After a brief period of priestly ministry in Peoria, the future archbishop went on to serve on the faculty of The Catholic University of America in Washington for nearly 30 years.

He was national director of the Propagation of the Faith from 1950 to 1966. A former auxiliary bishop of the New York Archdiocese, he served as bishop of Rochester, New York, from 1966 to 1969 and was given the personal title of archbishop when he retired from that diocesan post. He is the author of dozens of books, including his autobiography: “Treasure in Clay.”

In 2012, 10 years after his canonization cause was officially opened, Pope Benedict XVI announced that the Vatican Congregation for Saints’ Causes had recognized Archbishop Sheen’s life as one of “heroic virtue,” and proclaimed him “Venerable Servant of God Fulton J. Sheen.”

In September 2015, his cause was suspended indefinitely, when the Archdiocese of New York denied a request from Bishop Jenky, president of the Archbishop Sheen Foundation, to move the archbishop’s body to Peoria. In June 2016, Cunningham filed her petition on transferring his remains to the Illinois diocese.

NEXT: Public-private initiative helps over 9,000 people get free health care