Catholic singles encouraged to make gift of self at national conference 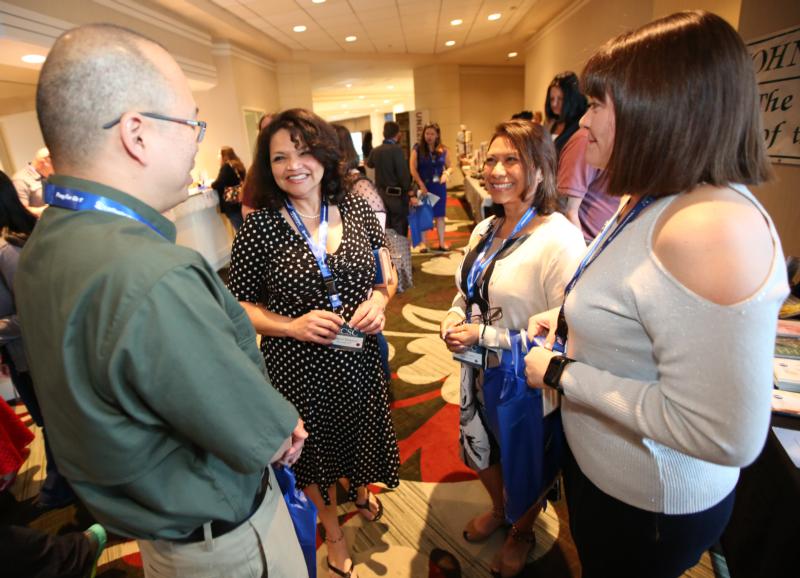 He told the story of a woman who had been promised a Toyota at her job. Byblow showed on a big screen what she really got — a toy Yoda.

“Because of her expectations, she was quite disappointed,” Byblow said.

Expectations like that can lead to seeking fulfillment in the wrong places, he added.

Byblow shared a testimony of his struggles in the single life, including viewing pornography and experiencing same-sex attraction and gender identity questions. But eventually, he found purpose in Jesus Christ. Byblow, 37 and single, said he now sees his identity in making a gift of himself by being a spiritual father, in a lay sense, to others.

“Pursuing the will of God, I realized, is not about what I want. It’s about what God desires of me and how I can best serve him at this present point in my life,” Byblow told an audience of 400 gathered in the ballroom of the Hilton Minneapolis/St. Paul Airport Mall of America hotel in Bloomington.

His address was part of the 18th National Catholic Singles Conference held June 8-9. The gathering provides an opportunity for singles to engage in the faith together through presentations, prayer, the sacraments and fellowship.

Byblow, who spoke June 9, and several other speakers delivered presentations on the call to holiness for Catholics who are single.

Archbishop Bernard A. Hebda and Auxiliary Bishop Andrew H. Cozzens of St. Paul and Minneapolis presided at Masses, and adoration and confession were available throughout the weekend. Social activities preceded and followed the conference.

“For me, it’s knowing that I’m going to be around just faith- and fun-filled people, and (I’m) going to come away inspired and edified,” said Theresa Grobecker, a parishioner of St. Joseph in Troy, New York, who has been to multiple Catholic singles conferences.

“It’s a balance of fun, but yet being able to find opportunities of prayer and reflection,” she told The Catholic Spirit, the St. Paul and Minneapolis archdiocesan newspaper.

Inspired by the theology of the body, a collection of papal audiences by St. John Paul II, the conference began in 2005 in Denver, and various sites throughout the U.S. have hosted it since. It was held in Minnesota for the first time this year.

“We need to know who we are as sons and daughters of God, and that’s really how we’re going to be able to live our singleness well,” Northrop said.

Jen Messing, the host site co-chair and a parishioner of St. Charles Borromeo in St. Anthony, Minnesota, said the conference is really about helping attendees become formed in the single life to make a gift of self in their current life stage.

“It’s kind of a unique reality of this day and age having a large population of people that are not in their (vowed) vocations and … there is not a set formula for how to work with single people,” said Messing, who runs a retreat ministry based on the theology of the body, Into the Deep.

“It became kind of an opportunity to evangelize and form singles because a lot of things in the church will often gear toward families or parenting or marriage or religious life,” she said.

Messing, who had attended multiple conferences before assuming her host role this year, said the appeal of potentially meeting another Catholic of the opposite sex offers initial appeal for attendees. However, she said it’s not a “meat market,” but rather a place for people to find deep, faith-filled friendships and grow in their faith.

Salvatore Vermiglio, 51, who has attended the conference nine times, said initially, he did expect to find his future wife across the room at the gathering.

“I’ve learned that you tamp down that expectation,” said Vermiglio, a parishioner of the Cathedral of Our Lady of the Angels in Los Angeles. “The expectation that you do have is that you’re going to meet friends, you’re in contact with other fellow Catholics, and if things happen, it happens.”

Once in a while, the connections lead to romantic relationships. Northrop said there have been 15 marriages between people who have met through the conference, which has drawn more than 4,000 Catholics in 13 years.

Byblow urged attendees to focus on how they can serve God now. Byblow said he realized focusing on spiritual fatherhood will prepare him to be a stronger physical father, too. He also said that women are likewise called to spiritual motherhood, and neither is “second place,” nor means marriage or another vowed vocation isn’t possible down the road, he said.

“Perhaps being where you are right now is not second place as long as holiness is your first pursuit,” Byblow said. “And just imagine how many more people might be touched by your love if you stepped into that role of spiritual fatherhood and motherhood a little more from right where we are right now, open to what God can author.”

Davis is a reporter at The Catholic Spirit, newspaper of the Archdiocese of St. Paul and Minneapolis.

PREVIOUS: Reflection, repentance from sin of racism seen as key to evangelization