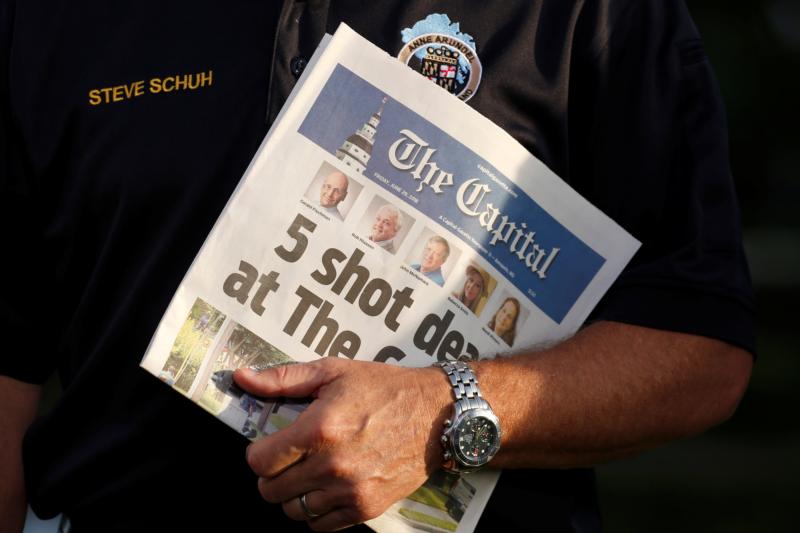 BALTIMORE (CNS) — While Catholics throughout the Archdiocese of Baltimore offered prayers and support for the families and loved ones of five people murdered June 28 at the offices of the Capital Gazette in Annapolis, a former longtime sports editor for the newspaper mourned his friends as exceptional journalists who also were good human beings.

A 38-year-old gunman using a shotgun blasted his way into the newsroom in what police said was a targeted attack against the publication.

Two others were injured in the attack.

Ramos, in custody and charged with five counts of first-degree murder, had a long-standing dispute with the newspaper after the Capital Gazette wrote about a criminal harassment case against him. He sued for defamation, with courts ruling in the newspaper’s favor.

Baltimore Archbishop William E. Lori said he was “shocked and saddened by the terrible shootings at the Capital Gazette.”

“We pray for the eternal rest of those who died,” he said. “We also pray for their families, friends and colleagues in journalism who mourn their loss.”

Gerry Jackson, the sports editor for the Capital Gazette for more than 20 years who now works for the Baltimore Sun, said he is deeply pained by the deaths of his colleagues. He was a friend of four of the victims and considered McNamara in particular to be as close as a brother.

McNamara, an author of two books about basketball at the University of Maryland, worked on the news desk of the Capital Gazette before leaving to work for the Prince George’s Journal, also in Maryland. Jackson hired him back to cover sports.

“We were a small staff,” Jackson said, “and we needed to work with good people who can get along with people really well. John grew up in a big, Catholic family like I did. We talked about how that taught you to get along with co-workers because you learn the give-and-take of putting up with different personalities.”

Jackson noted that McNamara was the eldest of seven and a graduate of St. John’s College High School in Washington. One of McNamara’s uncles was a Catholic priest, Jackson said.

Jackson did not know McNamara’s current parish in the Archdiocese of Baltimore, but noted that he and his wife were active in its pre-Cana program. Whenever difficult situations arose, Jackson said, everyone turned to McNamara for support.

“He was the rock of his family,” Jackson told the Catholic Review, the archdiocesan news outlet.

Jackson also spoke fondly of three other friends lost in the rampage.

Hiaasen was the kind of editor “who would go out of his way if you wrote a column to say how much he liked it,” Jackson said.

Winters, who frequently covered community news, was a generous person whom Jackson called the “godmother” of the newsroom.

He described Fischman as a shy, detail-oriented person whom others in the newsroom relied on frequently.

“He was the guy you went to in the office if you had a grammar question or questioned the usage of a word,” Jackson said. “He was better than a dictionary.”

Redemptorist Father John Tizio, pastor of St. Mary Church in Annapolis, said his parish community “holds and lifts up in prayer all the victims of this senseless act of violence in our city.”

He noted that the Capital Gazette is located not far from St. Mary’s mission church of St. John Neumann. He considers it a neighbor.

“Our hearts and minds are heavy with grief,” he said. “But in this grief we know our God will help us find healing, peace and strength in our faith and in one another.”

The pastor said the victims, the injured, their families, friends and loved ones would be remembered at all Masses the weekend of June 30-July 1.

Christopher Gunty, CEO of Catholic Review Media and a board member of the Maryland Delaware D.C. Press Association, echoed the words of the association’s president, Robin Quillon, who described the Capital Gazette as “a critical part of the community in Annapolis and in our association.”

“The staff of Catholic Review Media joins our prayers for the victims and their loved ones, as we witness again the impact of violence and guns on our community,” Gunty said. “Let us pray for an end to these kinds of incidents.”

Maryland Gov. Lawrence Hogan Jr. ordered flags to be flown at half-staff June 29 in honor of the victims.

“The Capital Gazette is my hometown paper, and I have the greatest respect for the fine journalists, and all the men and women, who work there,” the governor said on social media. “They serve each day to shine light on the world around us so that we might see with more clarity and greater understanding.”

Jackson and his wife, Nancy M. Jackson, a former reporter for the Capital Gazette and the Catholic Review, attended Mass at their parish church of St. Michael in Overlea the morning after the murders. They have been overwhelmed by expressions of support.

“Keep reaching out to one another and try to see the good in others,” Jackson said.

Matysek is digital editor for the Archdiocese of Baltimore. Emily Rosenthal, Catholic Review staff writer, contributed to this story.