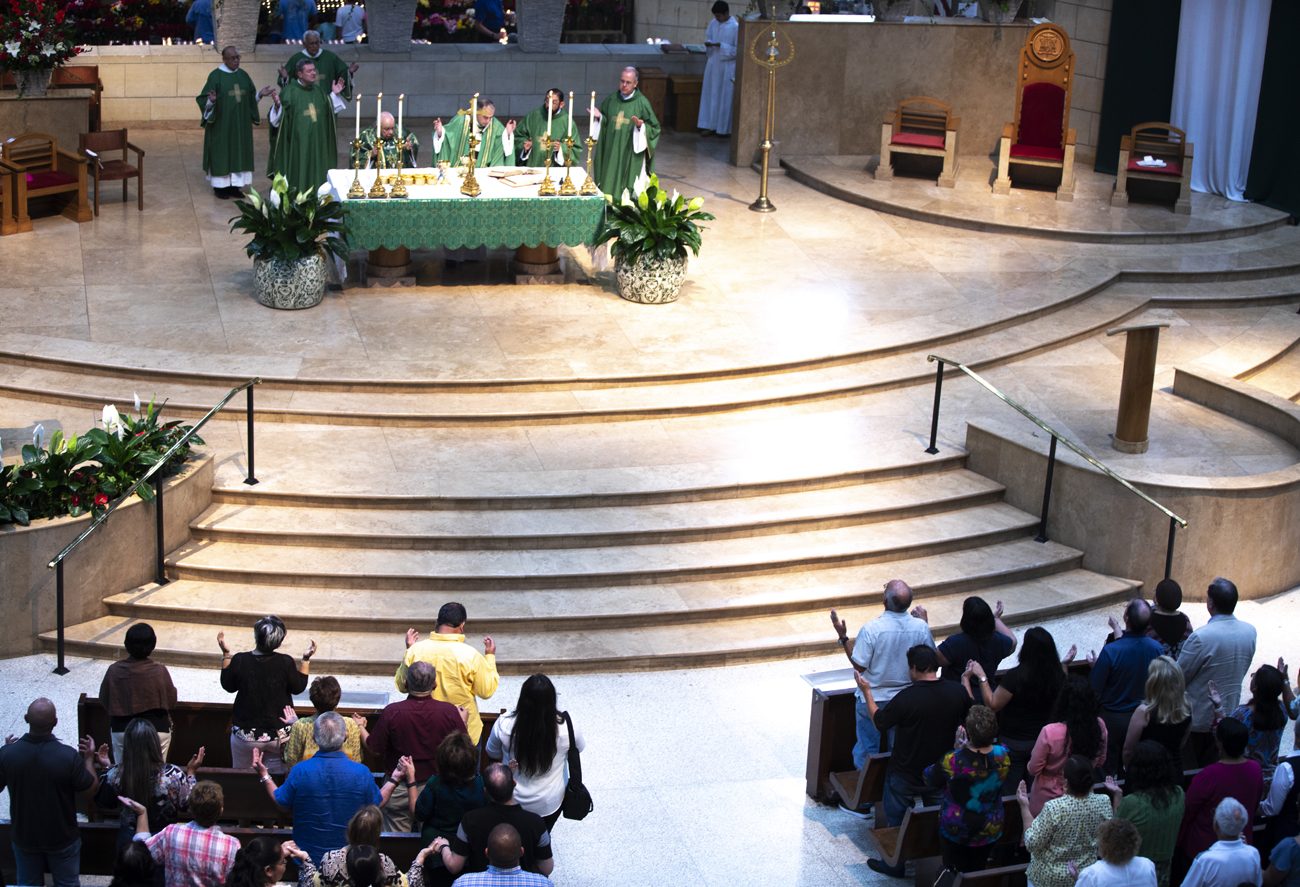 Cardinal Daniel N. DiNardo of Galveston-Houston and president of the U.S. Conference of Catholic Bishops, center, is joined by a delegation of U.S. bishops who concelebrated Mass July 1 at the Basilica of Our Lady of San Juan del Valle in San Juan, Texas. The bishops embarked on a fact-finding mission about Central American immigrant detention at the U.S.-Mexican border. (CNS photo/Chaz Muth)

MCALLEN, Texas (CNS) — The bishops of the Catholic Church in the United States have for weeks expressed outrage and condemned the government’s recent practice of separating children from a parent or a family member if they’re caught crossing the U.S.-Mexico border without legal documentation.

On July 1, led by the president of the U.S. Conference of Catholic Bishops, a delegation of prelates from around the country physically stepped into the ground zero of the immigration debate when they arrived in the Brownsville-McAllen area near the southern border to meet with those affected by the policy.

“This is a sign that the bishops of the United States are concerned about the situation and the circumstances affecting people, not just those who live in Brownsville but all along the border,” said the local bishop, Bishop Daniel E. Flores of Brownsville during a July 1 interview with Catholic News Service. “This is a moment to completely understand the reality of the situation, to meet, speak with people who are living this reality. It’s a message for the church.”

Bishop Flores welcomed the delegation led by the president of the USCCB, Cardinal Daniel N. DiNardo of Galveston-Houston, during a morning Mass at the Basilica of Our Lady of San Juan del Valle-National Shrine near McAllen.

Auxiliary Bishop Robert J. Brennan of Diocese of Rockville Centre, New York, and Bishop Joseph C. Bambera of Scranton, Pennsylvania, also were present during the Mass. Archbishop Jose H. Gomez of Los Angeles, who is vice president of the USCCB, is expected to join the delegation.

Referring to the Sunday Gospel readings from the Book of Mark, in which Jesus heals the daughter of the Biblical Jairus, Bishop Flores, who delivered the homily, said that what the bishops were doing near the border was similar. Jesus was attentive to the woman who touched him and wanted to be healed. Jesus was capable of stopping for a moment and listening to her and tending to her so he could heal her. The story provides the people of God an example of what God wants, he said.

“He is an example for us because of his capacity to tend to this person in his presence and allowing that woman to change his path,” Bishop Flores said. “What kind of people does the Lord want? He wants a people capable of looking at the reality in front of them and adapting to that reality. He didn’t say, ‘I don’t have time for you today.’ He didn’t say, ‘You’re not in the plan, you’re not in the calendar.'”

To be compassionate, one has to have his or her eyes open just as Jesus shows us in the Gospel, he said, and the bishops were visiting the border to listen and to see the reality in that area in a similar manner.

“The bishops are visiting here so they can stop and look and talk to people and understand, especially the suffering of many who are amongst us,” he said, switching between English and Spanish. “That’s what the Lord taught us: to listen and then respond to the plan, the Christian plan, and to give hope to the poorest and neediest, to tell them that the Christian people have not forgotten them.”

Christ’s example, he said, was to respect the dignity of each person, “each one, and to hear their cry to tend to them. That is the purpose of the church.”

“We as a church have to hear where the reality is, we have to be the ones to say, ‘There’s a human face and that human face always points us to Christ.’ If we don’t say it, who will?” Bishop Flores asked.

He said he was glad the bishops would be able to witness the generosity of the people of the Rio Grande Valley, who with few resources always respond generously to those who have needed them over the years.

“Let’s ask the Lord to allow us to see with open eyes to respond with compassionate hearts,” he said. “We can be a country of laws without being a nation that lacks compassion.”

The start of the two-day visit began a day after mass protests around the U.S. demanded a stop to the separation of families. The prelates’ visit will be focused on family separation and they plan to visit a center for migrants run by Catholic Charities and also to meet with authorities near the border.

NEXT: Another busy year ends for Supreme Court with all eyes on next term