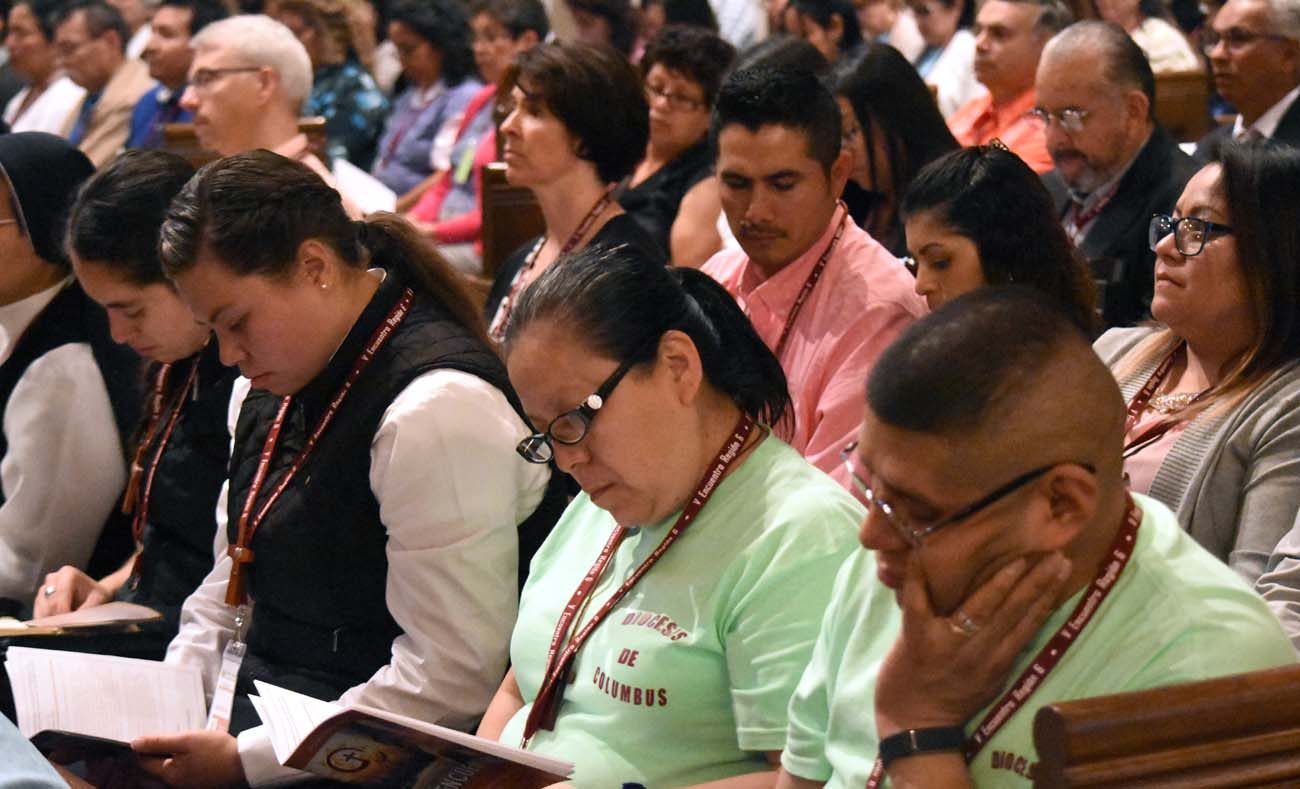 Delegates from dioceses in Michigan and Ohio gather and pray June 3 during the Region VI gathering at Sacred Heart Major Seminary in Detroit. The regional encuentro was one of many leading up to September's National Fifth Encuentro, or V Encuentro, a national pastoral planning movement for Hispanic Catholics across the United States. (CNS photo/Dan Meloy, The Michigan Catholic)

DETROIT (CNS) — There are an estimated 427,000 Hispanic Catholics in Michigan and Ohio, and every single one needs to be accompanied in a personal relationship with Jesus Christ.

How to achieve such a goal was the primary focus for priests, religious and lay leaders from 11 dioceses who met at Sacred Heart Major Seminary in Detroit June 2-3 for the Region VI meeting of V Encuentro, a gathering of church leaders to discuss how better to minister to the region’s Hispanic population.

Topics covered varied from the need to evangelize Hispanic neighborhoods and encourage more vocations, to making parishes more inclusive by encouraging Hispanic participation and speaking out for the rights of migrants.

At their root, each of the topics encompassed two key priorities: the importance of evangelizing youth and young adults, and accompanying Hispanic families who want to preserve their culture and faith in the United States.

“We (need to) reach out to our young adults, especially second- and third-generation Hispanics in our country who oftentimes don’t find the appropriate space within the confines of our community,” Cleveland Bishop Nelson J. Perez told The Michigan Catholic, Detroit’s archdiocesan newspaper.

Bishop Perez is the chair of the U.S. Conference of Catholic Bishops’ Subcommittee for Hispanic Affairs, which oversees the national encuentro process. The regional meeting — one of 14 taking place across the country — followed Detroit’s archdiocesan meeting in December and precedes the V Encuentro, or National Fifth Encuentro, taking place Sept. 20-23 in Grapevine, Texas.

“From the work I’ve done with my group and speaking with my brother bishops, I definitely want to see the church continue to deepen and intensify its engagement in the community,” Bishop Perez said. “I hope to see more parishes open up more ministries and reach out to Hispanic families.”

Whether it’s getting more teenagers involved in youth groups or combating the trend of young Hispanic men joining gangs and turning to violence, Detroit Auxiliary Bishop Arturo Cepeda said it is time for Hispanic Catholics in the United States to look past ever-present challenges and joyfully proclaim the good news in their communities.

“Pope Francis in his apostolic exhortation ‘Gaudete et Exsultate’ (‘Rejoice and Be Glad’) has invited us to precisely do that: Stop complaining and go out and accompany your people,” Bishop Cepeda said. The document is about “the call to holiness in today’s world.”

“Accompanying is about the invitation to go out to all men, women and children, if they are Christian or not, Catholic or not, and go out and walk with the people,” the bishops said.

During his talk at the gathering, Bishop Cepeda said many Hispanic families bemoan a shortage of Hispanic priests in the United States. However, when he asks parents whether their sons have considered the priesthood, they are quick to say it is not the vocation for their children.

“From my experience with Hispanic families in the United States, when they raise their children, most of them are relying on their children for subsistence, to have them be able to support the family with day-to-day bread on the table,” Bishop Cepeda said. “When it comes to considering the religious life, they find it difficult. Not that they don’t feel it would be a fulfilling life, but they feel they need to be together in order to survive.”

Bishop Cepeda said the way to increase vocations among the Hispanic community is by creating a church that is “alive.”

“The church is meant to be a field hospital, as Pope Francis says, where people heal and experience the presence and mercy of God,” Bishop Cepeda said. “A church that celebrates is what turns people into joyful missionaries.”

Leticia Caro, a lay missionary with the Missionary Servants of the Word in the Diocese of Columbus, Ohio, said Hispanic youths often feel pressured by parents to concentrate on school and career advancement, which can eclipse their relationship with God.

“For most Hispanic youth, there is a tremendous focus on school,” Caro said. “They focus on success; that’s what their parents mainly come to the United States for, to have a better life. They prefer to have good grades rather than to get to know God.”

Caro and others with the Missionary Servants of the Word go door to door in the Columbus area, visiting Hispanic neighborhoods to talk about God and the Catholic Church.

“Missionaries should be happy, upbeat and be someone people can relate to,” Caro said. “We need to give the youths a chance to help in the church; they need a job to do to make them feel like they belong.”

During the plenary sessions of the regional encuentro, representatives from the various work groups reported their parishes would like to see dioceses in Michigan and Ohio take greater steps in providing pastoral care for separated families and speak up for the rights of economically underprivileged Hispanic families.

“Hispanic Catholics are trying to get by the best they can, but if they don’t feel welcome or don’t understand the Mass or the parish events at an English-speaking parish, they don’t go,” said Father Timothy Nelson, pastor of St. Mary Star of the Sea Parish in Jackson, Michigan.

Father Nelson also is pastor of the Sacred Heart of Jesus Hispanic Community in Jackson, and was tasked by Bishop Earl A. Boyea of Lansing, Michigan, to lead the diocesan delegation in the encuentro process.

“If parents aren’t going to Mass, the kids don’t go; it’s as simple as that,” Father Nelson said. “Then we are missing an entire generation. It’s the Hispanic population who’s having the kids. If we forsake that whole generation, we as a church in the U.S. will suffer.”

Father Nelson said it’s up to pastors to make sure Hispanics are included in the daily life of the parish, from celebrating Masses in Spanish and taking up devotions that are dear to Hispanics, to ensuring Hispanics are represented on parish councils and committees.

In the Diocese of Lansing, and other rural dioceses throughout Michigan and Ohio, reaching out to the Hispanic community means more than just a welcoming face at the door.

“One thing I did in reaching out to migrants was to go to where they are, rather than expecting them to come where I am,” Father Nelson said. “I learned there was a large soccer tournament every Sunday on the grounds of a dairy farm in the northern part of the Lansing Diocese.

“So I went there, asked the supervisor if they’d be interested in a Spanish Mass before the games, and he said it was a great idea,” he explained. “So every Sunday, we celebrated a Mass before the games, to show people who aren’t registered at a parish that there is a priest available, that the church is reaching out to them.”