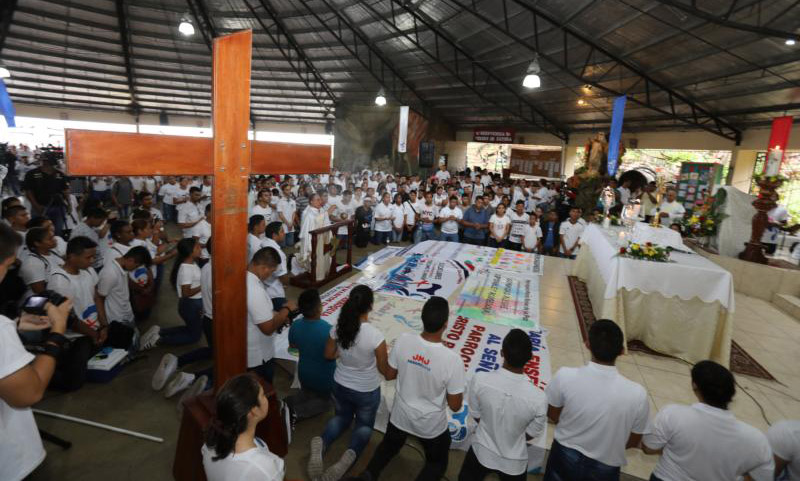 Young people pray near the World Youth Day cross during a vigil at the Church of Christ the Redeemer April 22 outside Panama City. The U.S. Conference of Catholic Bishops announced June 5 that the official World Youth Day Cross and Marian Icon will make a tour of the United States Aug. 19-27. (CNS photo/Bob Roller)

WASHINGTON (CNS) — The U.S. Conference of Catholic Bishops announced June 5 that the official World Youth Day Cross and Marian Icon will make a tour of the United States Aug. 19-27.

Panama Archbishop Jose Domingo Mendieta decided to extend the Latin American tour of the Cross and Icon to include stops in the United States.

Panama will host the 16th World Youth Day Jan. 22-27. It will be the first Central American nation to host the massive event, which will include a music festival, dozens of seminars for youth and an expected four-day visit by Pope Francis.

Bishop Frank J. Caggiano of Bridgeport, Connecticut, who is the World Youth Day episcopal liaison for the USCCB, is excited for the chance for the United States “to host these incredible and unifying symbols.” He said he hopes that “young people and young adults will have an encounter with Christ and his mother, Mary,” just as many people do during WYD.

The tour, which is being organized by the USCCB Secretariat of Laity, Marriage, Family Life and Youth, will take the cross and icon to Chicago, Miami, Houston, Washington and Los Angeles.

The cross, which St. John Paul II gave to the youth and young adults of the world in 1984, has been part of every WYD celebration and also made trips around the world. In 2003, St. John Paul presented the Marian icon to the world’s youth, and it has accompanied the WYD cross since then.

PREVIOUS: Maryland parishioners urged to help one another in flood aftermath

NEXT: Church leaders urged to ‘deepen, intensify’ engagement with Hispanics