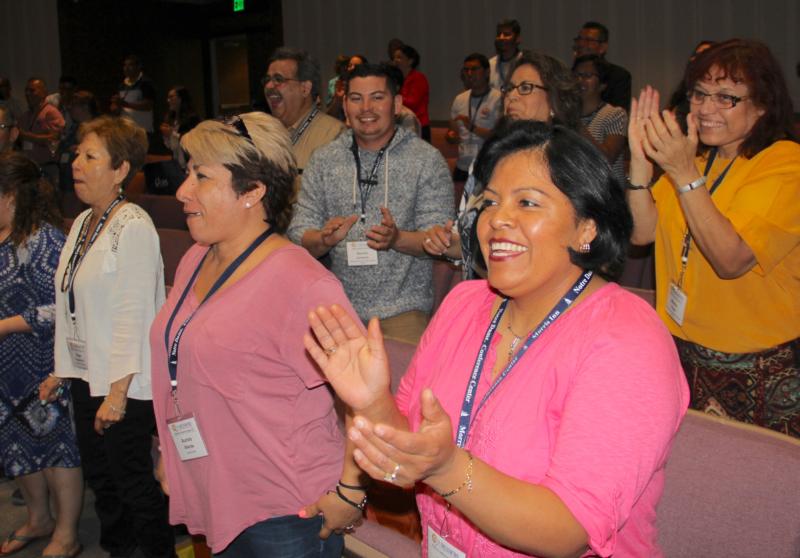 Delegates from Illinois, Wisconsin and Indiana enjoy a lighthearted moment during a plenary session at the Region VII encuentro held the weekend of June 8-10 at the University of Notre Dame in Indiana. (CNS photo/Jodi Marlin, Today’s Catholic)

Among the main issues participants considered as priorities for their region were: evangelization and leadership development among youth and young adults; support and care for immigrants in the country without documents; accompaniment of families; the development of intercultural competencies in parishes; and the need to grow more vocations.

“The encuentro has really brought to light to the authorities of the church the voices of the people. That’s why these encuentros are so important,” said Chicago Auxiliary Bishop Alberto Rojas, chairman of the Region VII encuentro.

Like other regional encuentros being held around the country, the gathering at Notre Dame was part of the process leading up to the Fifth National Encuentro of Hispanic/Latino Ministry — or V Encuentro — to take place Sept. 20-23, in Grapevine, Texas.

To ensure that the process was clearly understood by all delegates, who are predominantly Hispanic immigrants, the region opted to hold the sessions mainly in Spanish. A few participants preferred to speak in English, particularly Hispanic young adults.

Participants working in small groups selected their main challenges, priorities and strategies in 10 ministerial areas that were discussed and agreed on by all participants. Those areas were: vocations, ministry to youth and young adults, family ministry, faith formation and catechesis, liturgy, development and training of leaders, higher education and immigration.

“We hope the V Encuentro process can help us by listening to the problems, struggles, and challenges people face in our parishes and dioceses,” said Maria Rodriguez, a delegate from the Diocese of Fort Wayne-South Bend, who is an usher at Our Lady of Guadalupe Parish in Warsaw, Indiana.

During the plenary sessions, participants in the different ministerial areas stressed the importance of reaching out to families at all ages and stages. They discussed ways to provide support in faith formation, access to sacraments, strengthening marriages, getting to know their struggles and reasons why some might stop going to church and inviting them back.

Strategies on how to develop and promote Hispanic vocations to the priesthood and the diaconate from within their communities also were considered. Many leaders hope to see more access to opportunities in Spanish to deepen and strengthen their knowledge of the Catholic faith at all levels.

Sister Carmen Sotelo, a delegate from the Diocese of Joliet, Illinois, said that such knowledge is particularly essential when parish communities want to appropriately incorporate their customs and heritage into their worshipping practices.

“We need liturgical formation to know, for example, that you can’t play any kind of music during Mass and lectors must adequately prepare to be messengers of the Gospel,” said Sister Sotelo, a Missionary Sister of the Sacred Heart of Jesus and Our Lady of Guadalupe. “All who participate in the liturgy provide their beings in service to God.”

Many participants also voiced the need to have parish priests, bishops and personnel be open to understanding their culture and highlighted the need for more intercultural training and collaboration at all levels within parishes and dioceses.

Bishop Kevin C. Rhoades of Fort Wayne-South Bend, head of the host diocese for the Region VII encuentro, said he felt enriched by listening to participants’ needs, views, contributions and struggles. He joined the plenaries and the small group sessions that focused on outreach to youth and young adults.

“Their commitment and their faith are so evident, but also some of the challenges that they face,” Bishop Rhoades said about Hispanic young adults. “I was really impressed by this idea of Latino youth evangelizing other Latino youth and talking about ways to do that.”

He stressed the important role the church has in accompanying them and that they see that the church is with them in their struggles.

Besides Bishops Rhoades and Rojas, a handful of other bishops also participated in the weekend long event, among them were Archbishop Charles C. Thompson of Indianapolis; retired Bishop Placido Rodriguez of Lubbock, Texas, who resides in Chicago; and Bishop Timothy L. Doherty of Lafayette, Indiana. Also in attendance was Msgr. James Bartylla, vicar general of the Diocese of Madison, Wisconsin.

Sixteen dioceses comprise the episcopal Region VII and are spread throughout Wisconsin, Indiana and Illinois. It is estimated that over 3 million Hispanics live in the region, according to U.S. census numbers. The population of Hispanics in the area has grown by 56 percent since 2000, and about 54 percent of them are Catholic, according to the National V Encuentro team.

Hispanic immigrants in the region are predominantly from Mexico; others are from countries in Central and South America. U.S. census figures show that the Archdiocese of Indianapolis has the fastest growing Hispanic population, with the number up by 185 percent since 2000. The Archdiocese of Chicago and the dioceses of Joliet and Rockford, Illinois, have the largest Hispanic populations in the area.

High numbers of unskilled immigrants work in farms and meatpacking industries in the region. They are among those considered to be on the peripheries; they face hardships such as the lack of an immigration status, fears of deportation and lack of access to the Mass and the sacraments, said encuentro organizers.

“At one time we noticed that Mass attendance had dropped among Hispanics in the diocese, we found out that most of the people did not have driver’s licenses, so they were afraid to drive to go to Mass. They did not want to take any chances,” recalled Carlos Hernandez, director of Hispanic ministry for the Diocese of Green Bay, Wisconsin.

The dioceses that did not send delegates to this regional gathering were: Superior and La Crosse, Wisconsin, and Springfield, Illinois.

Strategies and recommendations will be included in a final report to be submitted to the National V Encuentro team and will be part of a working document to be utilized during the National Fifth Encuentro gathering. The recommendations that emerge at the national level will provide a basis for a pastoral plan for Hispanic ministry in the U.S. for the coming years.

“It’s going to be our pastoral plan, a plan of action,” said Enid Roman, director of Hispanic ministry in the Diocese of Fort Wayne-South Bend and episcopal regional chair. “We’re looking forward to it because it’s been over 30 years that we don’t have new guidelines, where are we going as Hispanic people with a voice in the church?”

PREVIOUS: Church praised for proactive response on abuse but warned of complacency