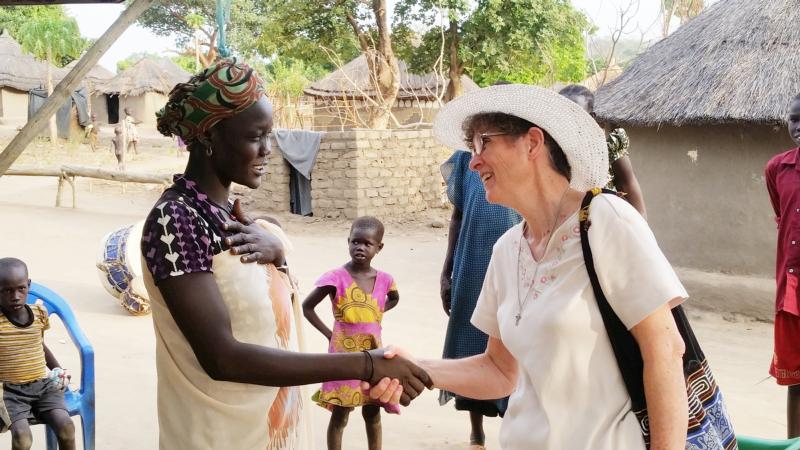 WASHINGTON (CNS) — It all started with a note pinned to the convent’s bulletin board.

“Urgent! Refugees arriving at SFO from Southeast Asia. Volunteers needed to assist at the International Terminal.”

SFO is the airport code for San Francisco International Airport where more than 700 refugees from Vietnam, Cambodia and Laos, described as “boat people,” were arriving daily in 1980 when Mercy Sister Marilyn Lacey happened to see this request for help pinned alongside prayer requests, time for vespers and the announcement of an upcoming lecture.

Sister Marilyn, who had been teaching high school math in Los Angeles but at the time was doing administrative work at the order’s motherhouse near San Francisco, said the note caught her eye, so much so that she grabbed two friends and they went to the airport that afternoon to help.

The initial experience was daunting: finding families and escorting them to their connecting flights — right up to buckling them in their plane seats in the days before Sept. 11 security rules.

Her first task of escorting families — who didn’t speak English and were afraid to briefly part with their belongings at the security check — then moved to temporarily hosting some of these families at the convent if they experienced flight delays or other holdups.

The experience, so unlike anything she’d ever done, changed her.

That next year, she volunteered to teach English in a refugee camp in Thailand and then returned home and obtained a master’s degree in social work. From there she worked at Catholic Charities in the Diocese of San Jose, California, and was the agency’s director of refugee services from 1983 to 2005.

While at Catholic Charities, she attended a conference where the South Sudanese bishop describe the situation of 1 million people displaced by civil war in an area with no schools, hospitals or clinics. After the talk, Bishop Paride Taban, now retired bishop of Torit, South Sudan, invited Sister Marilyn to visit and see the situation for herself.

What she saw moved her so much she planned to do whatever she could to help them which in 2008 translated into her founding and being the executive director of a nonprofit group, Mercy Beyond Borders, to help educate girls and support entrepreneurial projects run by displaced women in southern Sudan, where she said women are viewed as less valuable than cattle.

Years later, the group also provided this same ministry to girls and young women in Haiti.

The group is not sponsored by the Mercy sisters, but is very much in the spirit of the order and has its blessing, Sister Marilyn said. She also feels she is following the footsteps of her order’s founder, Sister Catherine McAuley, who dedicated herself to the poor.

The 69-year-old sister, who has worked with refugees for more than three decades now since that time she helped at the airport, said “the work is wonderful” and has taught her so much.

“We have it backwards when we think we will help them. They show us what matters,” she told Catholic News Service when she was in Washington earlier this year for an award presented by The Canales Project, a group that uses the arts as a tool for social change. The group honored 20 women in song including Hillary Clinton, former first lady Michelle Obama and Supreme Court Associate Justice Sonia Sotomayor.

The year before, Sister Marilyn received the Opus Prize, which includes a cash award of $1 million and in 2001 was honored by the Dalai Lama as an “Unsung Hero of Compassion.”

She acknowledges that the work is a long way from her experience teaching math where you can just say: This is the way it will be and you know exactly what you’re doing. Her work now involves helping women who have witnessed horrific violence and lived in abject poverty but are still desperate to learn and to make their lives better.

She also doesn’t have the feeling that she did years ago when she first started working with refugees — that she was coming in to save them or fix everything.

“I’ve given up on that,” she said with a laugh, acknowledging that she does a lot of listening and then tries to steer these women in a better direction.

Sister Marilyn’s calm spirit, quick laugh and love for women who have been through so much is simply living the Gospel, as she puts it, adding that it is under the mandate to welcome the stranger.

“It’s thrilling to see them transform,” she said. “I feel like a proud grandma.”