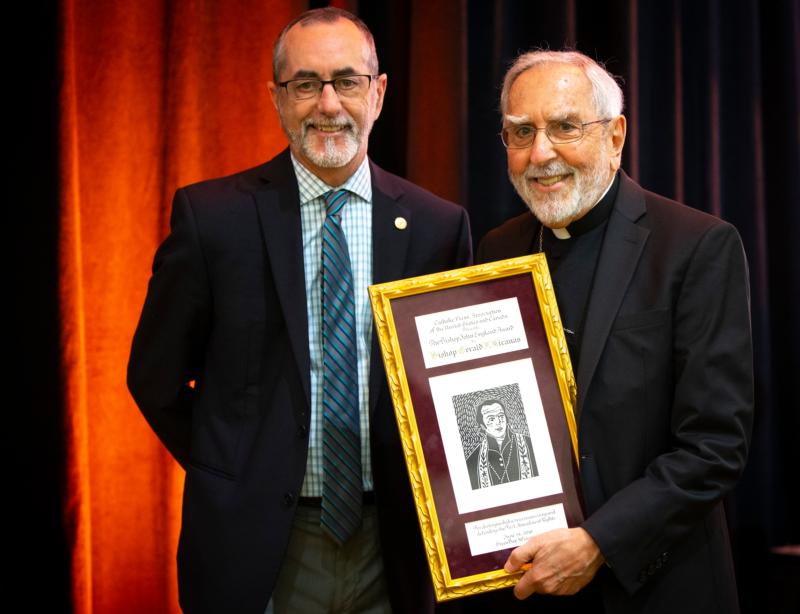 Catholic Press Association executive director Timothy M. Walter, left, stands next to retired Bishop Gerald F. Kicanas of Tucson, Ariz., June 14 after he was presented with the Bishop John England Award at the Catholic Media Conference in Green Bay, Wis. The Catholic Press Association gives the England award each year to honor a publisher of a Catholic publication who used the Catholic press to defend the rights of religion and individuals in a free society. (CNS photo/Chaz Muth)

GREEN BAY, Wis. (CNS) — Bishop Gerald F. Kicanas accepted the Catholic Press Association’s 2018 Bishop John England Award June 14 by praising the work of the Catholic press and stressing how critical Catholic journalism is to the church’s message getting out to the world.

Presented annually, the award recognizes publishers in the Catholic press for the defense of First Amendment rights, such as freedom of the press and freedom of religion. It is the CPA’s highest award for publishers.

Bishop Kicanas retired as head of the Diocese of Tucson, Arizona, last October after 14 years as its shepherd. He was appointed Tucson’s coadjutor in 2002 and became head of the diocese a year later. As Tucson’s bishop, he was publisher of the diocesan newspaper, which was called The New Vision for many years and is now called Catholic Outlook.

Honored during a lunch at the Catholic Media Conference in Green Bay, he called “a great privilege” to receive the England award. “I have admired and respected the CPA for many years.

Bishop Kicanas called it “a great privilege” to serve in Tucson and praised the diocese’s communications office. “They’re the very best.” To the luncheon crowd of Catholic journalists, he said, “I know the bishops appreciate greatly the work you do. Thank you for all you do.”

Bishop Kicanas told the story of an older fiddler teaching the art of fiddling who was asked: “Why do you do this?” “I don’t want the money,” the musician replied. “I have a passion to hand on the music.”

“That is what we need today: the passion” for this work, Bishop Kicanas said. The U.S. bishops make many statements — and I doubt many people read them. Some of the bishops themselves probably don’t,” he said. “It’s witness and works of charity that make all the difference.”

He noted that Vatican official Natasa Govekar, director of the theological-pastoral department of the Secretariat for Communication, said that “people marvel at Pope Francis, not so much for his words, which are important, but his smile.”

Bishop Kicanas said when former British Prime Minister Tony Blair was asked why he was becoming a Catholic, he responded: “Everywhere I went in the world, I saw the church doing incredible things for the weakest and most vulnerable, and I want to be part of that, that family.”

He said he considers himself a journalist, starting with his writing for a newspaper in high school.

He also called it a privilege to have served on the U.S. Conference of Catholic Bishops’ communications committee for years, including when Helen Osman, a former editor in the diocesan press, was communications secretary. He praised her for all the work she did for the USCCB. Osman is president of Signis, the international organization of Catholic communicators.

The bishop’s nomination for the England award read in part: “For his more than 50 years as a priest, Bishop Gerald F. Kicanas has been a champion of Catholic social teaching at its ground level. Whether promoting the messages of immigration reform, overseas aid through Catholic Relief Services, or simply extending a hand of solidarity through the cold steel of a border wall, Bishop Kicanas has been a living icon of the Good Shepherd.”

The nomination described “his savvy and steely use of diocesan media, especially his ground-breaking blog ‘Monday Memo’ and the Catholic Vision/Catholic Outlook newspaper.” He’s used his weekly blog to communicate directly to priests, parishes, Catholics “and anyone who requests it. (He) used it a primary teaching tool, a travelogue, an expression of gratitude, an update on clergy, and on more than a few occasions, to break hard or challenging news to the Catholic faithful.”

“As a publisher, Bishop Kicanas had the highest respect for the newspaper. He left editors alone to edit and publish the important news of the day, and he supported the paper full throat with columns in English and Spanish.”

With Catholic communications, the church can make its message “loud and clear,” especially with regard to the right to life and human dignity of all, including immigrants to this country.

He said the award’s namesake was an Irish immigrant himself. Bishop England, head of the Diocese of Charleston, South Carolina, founded The Catholic Miscellany in 1822. As publisher of the newspaper, Bishop England defended separation of church and state, espoused freedom of religion and fought slavery. He also reached out to immigrants and refugees.

“Today … our hearts go out to our brothers and sisters who have fled violence and difficulty to have a better life,” Bishop Kicanas said. “We have to be a country that values human life and does not separate children from their families (at the border). We stand for life. We value life. We uphold the dignity of all human life. You get that message out.”