Maryland parishioners urged to help one another in flood aftermath 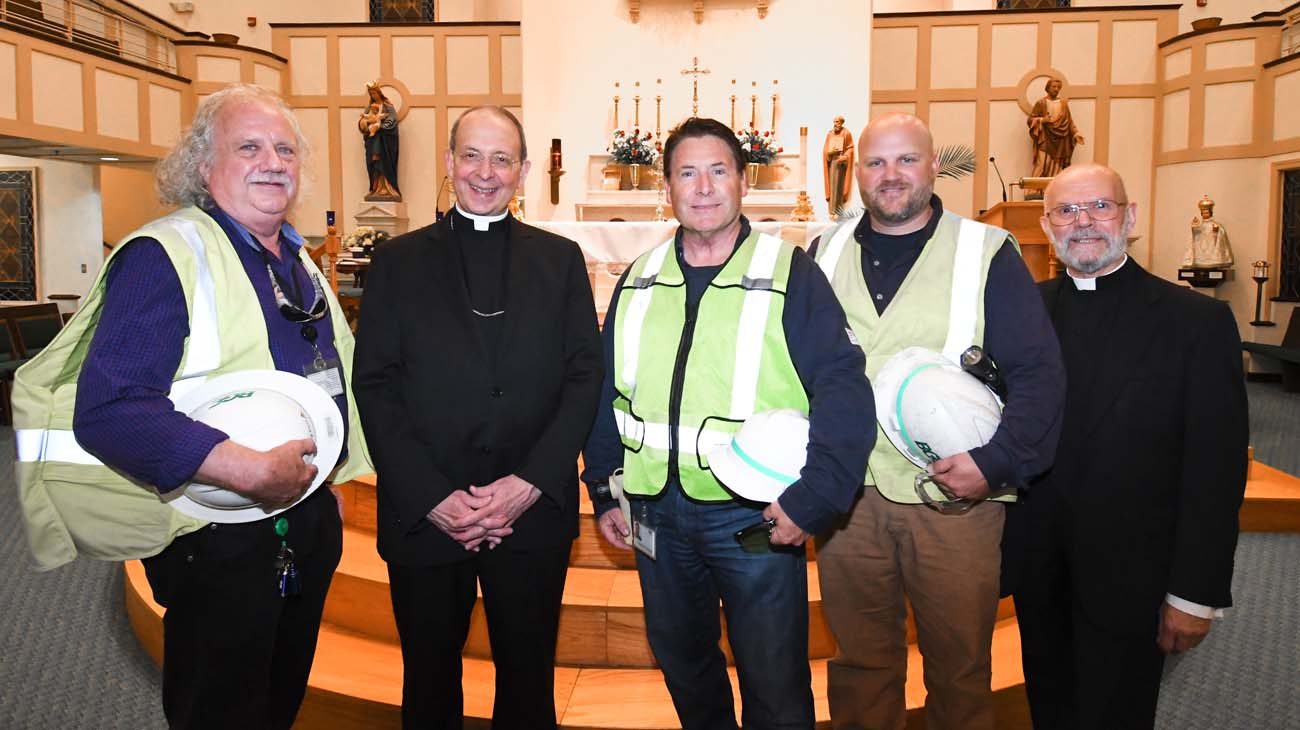 ELLICOTT CITY, Md. (CNS) — In the immediate aftermath of the flood that washed through Main Street and other parts of historic Ellicott City May 27, St. Paul Church, perched on the hill above the floodwaters, was able to serve folks in little ways.

The church acted as a way station for those trying to get home, and coordinated transportation for some who could not get to their vehicles. Seven inches of rain fell in one afternoon on the town and nearby Catonsville.

The first couple of days, the parish had limited electricity and no running water, according to the pastor, Father Warren Tanghe. Over the next several days, it served as a base of operations for Baltimore Gas and Electric power crews.

Just six days after the flood, and on the day when some Main Street business owners and residents were allowed brief access to their properties, Baltimore Archbishop William E. Lori celebrated Mass June 2 for the vigil of the feast of Corpus Christi at St. Paul.

He told a story of how, early in his priesthood, he stopped to visit a woman who was dying. Though he expected to stay for only a short while, when she asked him to stay — as she did not expect to live much longer — he stayed with her until she passed away.

In prayer before the Blessed Sacrament the next day, he said, he could imagine the Lord telling him that as the Lord stays with his people, the young priest should do the same.

“It was this early lesson in my priesthood that prompted me to come here today as you cope with the aftermath of severe flooding, a severe hardship coming so soon after the last catastrophic flood in 2016,” the archbishop said in his homily. “A number of you, I know, were able to view your flood-damaged properties today and you face difficult questions and decisions as you look to the future.”

He acknowledged that a number of people from inside and outside the close-knit community are pitching in to help.

“I came today just to be with you, to pray with you, to offer you a word of love and encouragement, and in this difficult time, to remind you of the abiding presence of the Lord in our midst. For this is what the feast of Corpus Christi is all about — the true eucharistic presence of Jesus body, blood, soul and divinity,” Archbishop Lori said.

“A principal message of today’s feast might be summed up this way: As Jesus is present to us in the Eucharist, so we need to be present to those in need,” he added.

He said the presence of loved ones can be a comfort in times of tragedy, even if they cannot change the situation. “We also rely on the friendship and love of those who know us well, who know our strengths and weakness, who understand how we react to the curveballs that life inevitably hurls at us in one form or another.

“Jesus is present to us in the same way. Pope Francis often reminds us that the Lord knows us, loves us and cares about us,” the archbishop said.

Reflecting on the day’s readings about the Eucharist and Christ’s sacrifice for us, Archbishop Lori called on the parishioners in Ellicott City similarly to sacrifice themselves for others.

“As we experience the depths of the Lord’s love for us, do we not also hear the Lord saying to you and me: ‘Love one another as I have loved you’?” he asked. “In reaching out to your friends and neighbors who are enduring this difficult plight, you give evidence that the Christ whom you receive lives in you, speaks with your voice and serves the needs of others with your hands.”

The archbishop encouraged the people to allow the eucharistic presence of Jesus to make them more present to one another and give themselves to one another, even in the most trying of times.

“That is the key to rebuilding not merely our town but indeed our very lives,” he said.

The archbishop also acknowledged the help of first responders and rescue workers and prayed for Eddison Hermond, a National Guardsman who died after being swept away by flood waters while aiding a shop owner.

After the Mass, Father Tanghe noted that rather than providing shelter and other immediate assistance now, the parish was focused on helping people deal with the grief they are feeling.

Two years ago, people readily said they would rebuild, with an almost fervent spirit. This time, that’s not so much the case.

He said his homily the next day would begin and end with hope.

He said that in confession, sometimes he hears words of despair. “One has to acknowledge that. One can’t explain why these things happen.”

Father Tanghe said he thinks in many ways the impact from this flood will be more extensive than in 2016. He thinks the parish will be called on to help people who have been displaced find longer-term housing.

“People are asking whether they want to rebuild,” the pastor said. A lot of that hinges on developing a solid plan to mitigate the potential for flooding in the future, he added.

PREVIOUS: Panel sees return to respect for institutions as antidote to polarization

NEXT: World Youth Day Cross and Marian Icon to tour U.S. in August