Panel looks at how Catholic social teaching can address polarization 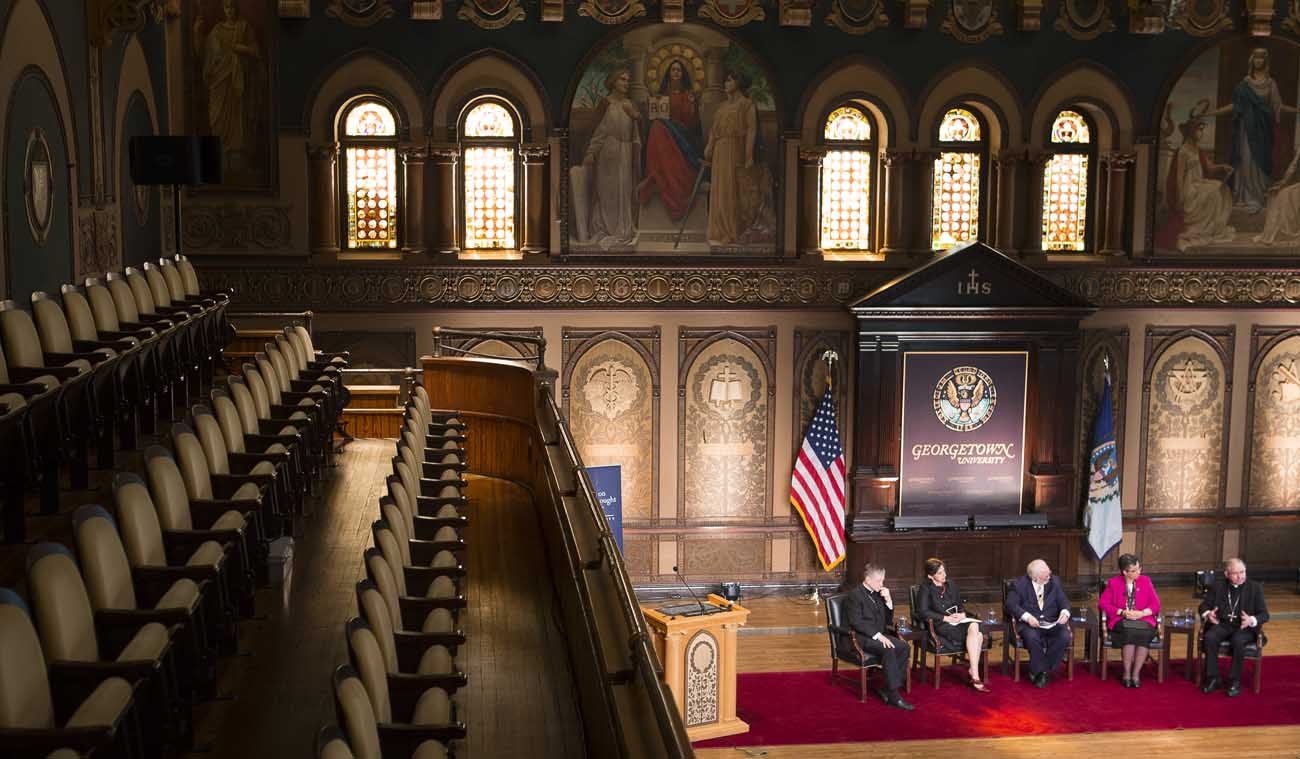 WASHINGTON (CNS) — Sister Teresa Maya grew up hearing her “abuela” say, “People understand each other by speaking to one another.”

In her grandmother’s wisdom, she said, lies a way to address the polarization that seems to affect every aspect of U.S. society today.

Fostering “encuentros,” or encounters, on the personal level and people “really being interested in the other side of the story” would go a long way to encourage folks with different opinions to dialogue about all manner of issues with civility, she told an audience at Georgetown University June 4.

Sister Maya, a Sister of Charity of the Incarnate Word from San Antonio, is president of the Leadership Conference of Women Religious. She was one of four speakers at the public session of a June 4-6 invitation-only conference on “Though Many, One: Overcoming Polarization Through Catholic Social Thought.”

Organizers said the conference was meant to be a starting point to bring about Pope Francis’ vision of the church responding to human hurts and social challenges by living out the joy of the Gospel.

Moderator John Carr, director of the Initiative on Catholic Social Thought at Georgetown, asked the audience to “check your impulses” at the door as far as trying to decide which panelists were “conservative” or “liberal.”

He asked them to consider who among the speakers “has stood up for the dignity and lives of the unborn” and for women, the vulnerable, immigrants, the poor and families and “against violence in our communities.”

“It’s really a trick question. Every one of these people has stood up for” all those groups, said Carr.

He asked the speakers what they see as “the major cause or cost of polarization” in the country and how the principles of Catholic social thought could help everyone work for the common good.

“The fear of the other has poisoned our souls. … We’ve allowed it to divide us,” said Sister Maya, who noted that as an immigrant herself, from Mexico, she brings “a migrant’s view to this conversation.”

She grew up with a deep fascination of the American idea that all people are created equal, that life, liberty and the pursuit of happiness are human rights that cannot be taken away. In entering religious life, she said, she was convinced Jesus held the clues to create a world where these truths would hold for all.

She still believes in this “narrative of human rights” but said it “is threatened because we live in a polarized society.”

“We stay in our bubbles, with people we know,” feeding our fears, when “we must realize we breathe the same air,” she said. “Unless you can get to know the other, it can justify the most terrible thing. … The antidote to fear is hope.”

Archbishop Gomez said Pope Francis talks a lot about how his pontificate is “not only a change of era” but how this is “an era of change. Everything is changing.”

The “simple and most obvious thing” contributing to polarization is “the internet,” he said. It is making talking to each other more difficult. Secularization also a major factor, he said.

“We are used to a Christian culture,” the archbishop said. “We assume that’s the way it is, but the whole country is becoming more and more secular.” He also took issue with the prevailing notion that faith and science are incompatible.

“This nation is saying, ‘We trust science more than we trust faith,’ like there’s a contradiction between science and faith, and that’s not real,” the archbishop said.

Against this backdrop, it is “important to understand who we are, who God is, how we can relate to God,” he continued. Catholics are called “to become missionary disciples, to go out of our comfort (zone) and be united as a people and bring the teachings of our Lord Jesus Christ to our people. Everything is based on God’s plan for humanity, for each one of us.”

If you watch kids of different backgrounds playing together, you see “they are not afraid” of one another, the cardinal said. “We are taught to be afraid and we have to own that.”

The cost of polarization, he said, “is the division we face in our nation. We are not just separated by ideas but into groups. That’s the difference between partisanship and polarization. Partisans used to be able to get things done, to reach across the aisle. But we are polarized, we have our own sources of information.”

Such division leads to lawmakers not getting anything done legislatively and people dehumanizing “the other” through rhetoric that is anti-immigrant and racist, he added.

“I think we often refuse to credit different ‘gifts'” people bring to the discussion on issues, and so fail to learn from one another, said Alvare. Society being so materialistic also sharply divides people, which is coupled with the fact people are short on time and patience, she added.

“The shortage of time is very much related to economic life,” Alvare added. “We don’t have time to be patient with people” and listen to other views.

She described receiving violent hate mail in reaction to comments she has made on the human costs of the sexual revolution and how poor women especially are suffering the consequences of this revolution.

Alvare said sharp disagreement is good but people also need to have good facts and sources, and they must pay attention to “tone, tone, tone” when they talk to one another, she said.

“If you feel dizzy and out of whack” in this polarized society, she said, “Catholic social teaching insights would help account for what we’re feeling and also (help us) find a way forward.”

On moving forward, Sister Maya said that will not happen until the country has an honest conversation about “the unresolved issue of racism,” which she said is “at the heart of U.S. polarization.”

She also said these times call for “contemplative dialogue,” and people need to learn tools to listen deeply for common ground, respect silence and employ an “economy of words.” Sister Maya also said lessons on how to dialogue can be learned from how LCWR leaders before her and church officials in Rome, during the Vatican probe of the leadership organization eventually could find common ground and reach an understanding and respect for each side’s views.

To move forward on the immigration issue, Archbishop Gomez said “what we all need to see” is that “immigrants are people — men and women, children, boys and girls.” Talk about the nation’s legal principles is one thing, he said, “but we must “see these people are just like us” and are coming here “for a better life.”

Carr asked if Pope Francis is bringing a new kind of leadership to applying Catholic social thought to today’s realities or whether he is continuing the leadership of his predecessors.

Cardinal Cupich replied with a quote he said he has often heard that “captures the continuity”: “John Paul II told us what to do, Benedict said why we should do it and Pope Francis says, ‘Do it.’ … Pope Francis is … really an activist pope wanting to make the church a field hospital.”

PREVIOUS: New Mexico archbishop prays for all ‘in harm’s way’ during wildfire

NEXT: Priest: Immigrants’ perseverance, faith inspires those who work with them