Priest: Immigrants’ perseverance, faith inspires those who work with them 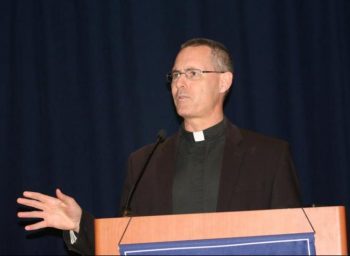 TUCSON, Ariz. (CNS) — If people are going to serve the immigrant community, they always must look for the good being done by that community, said Jesuit Father Sean Carroll, executive director of the Kino Border Initiative.

He made the comments in a keynote speech on the first day of CLINIC’s annual convening May 30-June 1 in Tucson.

“You have to see the good and bad together,” said Father Carroll, discussing the ministry that focuses on immigrants trying to cross into the United States from Nogales in Mexico’s Sonora state into Nogales, Arizona. “That helps us focus on giving and not counting the cost.”

CLINIC, short for Catholic Legal Immigration Network Inc., was founded in 1988 by the U.S. bishops hoping to create a network of loosely affiliated diocesan immigration agencies.

Father Carroll also cited an interruption to a homily he once preached, which led to small discussion groups at a coffee hour following Mass.

“I was truly amazed at what happened afterward,” he said. “That is precisely what you want to have happen.”

With the latest government policy forcibly separating children from parents who cross the border illegally, witnessing those events can have a profound negative impact on immigrant advocates, he said. “These challenges affect us. I know they affect me. Sometimes, it can lead to real discouragement.”

Also, witnessing how quickly U.S. citizens can cross back into this country — compared to the labored passage of those lacking passports and other documentation — can lead to a rush of emotions, including fear and bitterness, eventually leading to a numbing effect.

“What helps you with it? What helps you get up in the morning and show up every day?” he asked. It begins with being well-centered, stepping away and making sure to deal with your own feelings regularly, he said.

Being around others who also help and care for others also provides encouragement, Father Carroll said, citing the work of the Missionary Sisters of the Eucharist who minister in Nogales in Mexico. He called them agents of inspiration because of “sense of hospitality and, accompaniment and for creating a caring environment.”

The sisters also take one day a week for a party for staff and workers. “Those (events) bond us as a staff,” Father Carroll said. “I can’t emphasize enough the impact that care has on the community.”

The immigrants themselves, with their perseverance and faith, also provide inspiration to him, Father Carroll said.

He spoke of the more than 40,000 meals served at the Kino Border Initiative’s “comedor,” or kitchen, on the Sonoran side of the U.S.-Mexico border last year, and of the hundreds of women and children also assisted through their shelter near the comedor, as examples of the good things going on in the ministry.

“It’s easy to focus on darkness, but it is just as easy to find God,” he said. “We find the grace to continue.”

Hang on to hope, he added.