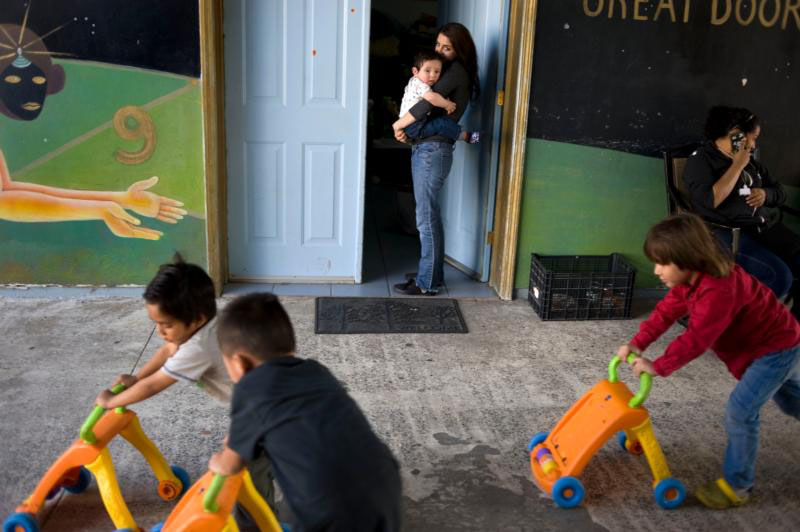 A volunteer watches children play at a shelter for migrant women and children in Tijuana, Mexico, June 20. The shelter is run by the sisters of the Missionaries of St. Charles Borromeo and has about 80 people who intend to seek asylum in the United States. (CNS photo/David Maung, EPA)

WASHINGTON (CNS) — At a congressional panel discussion, Dr. Sanjeev K. Sriram, a pediatrician in Southeast Washington, discussed the long-term effects of separating children from their parents.

The panel, sponsored by Rep. Bennie Thompson, D-Mississippi, met June 20 in response to the Trump administration’s policy of separating families illegally entering the United States at the U.S.-Mexico border and consideration of two bills in the House of Representatives to address the issue.

Although the executive order President Donald Trump signed later the same day ended the policy of separating children from their parents by directing that families be detained together as they await criminal proceedings and the adjudication of their asylum claims, the over 2,000 children already separated from their parents will suffer for the rest of their lives as a result of the separation, according to Sriram.

Sriram, who is also an assistant professor of pediatrics at the George Washington University School of Medicine, began his speech by saying that, since the policy along the U.S.-Mexico border meets the standard for child abuse, he called up Child Protective Services to report the Trump administration for child abuse. CPS told him to contact authorities. He said that, before the panel convened, he visited the offices of various members of Congress with the same message.

“Pediatricians take child abuse extremely seriously in our line of work,” he said. “We expect that Congress should too.”

Sriram explained that toxic stress is the main cause of long-term damage to the children’s developing brains and bodies.

“The things these kids have endured in their countries of origin puts their brains, their hormones and their organ systems through this stress, and, at the border, all that stress they’ve experienced is being compounded by the cruelty of government officials.”

He also spoke about kids with similar experiences he had seen in his practice. “What we see in our clinics are kids suffering from anxiety and PTSD.”

The toxic stress also can exacerbate already existing conditions. Later in life, children who experienced toxic stress are more likely to suffer from cardiovascular disease and have an increased risk of cancer.

He emphasized that these concerns and the language he used to describe the damage was not merely his own. “I’m not the only doctor expressing the damage in these terms. Pediatricians have visited the detention centers.”

Sriram said that the policy of separating children from their parents is especially damaging because “the parent-child bond can be enormously protective against toxic stress.” He mentioned the ability of a parent to reassure a child that everything will be all right as one way that a parent can reduce the amount of stress a child feels. In addition, the mere presence of a parent also reduces a child’s stress.

The separation, Sriram said, interrupts that bond “which is not born in and of itself. Parents work to maintain it, and it takes even more work to make it a healthy and positive bond.” Not only does the separation remove the bond, but it also needs to be restored when the parent and child are reunited.

Sriram encouraged members of Congress to go visit the detention centers and see the conditions for themselves.

“You don’t have to do it alone,” he said, recommending that they bring other people with them to have multiple sets of eyes and ears.

“The insights aren’t one person’s all alone,” he said.

NEXT: As immigration woes rise, lawmakers can’t agree on solutions