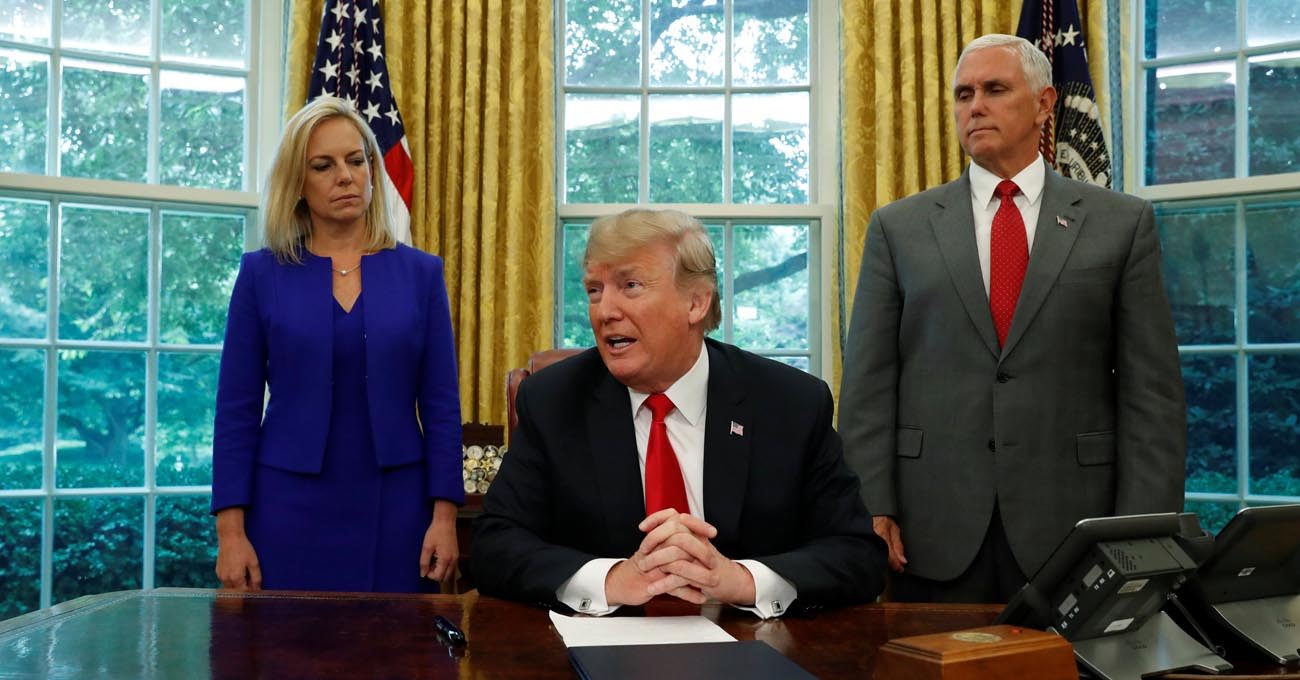 President Donald Trump is seen with with Secretary of Homeland Security Kirstjen Nielsen and Vice President Mike Pence at the White House June 20 prior to signing an executive order to halt the separation of families. (CNS photo/Leah Millis, Reuters)

The crisis was spawned when Attorney General Jeff Sessions announced a “zero tolerance” policy for border crossers. Under the policy, adults would be charged with a felony rather than a misdemeanor for crossing the border. Under federal statute, those charged with felonies cannot have their children detained with them.

The government earlier in June said 1,995 minors had been separated from 1,940 adults who had crossed the U.S.-Mexico border, although some minors had crossed without their parents or adult kin.

The policy and its upshot stirred some of the most hostile reaction yet of any Trump initiative.

Hours before the executive order was signed, Pope Francis said he stood with the U.S. bishops, who had condemned the family separation policy, which has led to children being held in government shelters while their parents are sent to federal prisons.

Mexico’s bishops likewise decried the policy. Homeland Security Secretary Kirstjen Nielsen was heckled June 19 while she dined at a Mexican restaurant in the Washington area.

Every living former first lady and the current first lady, Melania Trump — herself an immigrant from Slovenia — expressed their sorrow, or a stronger emotion, at the sight of children being separated from their parents.

“I don’t like the sight or the feeling of families being separated,” Trump added. “This will solve that problem and at the same time we are keeping a very strong border.”

Even so, the executive order is not necessarily a panacea. It allows the Department of Homeland Security to detain families together “under present resource constraints.” The “temporary detention policy” also is only in effect “to the extent permitted by law and subject to the availability of appropriations.”

Pence criticized those who make a “false choice” between being “a nation of laws” and showing compassion.

“We expect the House to act this week. We expect them to do their job,” Nielsen said. The House is considering two immigration bills, although neither dealt in particular with the family separation policy.

“You will have a lot of happy people,” Trump said as he signed the executive order. “What we have done today is we are keeping families together.”

NEXT: Cardinal McCarrick’s 60 years of ministry in church had global impact