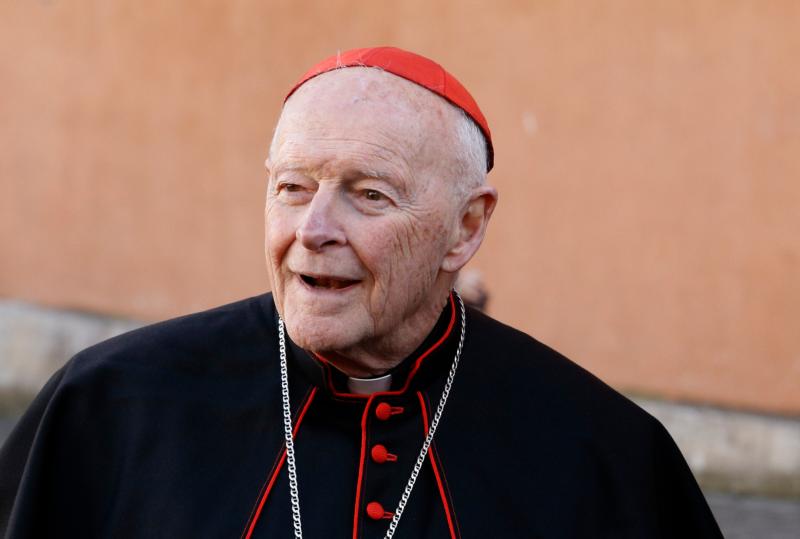 Cardinal Theodore E. McCarrick, retired archbishop of Washington, is pictured during a reception for new cardinals at the Vatican Feb. 22, 2014. Cardinal McCarrick said he will no longer exercise any public ministry “in obedience” to the Vatican after an allegation he abused a teenager 47 years ago was found credible. (CNS photo/Paul Haring)

WASHINGTON (CNS) — The Vatican has told Cardinal Theodore E. McCarrick, the retired archbishop of Washington, that he can no longer exercise any public ministry after an allegation that he abused a teenager 47 years ago was found credible.

While maintaining his innocence, the cardinal said June 20 he had cooperated with church authorities’ investigation of the claim and that he would obey the Vatican directive on ministry.

Even in retirement, after decades of regularly testifying before Congress and attending White House meetings on public policy, Cardinal McCarrick kept abreast of a range of policy issues, domestic and international.

As a board member of Catholic Relief Services, the U.S. bishops’ overseas relief and development agency, he continued to travel the world and had regular speaking engagements and other activities, in the United States and beyond.

In May 2014, he was part of a U.S. bishops’ delegation that traveled to Iran to meet quietly with Iranian religious leaders. In November 2013, he toured areas in the Philippines that had been devastated, visiting residents and celebrating Mass.

Then-Archbishop McCarrick was installed to head the Archdiocese of Washington in 2001. Just three weeks later he was made a cardinal. He was the fifth archbishop of Washington and the fourth in a row to be named a cardinal.

As canon law requires of all bishops, the cardinal submitted his resignation to Pope Benedict XVI when he turned 75 on July 7, 2005. However, the pope asked the cardinal to continue heading the archdiocese. He retired in 2006 at age 76, and now-Cardinal Donald W. Wuerl was named to succeed him.

Ordained a bishop in 1977, he was an auxiliary for the New York Archdiocese until 1981, when he was made the first bishop of the newly formed Diocese of Metuchen. In May 1986 he was named archbishop of Newark.

He was there for 14 years. During his tenure in Newark, he ordained 200 priests, more than any other U.S. diocese in that period.

In 1997, as a speaker in the Distinguished Lecture Series of the U.S. State Department’s Open Forum, he called for U.S. policy at home and abroad to focus on the poor and the vulnerable.

“We believe that we are called to put the needs of the poor first in our national and global choices,” he said.

In 1998, he chaired and hosted a major international conference on the ethical dimensions of international debt, co-sponsored by the Vatican and U.S. bishops, at Seton Hall University in his archdiocese. The conference is credited with having a significant impact on the U.S. and world commitment to reducing the debt of heavily indebted poor countries.

He set an example of debt forgiveness in his own archdiocese early in the jubilee year 2000 by forgiving some $10 million that parishes, schools and church agencies owed the archdiocese.

In 2001, he was named to succeed retiring Cardinal James A. Hickey in the nation’s capital.

He ordained 43 men in his time in the nation’s capital, including a class of 12 that was the largest in more than 30 years.

Often in the news for his leadership in international justice and peace issues, Cardinal McCarrick headed the U.S. bishops’ committees on migration, international policy and aid to the church in Central and Eastern Europe.

At a White House ceremony Dec. 6, 2000, he received the Eleanor Roosevelt Award for Human Rights.

Born in New York July 7, 1930, Theodore Edgar McCarrick was the only child of Theodore Egan McCarrick, a sea captain, and Margaret McLaughlin McCarrick. Growing up in the Great Depression, he was 3 when his father died and his grandmother moved in to help raise him while his mother worked.

He was 22 and had studied in Europe for a year-and-a-half, learning to speak French and German, before he entered St. Joseph Seminary in Yonkers, New York. He earned a master’s degree in history there and was ordained a priest of the New York Archdiocese May 31, 1958.

After ordination he was assigned to The Catholic University of America in Washington. He spent seven years there, earning a master’s degree in social sciences and a doctorate in sociology while serving first as an assistant chaplain and later dean of students and director of development.

From 1965 to 1969, he was president of the Pontifical Catholic University of Puerto Rico.

He returned to New York in 1969 as archdiocesan associate secretary for education, and the following year he became secretary to New York’s Cardinal Terence Cooke.

On June 29, 1977, he was ordained a bishop, serving as an auxiliary for the archdiocese.

He frequently traveled abroad to trouble spots, especially as chairman of the bishops’ Eastern Europe and international policy committees.

Besides English, French and German, he could handle Spanish and Italian “reasonably well” and “can understand Portuguese and a little Polish.”

He was on the board of trustees of The Catholic University of America and the boards of CRS and the Basilica of the National Shrine of the Immaculate Conception.

In addition to the committees he headed for the U.S. Conference of Catholic Bishops, he served or had served on the bishops’ Administrative Committee and their committees on doctrine, the laity, Latin America, Hispanic affairs and missions.

He was a founding member and president since 1997 of the Papal Foundation, established in the 1980s to assure the long-term solvency of the Holy See and contribute to its activities and papal charities around the world.

He was a member of the Synod for America in 1997 and served on its post-synodal council.

He spent a year from January 2011 to January 2012 as a visiting scholar at the Library of Congress, working out of an office in the library’s historic Thomas Jefferson building.

During the yearlong post, Cardinal McCarrick looked at into how the Amman Message has evolved and what its effects have been on the teachings and practice of Islam. The subject fit one of his goals for retirement: to build bridges between Catholicism and Islam.

The Amman Message is a declaration recognizing the common principles of eight traditional schools of Islamic religious law.

Cardinal McCarrick’s interest in Islam and involvement with relations between Christians and Muslims went back many years. In the mid-1990s, he served on the State Department’s Advisory Committee on Religious Freedom Abroad and was one of the first members of the U.S. Commission for International Religious Freedom when it was created in 1999.

He also was chairman of the Franciscan Foundation for the Holy Land and continued to be involved in a variety of Holy Land and Middle East peace organizations and dialogues.