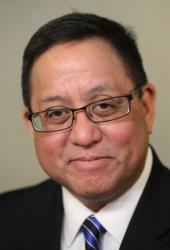 WASHINGTON (CNS) — An increase in calls to dioceses to report claims of clergy sexual abuse has happened before, and is likely to happen again in the wake of the credible claim lodged against Cardinal Theodore E. McCarrick, retired archbishop of Washington, according to the head of the U.S. bishops’ Secretariat for Child and Youth Protection.

Those claims and inquiries, though, won’t solely be about Cardinal McCarrick, said Deacon Bernie Nojadera, executive director of the secretariat.

Deacon Nojadera said the most noticeable such example was following the Boston Globe’s “Spotlight” series examining clergy sex abuse in the Archdiocese of Boston in early 2002. Another such example he gave was the release of the movie “Spotlight,” based on the newspaper’s reportage. In the film’s case, though, he added, abuse reports “weren’t just about clergy sex abuse, but all kinds of abuse.”

Much of this results, he said, “because there’s this invitation (by dioceses) to survivors to please come forward.”

When they do, diocesan victim assistance coordinators realize “you only have one shot” to engage with someone reporting abuse, Deacon Nojadera said.

Deacon Nojadera, in a June 20 interview with Catholic News Service, outlined the difference between “credible” and “substantiated” claims of abuse. Both terms were used in the Archdiocese of New York’s report of the complaint against Cardinal McCarrick in the 1971 incident.

“Credible” means “it could have happened,” Deacon Nojadera said. “There’s truth to this.”

“Substantiated,” though, means “there’s evidence to back this up,” he added. That evidence is born out in a police investigation of the incident, a practice followed by the New York Archdiocese in the complaint against Cardinal McCarrick. “There’s something that points to (the fact) that this, indeed, did happen.”

In his June 20 statement accepting the Vatican’s directive he cease any public ministry, Cardinal McCarrick said he did not recall the incident and “believe(s) in my innocence.”

The incident was 47 years ago. Given all of the reports of abuse that have been filed since 2002 when the scandal in Boston was exposed, it may seem hard to believe that there are those who still had not reported abuse.

“We’ve had people report abuse from the Thirties,” Deacon Nojadera told CNS. Each person who was victimized by abuse gets ready to discuss it at their own time, he added, although for some “that will be a secret they keep with them and go with them to the grave.”

Fear, embarrassment and shame factor into the unwillingness to report abuse. Some victims live “in a small diocese, a small town, where everybody knows everybody,” he said, and are wary of reporting abuse given those circumstances.

Those who do come forward, however, will be treated “with the utmost respect” by those they contact at the diocese, the deacon said. Should there be an influx, most dioceses have forged partnerships with hospitals, mental health professionals and the Catholic Charities agencies in their dioceses to provide services a victim needs.

Just as the diocesan net has widened to offer assistance to victims, the number and kinds of people showing an interest in preventing abuse and rendering aid also has expanded. What used to be known as a “safe environment leader-victim assistance leader” conference has since been rechristened the “Child and Youth Protection Catholic Leadership Conference,” with one held recently in New Orleans, attracting bishops and vicar generals.

Now, with one of the highest-ranking U.S. church officials having been credibly accused of abuse, will the reporting of abuse stop anytime soon?

“I get asked this at conferences,” Deacon Nojadera said. “and I tell them it will stop with the Second Coming.”