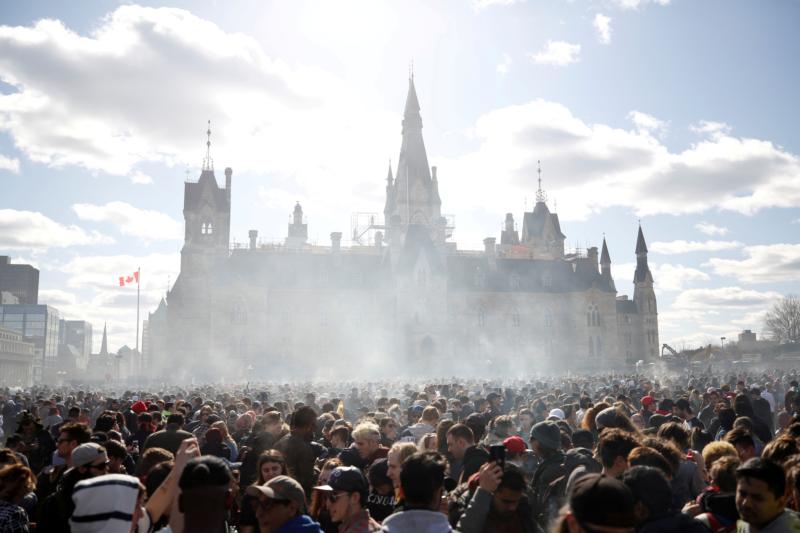 Smoke rises during the annual marijuana rally on Parliament Hill in Ottawa, Ontario, April 20. Msgr. Frank Leo, general secretary of the Canadian Conference of Catholic Bishops, says with the exception of cannabis use for medicinal purposes, consuming marijuana violates the virtue of temperance and should be avoided. (CNS photo/Chris Wattie, Reuters)

With the exception of cannabis use for medicinal purposes, consuming marijuana violates the virtue of temperance and should be avoided, said Msgr. Frank Leo, general secretary of the Canadian Conference of Catholic Bishops.

“The virtue of temperance, as explained in the Catechism of the Catholic Church, ‘disposes us to avoid every kind of excess: the abuse of food, alcohol, tobacco or medicine,'” said Msgr. Leo. “In a particular way, the catechism underscores that the use of any drug, except on strictly therapeutic grounds, is also a ‘grave offense’ — for the use of drugs inflicts very grave damage on human health and life.”

After the Canadian government’s Cannabis Act received royal assent in the Senate June 21, Prime Minister Justin Trudeau announced recreational use of marijuana would cease to be a crime as of Oct. 17. Canada is the second country in the world, following Uruguay, to legalize the drug nationwide.

Under the law, adults can possess up to 30 grams of cannabis, cultivate up to four marijuana plants per household and can use cannabis to prepare edible products. It will be sold in regulated outlets.

Ottawa Archbishop Terrence Prendergast, whose cathedral opens onto a view of Parliament Hill, is not “hailing” the legalization, as are many others.

“Recreational use of substances — whether marijuana, other drugs and opioids — is part of a continuum of consumption of substances that allow people to escape what they regard as the burdens and challenges of life,” said Archbishop Prendergast.

“Bishops, priests, catechists, youth and pastoral care workers will need to give teaching on temperance and how it comes into play in the decisions we take,” he said. “Guidelines for confessors should help them assist penitents with wise guidance in this matter,” he added, comparing it to “addressing other contemporary problems such as the plague of pornography.”

The archbishop stressed that parents play an important role in steering children away from the drug.

“Parents try and discourage their teens from smoking and underage drinking, so how is marijuana use different? They also counsel young adults about overindulging in alcohol, drinking to get drunk or binge drinking.

“Our bodies are ours to use, but we have to account one day to the Lord as to how we took care of them and what we did with them,” he said. “Is it a good idea to knowingly use a substance that produces harmful effects? Is this wise stewardship?”

Both Archbishop Prendergast and Msgr. Leo stressed the serious health effects of marijuana use, especially on the young.

People who are 18 or older can possess 30 grams of dried marijuana for personal use. People 12-18 are prohibited form possessing more than five grams (about 7 to 10 marijuana cigarettes).

In 2017, the Canadian Conference of Catholic Bishops issued a statement on the opioid crisis; it called the intent to legalize marijuana “unwise” and “potentially dangerous.”

“The very significant health risks associated with the use of cannabis are widely recognized, particularly in young people,” the statement said. “They include the heightened risk of heart attack, stroke, all of the respiratory and carcinogenic pathologies associated with tobacco smoke, and a multitude of psychiatric disorders, including schizophrenia.

“Studies have pointed to marijuana as a ‘gateway drug,’ underscoring the propensity of users to consume it in combination with other licit and illicit drugs, including some which may be ‘harder,'” the statement said. “At a time when so many resources are already being spent to discourage recreational tobacco use, it is difficult to comprehend the disregard for public safety entailed in legalizing marijuana, which is arguably much more dangerous.”

The catechism calls the production and trafficking of drugs scandalous practices which “constitute direct cooperation in evil, since they encourage people to practices gravely contrary to the moral law,” Msgr. Leo said. “To this latter point might be added the legalization of drugs for recreational purposes, for this legalization risks being another way to proliferate seriously addictive substances as well as to condone practices which harm individuals and society.”