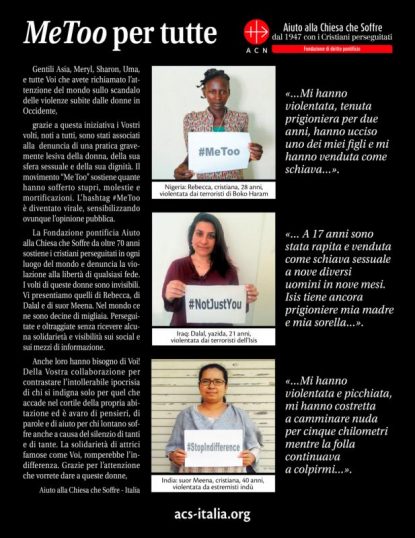 Aid to the Church in Need published this open letter as an ad in the June 6 Italian edition of Vanity Fair. Addressed to Asia Argento, Meryl Streep, Sharon Stone and Uma Thurman, the letter seeks to call their attention to women who have endured sexual and psychological violence because of their faith. (CNS photo/courtesy Aid to the Church in Need)

VATICAN CITY (CNS) — Under the title “#MeToo for All,” Aid to the Church in Need has published an open letter to four famous actresses asking their help in publicizing the widespread sexual exploitation of women because of their faith.

The letter, addressed to Asia Argento, Meryl Streep, Sharon Stone and Uma Thurman, was printed as an ad June 6 in the Italian edition of Vanity Fair. The four women have been leaders in denouncing sexual abuse and harassment in Hollywood.

While the four actresses have been effective in “calling the world’s attention to the sexual molestation women have suffered, particularly in the world of entertainment,” Aid to the Church in Need said it was “intolerable” that little or no attention is given “to the very many women who endure sexual and psychological violence because of their faith.”

Aid to the Church in Need, a Vatican-recognized foundation assisting minority Christian communities and people persecuted for their faith, pleaded with the four actresses to help raise awareness of the thousands of women who are “persecuted and violated without receiving any solidarity or visibility.”

The Vanity Fair ad featured three survivors: Rebecca, a 28-year-old Christian from Nigeria, who was kidnapped, raped and sold as a slave by the Boko Haram terrorist group; Dalal, a 21-year-old Yazidi from Iraq, who was raped as sold as a sex slave by Islamic State terrorists; and Handmaid of Mary Sister Meena Barwa, 40, who was raped by Hindu extremists in India in 2008.

The Italian section of Aid to the Church in Need announced that it has established a special fund to assist women who suffer violence because of their faith.