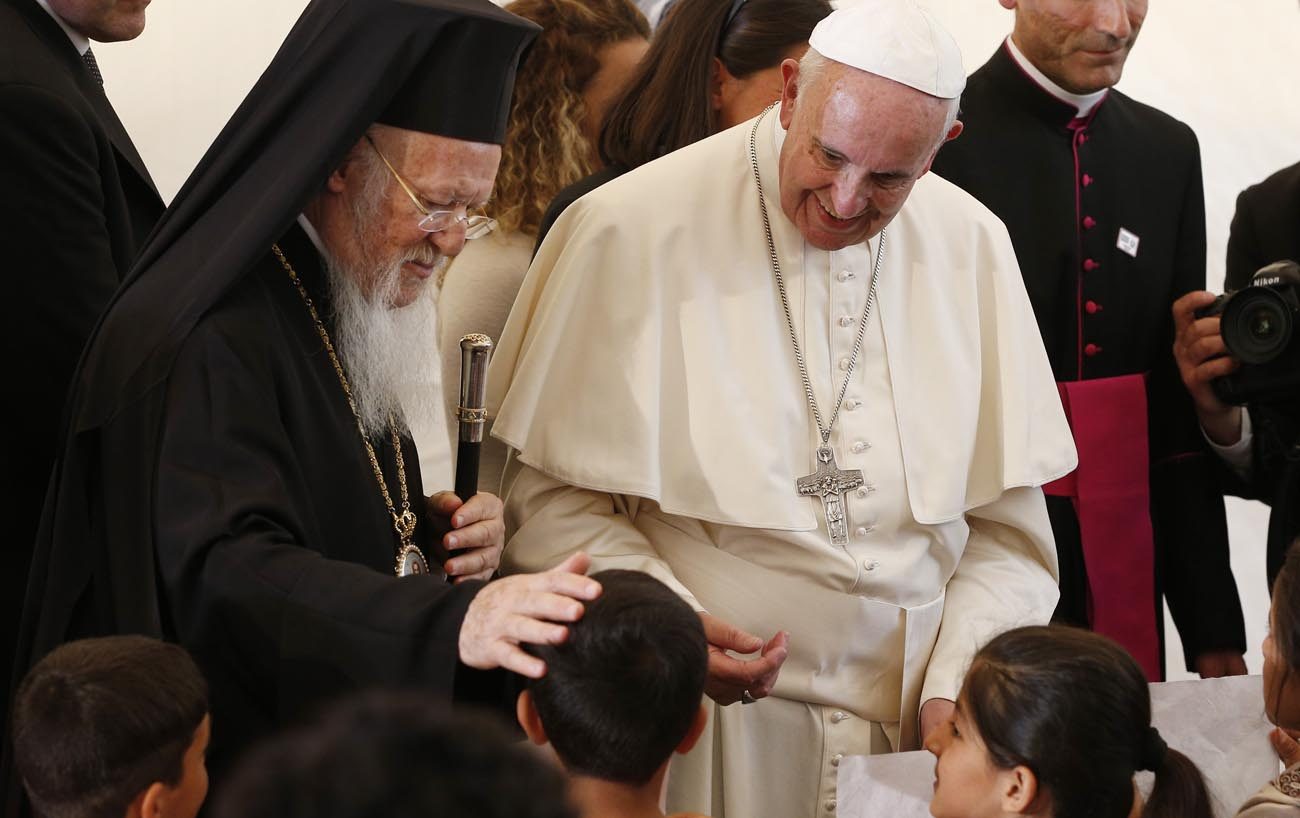 Orthodox Ecumenical Patriarch Bartholomew of Constantinople and Pope Francis meet refugees at the Moria refugee camp on the island of Lesbos, Greece, April 16, 2016. In a recent letter to Patriarch Bartholomew, the pope offered reflections on their visit to Lesbos. (CNS photo/Paul Haring)

VATICAN CITY (CNS) — Pope Francis said that when he was on the Greek island of Lesbos, “while enchanted by the scenery of the blue sky and sea, I was struck by the thought that such a beautiful sea had become a tomb for men, women and children who had for the most part sought only to escape inhumane conditions in their own homelands.”

The pope’s comments came in a letter to Orthodox Ecumenical Patriarch Bartholomew of Constantinople, who had joined the pope in Lesbos in 2016 to draw attention to the plight of the thousands of refugees and migrants living there.

“The dramatic contradictions” between the beauty of the sea and the reality of hundreds of people drowning in it as they sought safety, the pope wrote, show the importance of recognizing the connection between environmental protection and the protection of people, especially the most vulnerable.

Pope Francis sent his message to the patriarch on the occasion of a symposium June 5-8 in Greece, titled “Toward a Greener Attica: Preserving the Planet and Protecting its People.”

Attica refers to the peninsula that includes Athens, the Greek capital. The symposium was part of a series Patriarch Bartholomew has hosted to look at a local ecological situation while also discussing global environmental problems and theological approaches to the care of creation.

The patriarchate said the 2018 symposium was designed to “explore the pressing environmental problems of Greece, examining the connections between ecology and economy, particularly in the context of pressing social and environmental challenges of our time. The symposium will also consider the consequences of forced migration in light of the hospitality extended by the government and people of Greece to refugees from the Middle East and Northern Africa.”

In his message to the patriarch, Pope Francis said, “The ecological crisis now affecting all of humanity is ultimately rooted in the human heart that aspires to control and exploit the limited resources of our planet, while ignoring the vulnerable members of the human family.”

For believers in God the creator, he said, creation must be recognized as “a shared gift and not as a private possession,” and protecting it “always entails the recognition and the respect of the rights of every person and every people.”

The root of the ecological crisis, the pope said, is “ultimately rooted in the human heart that aspires to control and exploit the limited resources of our planet, while ignoring the vulnerable members of the human family.”

“It is not just the homes of vulnerable people around the world that are crumbling, as can be seen in the world’s growing exodus of climate migrants and environmental refugees,” the pope said. “As I sought to point out in my encyclical ‘Laudato Si’,’ we may well be condemning future generations to a common home left in ruins.”

Pope Francis told the patriarch he hopes “Catholics and Orthodox, together with the faithful of other Christian communities and all people of goodwill, may actively work together in local contexts for the care of creation and for a sustainable and integral development.”

NEXT: Church in Congo suspends sacraments during Ebola outbreak