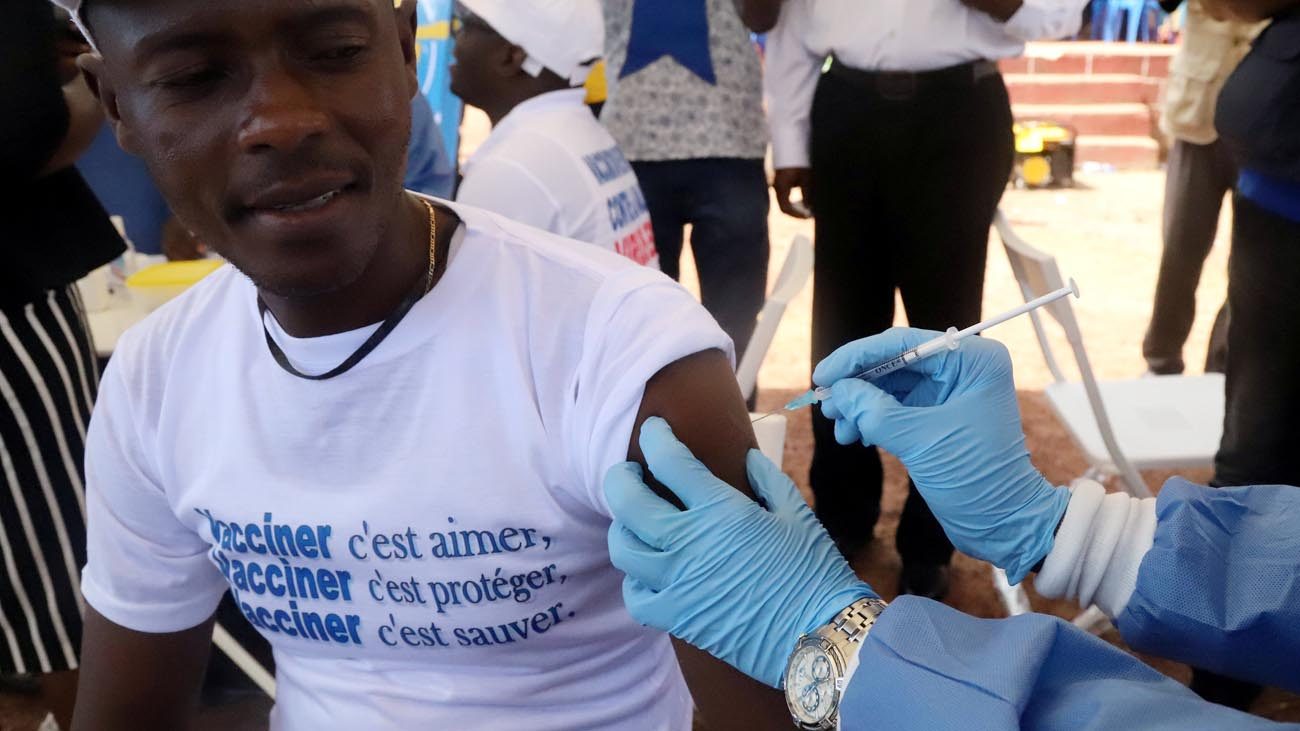 A World Health Organization worker administers a vaccination May 21 during the launch of a campaign aimed at beating an outbreak of Ebola in Mbandaka, Congo. (CNS photo/Kenny Katombe, Reuters)

OXFORD, England (CNS) — The Catholic Church in Congo said emergency measures will remain indefinitely in place in parishes at risk of Ebola, and urged effective action against the disease by the government of President Joseph Kabila.

“Although Masses are continuing, sacraments such as baptism and confirmation have had to be suspended,” said Msgr. Jean-Marie Bomengola, secretary of the church’s Social Communications Commission.

“Since we can’t foresee how the disease will develop, we can’t set out any timescale. But the crisis needs real containment measures, and we’re counting on the government to provide them,” he said.

Health care workers toiled to head off a feared epidemic in the Equateur province in northwest Congo, where at least 25 people have died of the almost-always fatal disease.

Msgr. Bomengola told Catholic News Service June 7 that at least 1,000 people had been vaccinated and that measures were in place to prevent “any personal contact” among Catholics.

“All precautions are being taken to ensure people don’t come too close. It’s a highly abnormal situation,” he said.

“The church provides a key framework for communication and cooperation, and is at the very center of events, mobilizing preventive initiatives and providing transport and medical care,” he added.

UNICEF said June 5 that nearly 300,000 people had been screened since the Ebola outbreak was confirmed May 8 by the World Health Organization.

Archbishop Fridolin Ambongo Besungu, co-adjutor archbishop of Kinshasa who previously served in the Diocese of Mbandaka-Bikoro, where the outbreak occurred, decided to suspend administering sacraments to protect churchgoers from contracting the disease.

He said the ban would extend to anointing the sick, exchanging the sign of peace and other acts involving physical contact, adding that a June 3 ordination Mass also had been canceled.

The archbishop added that clergy would dispense Communion to hands rather than mouths and would ensure sacred objects were disinfected before and after every Mass.

The Ebola outbreak coincides with political tension in Congo over preparations for long-postponed December elections as well as violence by armed groups in several provinces.

Msgr. Bomengola told CNS Ebola had “made everything more difficult for the population,” adding that there were fears the disease could spread down the Congo River from the trading hub of Mbandaka to Kinshasa, a city of 10 million.

“We’re trying to instill a calm hope for better things, to maintain the faith and prevent despair,” he said.

“But we also rely on the government to take every effective step to end insecurity and stop this disease. Despite all the anger and hostility around us, normal life has to continue.”