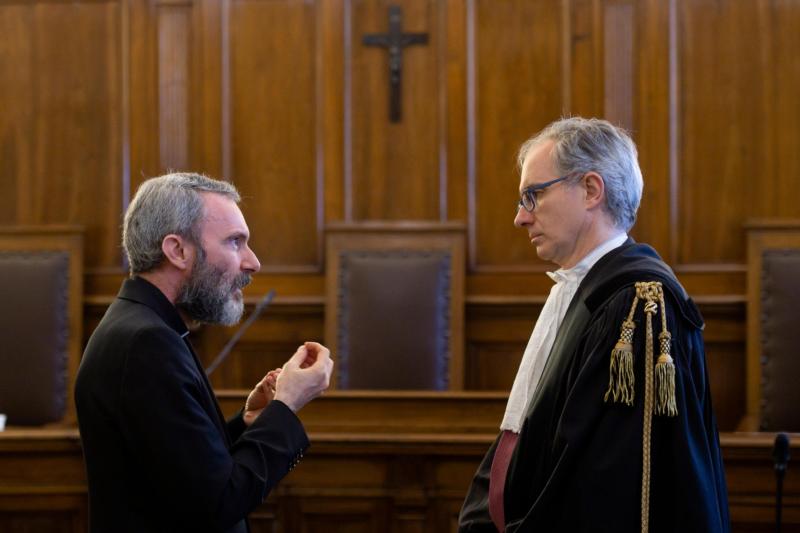 Msgr. Carlo Alberto Capella, left, a former Vatican diplomat who served in Washington, talks to his lawyer during his sentencing in a Vatican court June 23. Msgr. Capella was found guilty of possessing and distributing child pornography and sentenced to five years in a Vatican prison and fined 5,000 Euro. (CNS photo/Vatican Media)

Judge Giuseppe Della Torre, head of the tribunal of the Vatican City State, delivered the verdict June 23, and sentenced Msgr. Capella to five years in prison and fined him 5,000 euro ($5,833).

The Vatican press office said he would serve his sentence in a Vatican cell located in the building of the Gendarme Corps of Vatican City State, as the Vatican police force is formally known.

It is presumed to be the same cell prepared for Paolo Gabriele, the former papal butler who leaked reserved papal correspondence in 2012, and Msgr. Lucio Vallejo Balda, former secretary of the Prefecture for the Economic Affairs of the Holy See, who was found guilty of leaking confidential documents about the Vatican’s financial reform in 2016.

Both Gabriele and Vallejo Balda were pardoned after serving a few months of their sentences.

Msgr. Capella was accused of having and exchanging with others “a large quantity” of child pornography; the quantity is such that the charges are considered “aggravated” by the Vatican City court.

Prior to verdict, the judges presiding over the case listened to Vatican prosecutor Roberto Zanotti who recommended the court sentence the Italian prelate to five years and nine months and fine him 10,000 euro ($11,668).

Roberto Borgogno, Msgr. Capella’s lawyer, pleaded with the court to give the monsignor a reduced sentence and referred to his client’s crimes as “a problem” that required intense therapy and not a heavy sentence.

Before adjourning in the morning, Msgr. Capella addressed the court, saying that the “mistakes I have made are evident as well as this period of weakness. I am sorry that my weakness has hurt the church, the Holy See and my diocese. I also hurt my family and I am repentant.”

Referring to his possession and distribution of child pornography as “a bump in the road in my priestly life,” the former Vatican diplomat said that he wants to continue receiving “psychological support.”

The Vatican press office said a decision regarding Msgr. Capella by the Congregation for the Doctrine of Faith would be made at a later date. The congregation’s investigations of clerical sexual abuse cases is separate from how those cases are handled by criminal courts.

The U.S. State Department notified the Holy See Aug. 21 of Msgr. Capella’s possible violation of laws relating to child pornography images. The 50-year-old Italian monsignor had been working in Washington just over a year when he was recalled to the Vatican.

On Sept. 28, police in Canada issued a nationwide arrest warrant for Msgr. Capella on charges of accessing, possessing and distributing child pornography.

PREVIOUS: Pope: Bishops, clergy in Middle East must not fall into sin of opulence

NEXT: Pope Francis: Support life at all stages, avoid ‘dirty work of death’