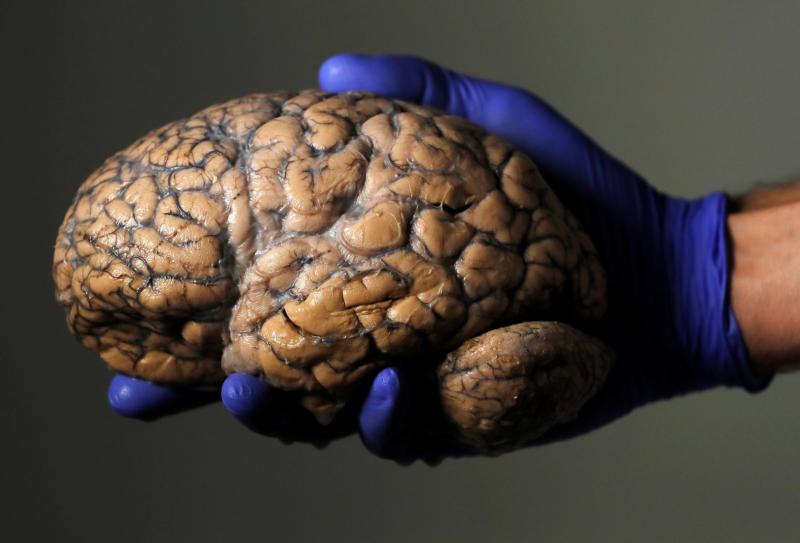 A Belgian researcher holds a human brain as part of a study into psychiatric diseases July 19, 2017. Pope Francis told members of the Pontifical Academy for Life June 25 that behind the indifference toward human life lies a contagious illness that blinds people to the lives, challenges and struggles of others. (CNS photo/Yves Herman, Reuters)

VATICAN CITY (CNS) — Behind the indifference toward human life lies a contagious illness that blinds people to the lives, challenges and struggles of others, Pope Francis said.

Like the mythical figure Narcissus, people risk becoming infected by a “contagious spiritual virus” that turns them into “mirrored men and women who only see themselves and nothing else,” the pope said June 25 to members of the Pontifical Academy for Life.

“Evil looks to persuade us that death is the end of all things, that we have come to the world by chance and that we are destined to end in nothingness. By excluding the other from our horizon, life withdraws in itself and becomes just a good to be consumed,” he said.

The Pontifical Academy for Life began its June 25-27 general assembly, reflecting on the theme “Equal beginnings, but then? A global responsibility.”

The pope told members that the “ethical and spiritual quality of life in all its phases” must inspire the church’s “behavior toward human ecology.”

He also said that life from conception, childhood, adolescence, adulthood, old age, as well in those moments when it is “fragile and sick, wounded, offended, demoralized, marginalized and those cast aside” is “always human life.”

“When we surrender children to deprivation, the poor to hunger, the persecuted to war, the elderly to abandonment, we are not doing our own work but rather the dirty work of death. And where does the ‘dirty work’ of death come from? It comes from sin,” he said.

Speaking to journalists after the pope’s speech, Archbishop Vincenzo Paglia, president of the Pontifical Academy for Life, said it was the first time the pope used the phrase “dirty work of death” to describe issues that threaten the sanctity and dignity of human life.

“The dirty work of death means all areas — even legislative decisions — in which life isn’t helped but rather weakened, hindered, not helped and not supported in all its forms,” Archbishop Paglia said.

“In this sense, the pope exhorts us to do, in every way possible, the beautiful work of life and not be like Pontius Pilate, who washes his hand and allow the dirty of work of death to cast innocents aside,” he added.

Pope Francis also highlighted the need for “a global vision of bioethics” inspired by Christian thought, in which the value of one’s life is not determined by sickness and death but by the “profound conviction of the irrevocable dignity of the human person.”

Citing his 2015 encyclical, “Laudato Si’, on Care for Our Common Home,” the pope called for a “holistic vision of the person” and the importance of articulating clearly the universal human condition “beginning from our body.”

“Our body itself establishes us in a direct relationship with the environment and with other living beings. The acceptance of our bodies as God’s gift is vital for welcoming and accepting the entire world as a gift from the Father and our common home, whereas thinking that we enjoy absolute power over our own bodies turns, often subtly, into thinking that we enjoy absolute power over creation,” the pope said.

Encouraging the Pontifical Academy for Life’s work in promoting a culture of life in the field of bioethics, Pope Francis said that this culture must always look toward “the final destination” where every person is called to be in communion with God.

“To recognize and appreciate this faithfulness and dedication to life raises gratitude and responsibility in us and encourages us to generously offer our knowledge and experience to the whole human community,” the pope said.

NEXT: Some Philippine bishops react after Duterte calls God ‘stupid’