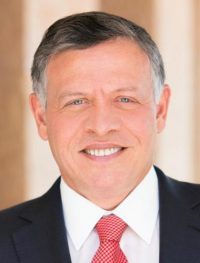 He has “done more to seek religious harmony within Islam and between Islam and other religions than any other living political leader,” said a June 27 announcement on the award released by the John Templeton Foundation in West Conshohocken.

The Templeton Prize, established in 1972 by Sir John Templeton, aims to recognize someone “who has made an exceptional contribution to affirming life’s spiritual dimension, whether through insight, discovery, or practical works.”

King Abdullah will be formally awarded the Templeton Prize at a ceremony in Washington Nov. 13. The price has a monetary value of about $1.45 million.

Jordan’s leader was recognized for his work to promote a peaceful Islam and bring an end to religious violence in the Middle East.

After ascending to the throne of Jordan upon the 1999 death of his father, King Hussein, King Abdullah has aggressively prodded Islamic leaders toward a uniform message reflecting the moderate beliefs of the vast majority of Muslims, as an antidote to the Islamic extremism associated with terrorism.

King Abdullah also has funded the “A Common Word Between Us and You” initiative, which aims to promote understanding between Christian and Muslim communities, and proposed a U.N. World Interfaith Harmony Week aimed at understanding the values of peace in all religions. The proposal was unanimously accepted by the U.N. General Assembly.

In addition to this work, King Abdullah also has protected some of the most important religious sites in Jerusalem. The dynasty of which he has been a part has been the custodian of the Temple Mount since 1924, and in 2016 the king used his own money to assist in restoring the Church of the Holy Sepulchre. He also has supported legislation to restore and develop the site of the baptism of Jesus and given various Christians blocks of land to build churches there.

In his videotaped acceptance of the Templeton Prize, King Abdullah said “Our world needs to confront challenges to our shared humanity and values. And this is why I feel it is so urgent to promote tolerance and mutual respect, support inclusion and hope, speak out against Islamophobia and other wrongs, and make our values a real force in the daily life of the modern world.”

Heather Templeton Dill, president of the John Templeton Foundation, noted in a statement that “Sir John created the Templeton Prize when he realized that many of his friends and colleagues thought of religion as uninteresting and old-fashioned, or perhaps even obsolete.”

“He decided that a prize to single out people who were responsible for, in his words, the ‘marvelous new things going on in religion,’ would help them become more well known, not so much for their own benefit, but for the benefit of people who might be inspired by them,” she added.

King Abdullah joins a group of 47 recipients of the Templeton Prize recipients including Mother Teresa, who received the inaugural award in 1973; the Dalai Lama, 2012; Archbishop Desmond Tutu, 2013; and Jean Vanier, founder of L’Arche, 2015.

PREVIOUS: Life in Central America so bad that migrants risk trek to U.S.