Life in Central America so bad that migrants risk trek to U.S. 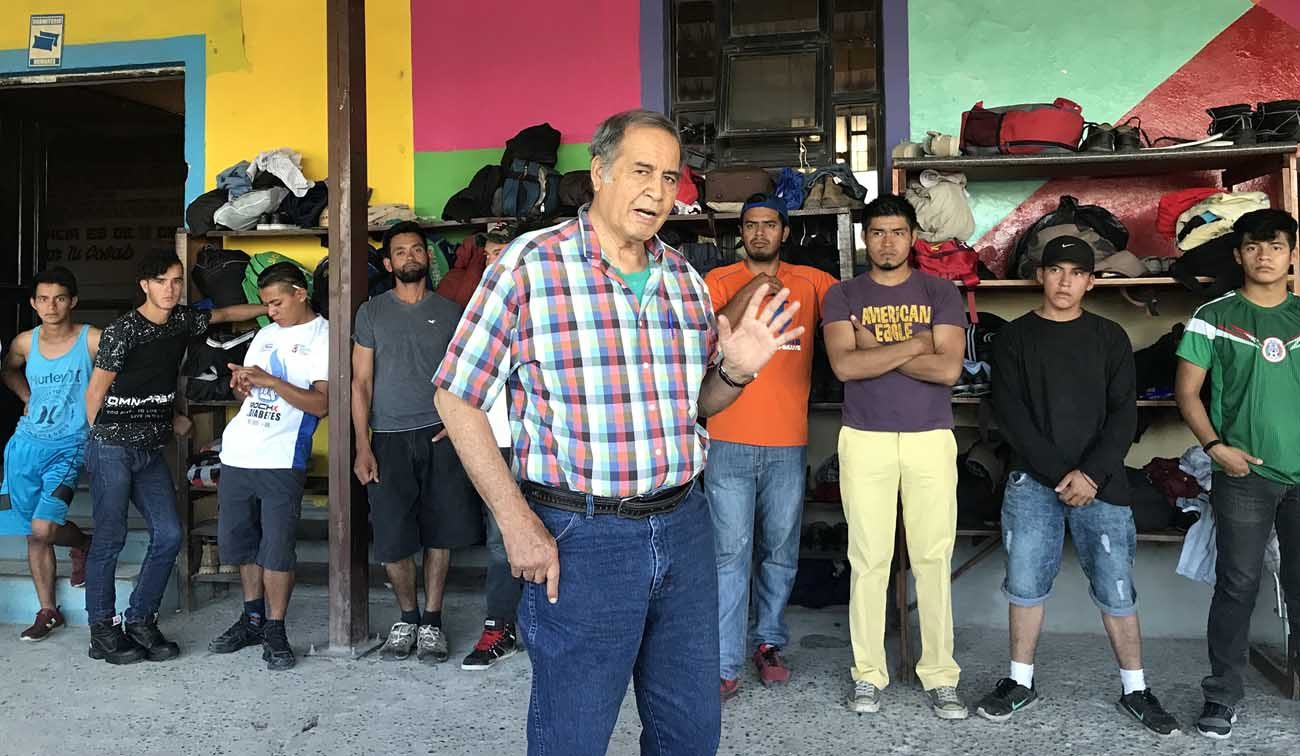 Father Pedro Pantoja, founder of the Saltillo migrant shelter, speaks to guests before dinner June 23. Some of the Central American migrants said they would stay in Mexico and not travel to the United States. (CNS photo/David Agren)

GUADALUPE, Mexico (CNS) — Honduran migrant Selvin Meza Garcia did not want to work as a “tax collector.” Gangs in the Central American country collect “war taxes” — a euphemism for extortion — from ordinary people and force young men like him to collect it, often at gunpoint and with threats of violence for nonpayment.

“If someone doesn’t accept their offer to work for them, they have to flee,” Meza, a coffee farmer, said from the Catholic-run Casanicolas shelter in suburban Monterrey. Former classmates from school, he added, delivered the offer, telling him, “We’re going to keep after you,” and that turning them down meant, “You have to pay the war tax.”

U.S. authorities have beefed up border enforcement, tried to make asylum claims tougher to pursue and separated children from the families as they enter the country.

Yet even as the heart-wrenching scenes of families being separated at the border captures headlines — a policy suspended by the U.S. government — migrants continue abandoning Central America, where they flee violence, poverty and, increasingly, farms afflicted by the consequences of climate change.

While traveling through Mexico migrants risk extortion, robbery and rape. The shelter in Monterrey offers migrants one last stop before their final pushes to the Texas border — some 150 miles from Laredo — through the violent state of Tamaulipas, where drug cartels often kidnap them for ransom.

The tougher U.S. policies and the president’s terse statements fail to dissuade many young men. Staff at the shelters in Guadalupe and Saltillo, 65 miles west, however, suspect that families — who often don’t stay in their facilities as they are able raise money to pay a human smuggler or can obtain a humanitarian visa to transit Mexico — are unwilling to take the risk of being separated at the border.

“Migrants come, risking their lives, knowing that not all make it,” said Nelly Morales, director of the Casanicolas shelter, which belongs to St. Francis Xavier Parish.

The number of families apprehended also have surged with nearly 9,500 detentions in May, almost double the figure recorded in October.

“If one person in the family is extorted or targeted and that person leaves, then they (criminals) go after the other persons in the family,” said Rick Jones, who works with Catholic Relief Services in El Salvador. “People are trying to save their little kids, and the whole family has to leave.”

Mexico regularly detains and deports thousands of Central Americans as they transit the country in attempts to reach the United States. Mexican immigration officials do not separate families, but the country’s tough posture toward Central Americans does not sit well with some Catholic leaders.

“The first thing we have to fix is this being a shield so that immigration” doesn’t continue through Mexico, said Bishop Raul Vera Lopez of Saltillo. “In this we are accomplices of the U.S. government … because the mistreatment of migrants started here.”

“From the southern border (with Guatemala) and to the (U.S. border) is where the United States’ national security starts,” he added.

Mexico toughened its crackdown on Central American migrants in 2014, after an outflow of unaccompanied minors from Central America. It set up immigration checkpoints across southern states, improved border infrastructure and tried to stop migrants from riding the rails — something many migrants at the Guadalupe and Monterrey shelters said they did, though they were at times forced off by police or security guards and robbed.

“That made them take new routes, (so) they had many more aggressions against them,” said Sister Guadalupe Arguello, a staff member in the diocesan shelter in Saltillo. “This gave organized crime the opportunity to take advantage of them even more.”

The Mexican policies, along with the continuing toughening of the U.S. border, has allowed “smugglers to charge them much more,” Sister Arguello said. “It’s now between $8,000 and 10,000 dollars” to hire a smuggler to travel from Central America to the United States, she said.

Many of the guests at the shelters in Guadalupe and Saltillo await support from relatives to pay a smuggler to take them to the U.S. border and points beyond. Some work odd jobs to save money and pay the smugglers’ fees.

Guatemalan migrant Miguel Angel Cordon, 42, traveled to the border, expecting a relative in Houston send money — but it never arrived. Condon said he made good money installing computer equipment and telephones back home, but fled Guatemala after his son and brother were murdered in 2015 and he received death threats, which he attributes to a property dispute involving a powerful public official.

Many more migrants are seeking asylum in Mexico, but Cordon seemed unenthused. “With the Mexican economy as it is, I can’t help my daughter. In the United States, I could.”