Migration is about people, not numbers, pope says 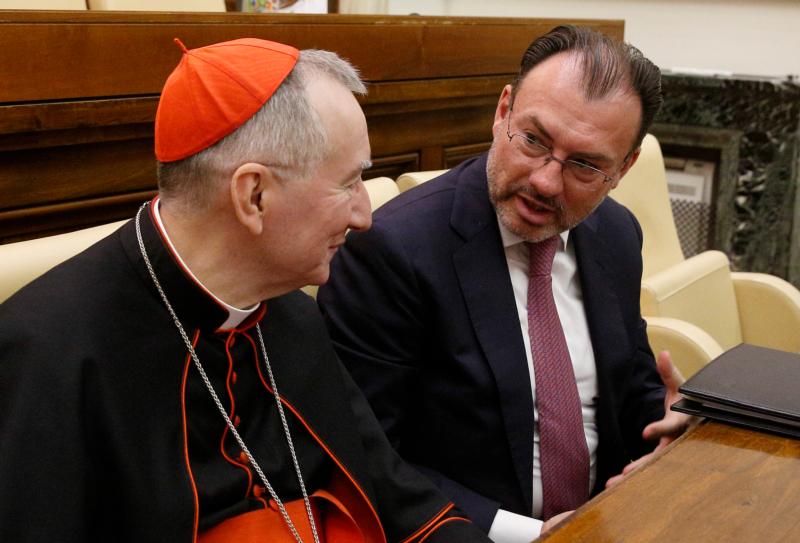 Cardinal Pietro Parolin, Vatican secretary of state, talks with Luis Videgaray Caso, Mexico’s secretary of foreign affairs, during a conference on international migration at the Vatican June 14. The conference was sponsored by the Vatican and Mexico. (CNS photo/Paul Haring)

VATICAN CITY (CNS) — Migrants seeking a better life in other countries must not be viewed with suspicion but rather defended and protected, no matter their status, Pope Francis said.

International cooperation is needed “at every stage of migration,” especially for countries where higher influx of migrants “often exceeds the resources of many states,” the pope said June 14 in a message to participants of the Holy See-Mexico Conference on International Migration at the Casina Pio IV, a villa located in the Vatican Gardens.

“I would like to point out that the issue of migration is not simply one of numbers, but of people, each with his or her own history, culture, feelings and aspirations. These people, our brothers and sisters, need ongoing protection, independently of what migrant status they may have,” he said in the message read by Archbishop Paul R. Gallagher, Vatican foreign minister.

Thanking participants for their work “on behalf of the needy and the marginalized in our society,” the pope said the current challenges in confronting the migration crisis “demand a change in mindset.”

“We must move from considering others as threats to our comfort to valuing them as persons whose life experience and values can contribute greatly to the enrichment of our society,” he said.

He also called on the international community to defend the rights of migrant children and their families who are “victims of human trafficking rings and those displaced due to conflicts, natural disasters and persecution.”

“All of them hope that we will have the courage to tear down the wall of ‘comfortable and silent complicity’ that worsens their helplessness; they are waiting for us to show them concern, compassion and devotion,” he said.

In his address at the conference, Cardinal Parolin said that while most U.N. member states are continuing “paths of dialogue and negotiation” on the protection of migrants and refugees, the changing political climate “has made the issue more complex.”

The steps taken so far, he added, can hopefully “reverse the logic of the globalization of indifference, replacing it with the globalization of solidarity that attends to the needs and the just expectations of people and know how to help those in the human family who find themselves in need and in situations of vulnerability.”

However, the cardinal also said that people’s rights to live in their land must also be protected to “avoid the flow of uncontrolled migration.”

Among the concerns raised by Videgaray was the anti-migration efforts taken by the U.S. government, including the separation of families and the Trump administration’s decision to abandon the U.N. Global Compact for Migration, an agreement that sought to improve the global flow of migration and refugees.

Although dismayed by the U.S. government’s decision “to abandon the conversation,” Videgaray said Mexico remained “undeterred” in its commitment to protect the rights and dignity of migrants.

He also expressed concerns regarding the separation of families, saying “there are 2,000 cases of children separated from their parents” in the United States.

“We understand the legal foundation of this action. However, we cannot agree to actions of this nature,” he said.

After the conference’s first session, Cardinal Parolin told journalists that the Vatican shared Mexico’s concerns regarding policies that are “violations of rights of peoples and families.”

“Unfortunately, the general atmosphere isn’t the most positive, and that is why I insisted on a change of image regarding migration; from a solely negative image to a positive image.”

Regarding the United States’ decision to exit the Global Compact for Migration, Cardinal Parolin told journalists that “it wasn’t good” and that “everyone must participate” in finding a solution to the migration crisis.

The issue of migration, he said, is a challenge that the international community cannot afford to ignore.

“It is a problem, or rather a global phenomenon, that needs everyone’s participation. Nobody can turn their back,” Cardinal Parolin said.

PREVIOUS: Q and A with Bangladeshi human rights activist on clergy sexual abuse