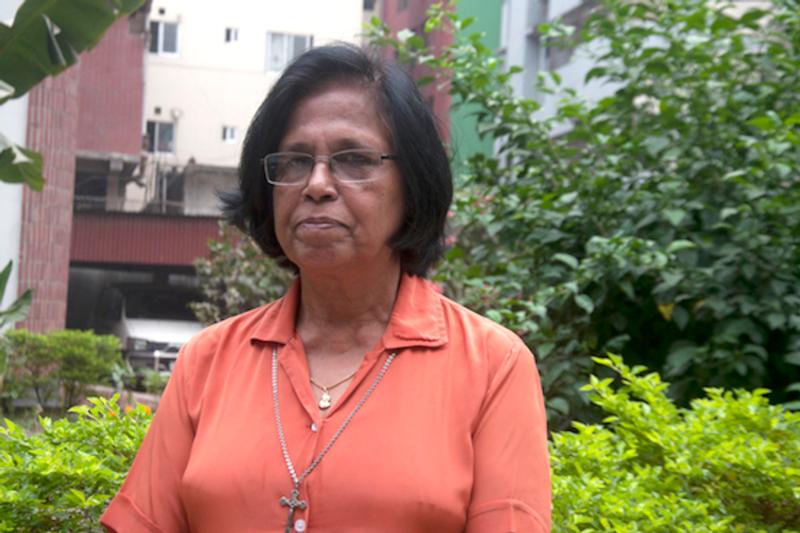 Rosaline Costa is seen in this undated photo. She is a Catholic rights activist, former nun and former executive director of the Dhaka-based Hotline Human Rights Trust in Bangladesh. (CNS photo/courtesy Stephan Uttom via ucanews.com)

“In recent years, the media has been very open in this respect, and so many victims are coming out and even risking their lives with their claims,” Costa said.

Q: How would you assess the behavior of clergy in Bangladesh?

A: The Catholic Church of Bangladesh is a very tiny one, and the church or Christians are still honored and accepted for their truthfulness, honesty, dedication and services they offer to people irrespective of class, faith or gender. Immorality among the clergy gives a very negative message to the ordinary people of other faiths. Today people are more aware about other religions. When immorality is found among the clergy and the message goes to everyone via social media, it will have a long-term negative impact on the whole Christian society.

Q: How widespread is the abuse of minors by priests?

A: I know of many who are engaged in such immorality but, in most cases, bishops and vicars suppress it in order to protect the accused. It is very rare for children to open their mouths as they don’t realize in most cases what has happened to them.

Girls are asked to keep quiet by perpetrators and sometimes the clergy rewards them with foreign trips or financial help. In most cases, young girls from poor families become the prey of these immoral clergymen. I know a foreign priest who used to help poor girls through education. Girls who are very needy offer their bodies as demanded.

Q: Why and how do women, girls and boys fall prey to seduction by priests in Bangladesh?

A: Poverty is the main factor for young girls. I know some women fall prey to immoral priests for money and/or foreign tours. They can keep it secret from their husbands and parents by saying that they have been invited to conferences.

Young girls need help with their studies. Their parents cannot afford to pay their education expenses, and sometimes the parents ask for help from clergymen, who can ask the parents to send their daughter to him. In the beginning the accused clergyman caresses the victim and very slowly tempts her to commit immoral acts. The victim in this case gets money and other help whenever needed.

Q: What happens when any complaint is placed with higher authorities in the church?

A: I have dealt with cases where the higher authorities were informed but without any result. The higher authorities always excused the abusers and tried to protect them. At the same time, in some cases, the accused clergyman was removed from his mission and taken to the cathedral or sent to another country for studies or for mental treatment.

In some cases, the accused was transferred to another mission or taken to their main house (mother/provincial house) with a different mission in order to keep him far from the victims and ordinary people.

Q: Are you concerned that the Catholic Church in Bangladesh and Asia is waiting to explode with scandalous stories of abuse as happened in Europe, the Americas and Australia?

A: I presume we are heading that way. The media and mostly social media are playing a very powerful role in the life of everyone, especially among the educated or semi-educated people, including in the villages.

I know many Catholics who do not go to church when a particular clergyman is taking Mass. Many people don’t receive holy Communion from priests who have illegitimate and immoral relations with women and girls.

I don’t think Bangladesh’s Catholic community is too far from those of Europe, America or Australia. When things are disclosed, it will be like a bomb or thunderstorm.

Q: What should be done to punish those priests violating priestly vows if no victim files a criminal case?

A: I doubt if there will be any punishment of those involved in immoral acts in our Catholic Church. I hold very little hope that there are many who can say with hands crossed on their chests that they are innocent if they examine their conscience.

When children were sexually abused and I tried to get legal help from the Justice Department, neither police nor attorneys were willing to take up the case. Penal Code No 377 allows filing a complaint for “unnatural offenses,” but up to now no such case has been lodged in Bangladesh. I tried to file cases under this section but got no help from any part of the judicial system.

Q: What role should the church take?

A: Higher authorities should punish clergymen instead of suppressing the acts and protecting abusers. If not legal action, at least they should be sent out of their ministry.

Q: What kind of compensation and rehabilitation should abuse victims get from the church?

A: Rehabilitation and compensation for victims should be appropriate and just. Victims, especially underage girls, suffer trauma and need to be cured in mind and body. They need long-term counseling and proper treatment. Bangladesh society is still far from that of India, where victims tell their stories of sexual abuse to others.

There should be trained people, especially from among women or nuns. It is a very delicate issue and should be handled delicately.

Victims should be given free education and treatment and their families should be compensated justly with finance. Abusive priests or clergymen should never be brought before victims.

Pope Francis is apologizing for not admitting the sexual crimes of clergymen in Chile. Canada is inviting Pope Francis to apologize in public for the sexual abuses of clergymen there. In Australia, a cardinal is facing trial for abusive acts. Indian authorities put an abusive priest in jail.

Can we expect that such things will happen in Bangladesh? Will our Bangladesh cardinal be so sensitive along with his bishops to ask for an apology for all the abusive and sexual sins committed by their priests? Are they ready to accept reality?

NEXT: Migration is about people, not numbers, pope says