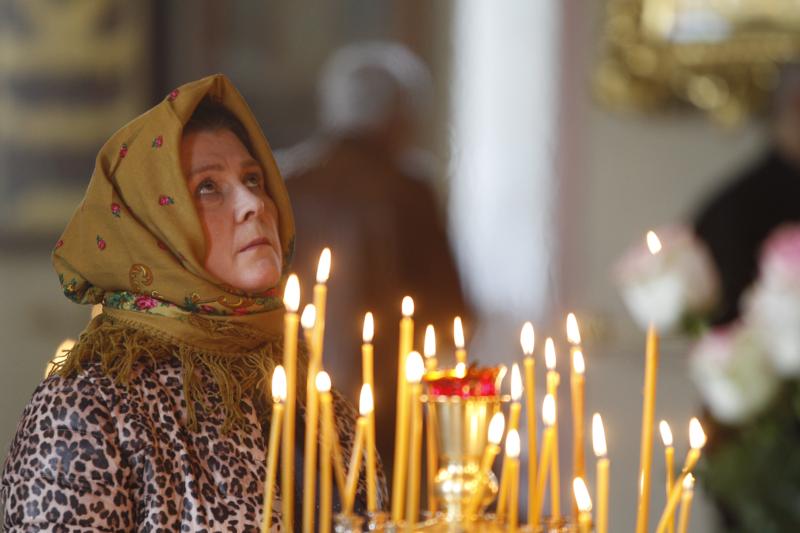 A Russian Orthodox woman prays while gazing at an icon in an Orthodox parish in St. Petersburg, Russia, in 2017. The Catholic Church respects the Russian Orthodox Church, its status in Russia and its right to handle its own internal affairs, Pope Francis said. (CNS photo/Robert Duncan)

VATICAN CITY (CNS) — The Catholic Church respects the Russian Orthodox Church, its status in Russia and its right to handle its own internal affairs, Pope Francis said.

Pope Francis met May 30 with a delegation from the Russian Orthodox Church led by Metropolitan Hilarion of Volokolamsk, head of external relations for the church. The Vatican published the pope’s remarks to the group June 2.

“The Catholic Church, the Catholic churches must not meddle in the internal affairs of the Russian Orthodox Church nor in political questions,” the pope said. “This is my attitude and the attitude of the Holy See today. And those who meddle are not obeying the Holy See.”

“In Moscow, in Russia, there is only one patriarchate — yours,” he said. “We will never have another.”

A statement April 25 from the office of Archbishop Sviatoslav Shevchuk, head of the Ukrainian Catholic Church, said the Eastern Catholic community sees the request as something “positive, but it is not participating and is not involved in this process because it is an internal affair of the Orthodox churches.”

Still, the statement said, “The Ukrainian Greek Catholic Church considers this process an important step toward overcoming the divisions among the Ukrainian Orthodox churches and their isolation in the Orthodox world.”

NEXT: Vatican asks German bishops to set aside plans for eucharistic sharing