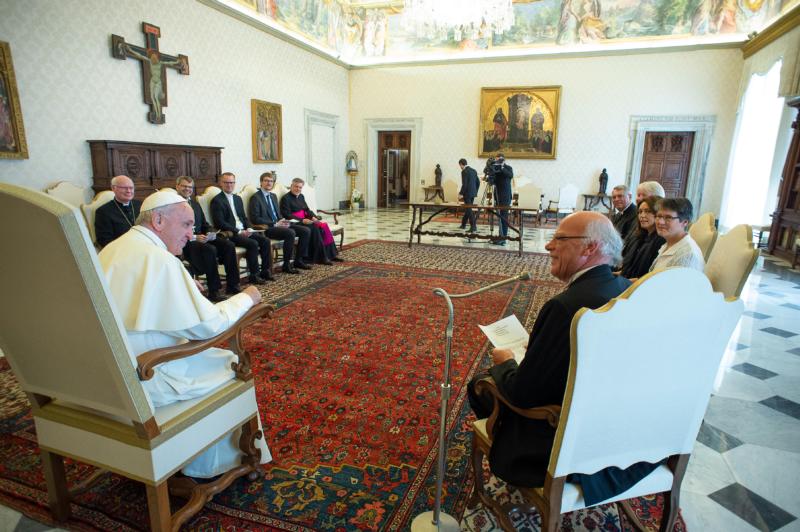 Pope Francis meets with a delegation from the Evangelical Lutheran Church of Germany at the Vatican June 4. The pope urged patient progress in ecumenical dialogue. The same day, the Vatican confirmed the pope had asked Germany’s Catholic bishops not to publish guidelines that would relax restrictions on when Protestants married to Catholics could receive Communion. (CNS/ photo/Vatican Media)

UPDATED – VATICAN CITY (CNS) — Pope Francis has asked the Catholic bishops’ conference of Germany not to publish nationwide guidelines for allowing Protestants married to Catholics to receive Communion at Mass, but to continue having diocesan bishops judge specific situations.

Greg Burke, director of the Vatican press office, confirmed the authenticity of a letter published June 4 on the Italian blog “Settimo Cielo.”

“The Holy Father has reached the conclusion that the document has not matured enough to be published,” said the letter signed by Cardinal-designate Luis Ladaria, prefect of the Congregation for the Doctrine of the Faith.

A Vatican statement issued at the end of the meeting said, “Pope Francis appreciates the ecumenical commitment of the German bishops and asks them to find, in a spirit of ecclesial communion, a result as unanimously as possible.”

Cardinal-designate Ladaria’s letter said he spoke to Pope Francis specifically about the proposed guidelines and the early May meeting on two occasions and mentioned how the Germans’ proposal raises “a series of problems of notable importance.”

— “The question of the admission to Communion of Lutheran Christians in interconfessional marriages is a theme that touches on the faith of the church and has relevance for the universal church.”

— “Such a question has effects on ecumenical relations with other churches and other ecclesial communities that cannot be undervalued.”

— The matter also involves church law, particularly the interpretation of canon 844 of the Code of Canon Law, which says: “If the danger of death is present or if, in the judgment of the diocesan bishop or conference of bishops, some other grave necessity urges it, Catholic ministers administer these same sacraments licitly also to other Christians not having full communion with the Catholic Church, who cannot approach a minister of their own community and who seek such on their own accord, provided that they manifest Catholic faith in respect to these sacraments and are properly disposed.”

The text of the German guidelines was never made public, but it was widely assumed to foresee situations in which a Lutheran married to a Roman Catholic and regularly attending Mass with the Catholic spouse could receive the Eucharist on a regular basis. Already in many dioceses around the world, bishops permit such eucharistic hospitality on special occasions like the baptism or first Communion of their child.

Cardinal-designate Ladaria’s letter said because of varying interpretations of the canon, “the competent dicasteries of the Holy See already have been charged with producing a timely clarification of such questions on the level of the universal church.”

“In particular,” he said, “it appears opportune to leave to the diocesan bishop the judgment about the existence of a ‘grave necessity'” that would permit Christians of other denominations to receive the Eucharist at a Catholic Mass.

Given the pope’s early May encouragement to try to find a unanimous position, Kopp said in a statement, the cardinal “is therefore surprised” by the doctrinal congregation’s letter.

Cardinal Marx, he said, will need to discuss the letter with the other German bishops and, eventually, he hopes also to discuss it with Vatican officials and Pope Francis himself.

The same day the letter was leaked, Pope Francis met at the Vatican with a delegation from the Evangelical Lutheran Church of Germany.

“Let us support one another in the journey, including by continuing the theological dialogue,” the pope told them.

“No ecumenical dialogue can advance if we remain stationary,” the pope said. “We must walk, progress — not impetuously running ahead to reach a hoped-for finishing line, but walking together with patience under the gaze of God.”

Certain themes, including “the church, the Eucharist and ecclesial ministry,” require deeper study and dialogue, he said. At the same time, ecumenism is not “elitist,” but must “involve as much as possible many brothers and sisters in the faith, growing as a community of disciples who pray, love and proclaim.”

NEXT: Pope to journalists: Be responsible, avoid ideological warfare