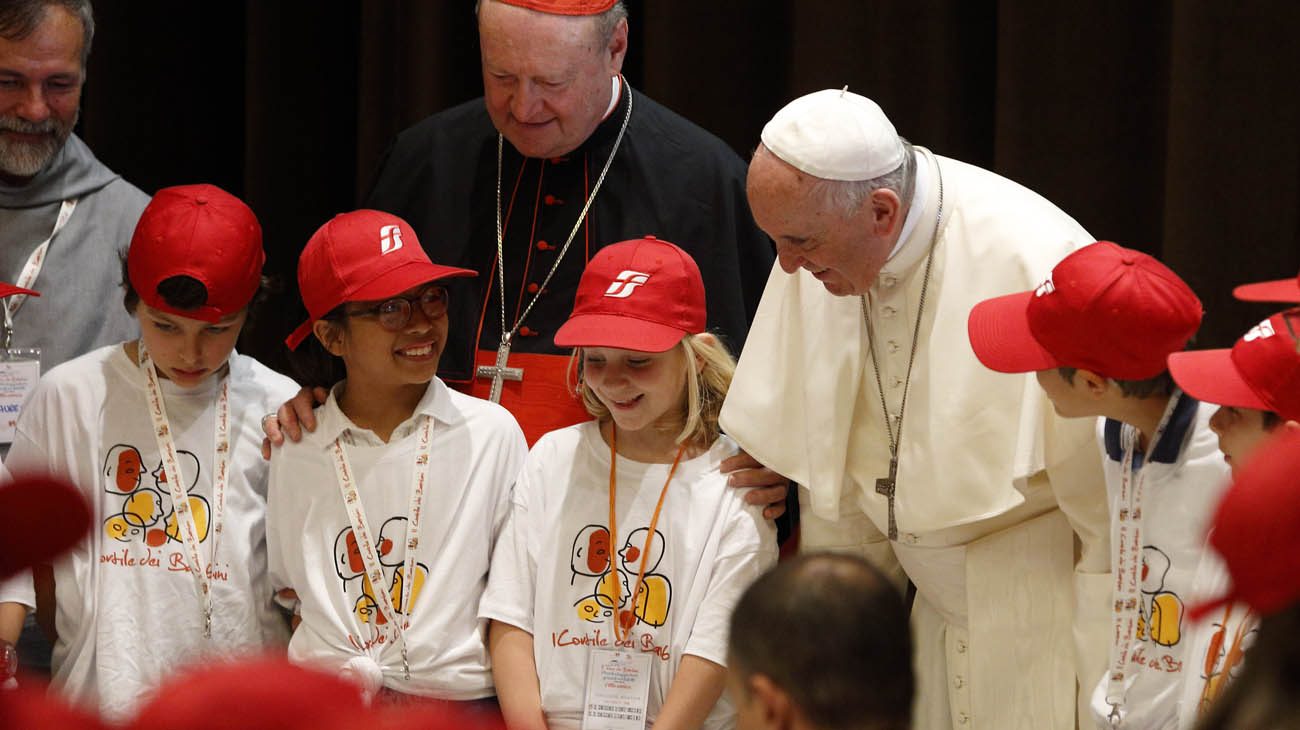 Pope Francis talks with children participating in the "Train of Children" audience at the Vatican June 9. Children from poor suburbs outside Milan arrived on a train that stopped at the Vatican. Also pictured is Cardinal Gianfranco Ravasi, president of the Pontifical Council for Culture. (CNS photo/Paul Haring)

VATICAN CITY (CNS) — Pope Francis told Italian schoolchildren that he grew up in Buenos Aires, Argentina, “the most beautiful city in the world,” and that besides playing soccer, he loved to fly kites as a child.

“We would make them with cane and paper, light paper. We made them ourselves,” the pope told about 500 children from schools in the poorer neighborhoods of Rome and of Milan. In the kite championship, he added, there were prizes for “the prettiest one and for the one that went highest.”

With the children seated around him in the atrium of the Vatican audience hall, Pope Francis answered their questions about his childhood, his school, his vocation and the standard question children ask him, “How did you feel when you were chosen pope?”

Meeting the pope was the culmination of the “Children’s Train” initiative of the Pontifical Council for Culture and the Italian state railroad.

“Can a tree whose roots have been removed produce flowers?” the pope asked. The children shouted, “No.”

People, too, have roots, he said. There are “spiritual roots, home, family and school. That is why I say don’t forget your schools because they are roots of your culture.”

“Do you remember what your teachers were like?” Anna Greta asked the 81-year-old pope.

He said one of his favorite teachers was named Estela; he was in her class both for first and third grade.

“She was great. She taught us how to write and read,” the pope said. Even years later, he said, he remembered her with gratitude because she helped him get started in learning.

“Already as a teenager, then as a priest, I would phone her,” he said. “Then, as a bishop, I helped her when she was sick. She died when she was 94 years old.”

A boy named Malak asked the pope how he came to understand “that you were to live the life that you lived?”

“I understood in pieces,” the pope answered. First, he decided to study chemistry and he worked as a chemist in a lab for four years, “and I liked this. But at a certain point, I understood that it did not fulfill me very much and I thought I should do something for others,” like maybe be a doctor.

But then, he said, one year on “the first day of spring in Argentina, Sept. 21,” because it’s in the southern hemisphere, “I felt in my heart that I should become a priest. Bam. In a flash.”

NEXT: Pope’s August visit to Ireland will include quick trip to Knock